I love spy movies, so I was immediately intrigued by The Courier which is set during the Cold War. It’s based on a true story of Greville Wynne, a middle-class businessman whose frequent travel to Eastern Europe got him recruited by CIA and MI6 as their spy. There’s a John Le Carré feel to the trailer and the fact that unlike the Bond movies, it shows the non-glamorous side of espionage. I really like A Most Wanted Man and Tinker Tailor Soldier Spy, the latter also starred Benedict Cumberbatch. This time, he plays the title role. 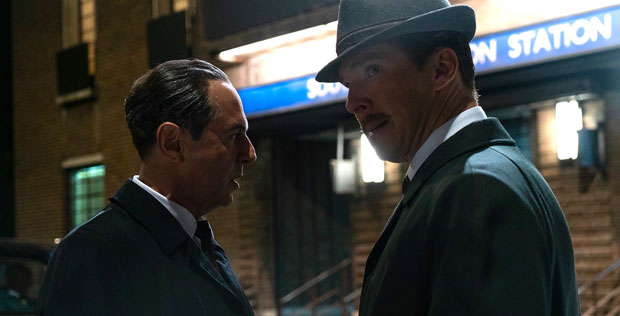 It all started with a letter from Oleg Penkovsky (Merab Ninidze), a member of the Soviet Intelligence Agency (GRU) who was concerned for world safety as he felt his country, under Nikita Khrushchev’s leadership, was on the brink of nuclear war with the US. His intel set the motion for MI6 and CIA to join forces and recruit an unlikely spy. The idea is to get a British salesman to pose as Penkovsky’s business partner as a cover while they work to gain intel relating to Soviet missiles being transported to Cuba.

All of that sounds really intriguing on paper, even the trailer made it look really captivating and suspenseful. Unfortunately, it doesn’t translate to the actual movie. Even the way Wynne was recruited didn’t play out as interesting as one would expect. Angus Wright and Rachel Brosnahan may look the part as MI6 and CIA agent respectivelly, but they aren’t that convincing in their roles. Brosnahan in particular, seems like she hasn’t quite escaped her Marvelous Mrs. Maisel role which makes her feel out of place in this movie. The way they often blurt out highly-classified information loudly in public also feels unrealistic.

Director Dominic Cooke, working from a script by Tom O’Connor is a theatre director and this is his sophomore feature effort. I don’t mind the slower pace and the fact that it started out slow, unfortunately it never quite gained momentum. The espionage scenes aren’t particularly gripping or suspenseful enough until the end, which feels a little too late. There’s also the undercooked drama between Wynne and his family that’s supposed to illustrate the underlying marital tension, but it all feels flat and rather emotionless.

Now, most of the performances are actually good. While he’s done eccentric flashy roles like Sherlock and Dr. Strange, I think Cumberbatch is suitable to play the ‘everyman’ character as he does here. I’m not going to give too much away but he’s so committed in this role that he went the Christian-Bale route towards the end. His character’s transformation and sudden zeal of bravery seems to have come out of left field though. The script never really explore his motivations and his friendship with Penkovsky seems superficial in the way it was portrayed. As for Ninidse, I’ve never seen the Georgian actor in anything before, but he definitely gives a strong and empathetic performance here as Penkovsky. Rising star Jessie Buckley as Wynne’s wife also have her moments that elevate her from just being an ordinary housewife. Unfortunately, there’s a profound lack of character development, particularly in regards to Wynne that it’s hard to get fully invested in his extraordinary journey.

I think the real issue is in the script, direction and overall aesthetic… in that order. The Cuban Missile Crisis is obviously a captivating subject matter, add the humanistic element to it and you should’ve gotten something really special. Yet, this movie is serviceable at best, with boiler-plate production design that offers the bare minimum to pass as believable. It’s quite surprising given the star power. I can’t even remember any particularly memorably shot from the film either, but overall the film feels dark and drab. I think a more capable filmmaker that’s well-suited for this genre could’ve made this much more exciting and meaningful.

Oh, and the original title is Ironbark (Penkovsky’s code name) which is much more interesting than the generic title they go with now. Well, The Courier ends up being a generic and ho-hum spy film that recall similar, much more memorable movies set during the Cold War. I’d say it’s worth a rent only if you’re a huge fan of the cast, but they’re way better in other films.

Have you seen The Courier? Well, what did you think?