I have to admit that though I’ve heard news about the opioid crisis, I’m not really that familiar with the subject. In fact, prior to watching this film I didn’t even know what Fentanyl was, which is apparently a powerful synthetic pain killers that’s similar to morphine but is 50 to 100 times more potent. It’s certainly an important subject matter, and even a timely one had our attention been completely absorbed by the Covid pandemic as this epidemic also kills people at an alarming rate.

The film features three main storylines that’s seemingly random at first, but you know they’d converge in the end. There’s Jake (Armie Hammer), an undercover DEA officer working to broker deal involving the lucrative Fentanyl between a Canadian supplier (code-named Mother) and some Armenian drug lords. This operation is a personal one for Jake as his own sister (Lily Rose-Depp) is addicted to OxyContin. Claire, an architect (Evangeline Lily) who’s a former addict tries to figure out the truth about what happened to her lost teenage son. Lastly, there’s Dr. Tyrone Brower (Gary Oldman) in a David vs Goliath story battling a pharmaceutical giant Northlight when his research of their new “non-addictive” painkiller finds that the drug is even more dangerous than its predecessor.

The multiple narratives naturally reminds you of Steven Soderbergh’s highly-acclaimed war-on-drugs drama Traffic, but I don’t think it’s fair to immediately brush this one off as this one is a pretty solid film in its own right. The opening chase sequence of a boy with a backpack full of pills in a wintry Canadian landscape is a good way to propels the story. It immediately intrigues me to find out what’s at stake for the characters we’re about to meet. Jake, Claire and Tyrone may be fighting against different types of people, but essentially they’re in the same battle, that is the war on opioids. The script is written by Nicholas Jarecki whose 2012 debut feature Arbitrage is an excellent film that also deals with power and corruption. Jarecki ups the ante here by not only adding multiple-layers to the story, but also by acting in it as Jake’s partner at the DEA. 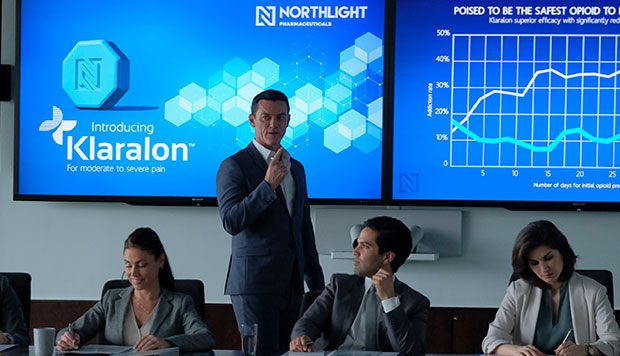 Out of the three narratives, I find Oldman’s scenario between the professor + big Pharma (with Luke Evans & Veronica Ferres as the faces representing the corporate giant) to be the most intriguing. Obviously the stake is high for each character, but Tyrone is fighting the big guns who puts this dangerous drugs on the market in the first place at the risk of not only his job but his reputation. Of course the university dean (Greg Kinnear) wants Tyrone to just look the other way as big Pharma is the school’s big donor. There’s a tense exchange between the two actors where Oldman yells that this is the worst medical crisis since tobacco. Some of the dialog like this one might be too on the nose, even clichéd, but the actors’ committed performances still able to make them work. I also appreciate that Jarecki don’t paint the protagonists as saints… they’re all flawed people who have made errors in the past but want to do the right thing and find the truth. 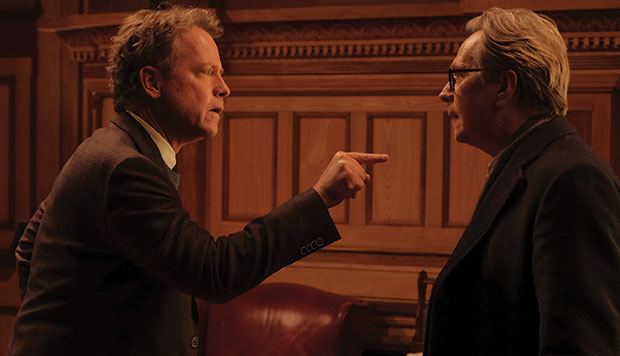 Performance-wise, Oldman is excellent in a layered performance that allows him to be both intense and vulnerable. While he’s a well-respected professor, he’s also a husband and would-be father who fears he won’t be able to provide for his wife (Indira Varma) and family if his reputation is tarnished. His inner struggle feels believable and real and his charismatic screen presence always elevates any film. It’s interesting to see his character against drug addiction here, given the first role I remember him play is a pill-popping detective in Léon: The Professional.

I think Evangeline Lily is quite strong here despite some of the overly-melodramatic moments. I think I’d be fine with the extended scenes of her mourning her son, but it provides such a stark contrast when she suddenly becomes a vigilante. Her storyline stretches incredulity in parts, especially as she crosses paths with Jake as they suddenly have a common enemy. At the same time, the short interactions between them help ground her character. 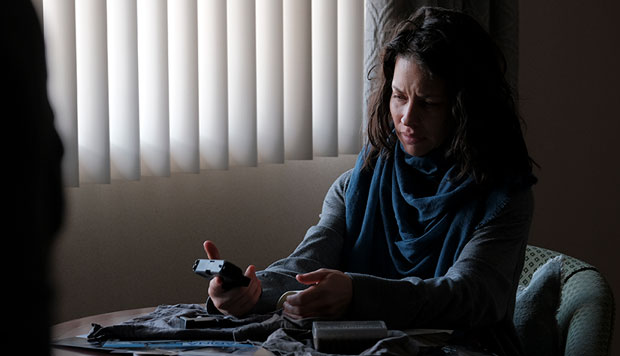 As for Armie Hammer, who at the time of this film’s release was undergoing a personal crisis on his own, plays a pretty run-of-the-mill cop here. Whether or not his involvement in this film impacts its reception is debatable, but it certainly seem to have taken over the discussion. Most of the commentaries on social media about this movie usually centered on his fall from grace. I think Hammer is generally a decent but not overly charismatic actor. Despite his good looks, somehow he never really lights up the screen, and that’s the case here. He’s either morose or angry for the entire film, where more capable actors could’ve added more nuance to this integral role. There are so many familiar faces in this film, Michelle Rodriguez and Kid Cudi also made a brief, but memorable appearance.

Overall CRISIS is an engaging thriller that’s pretty easy to follow. The script might seem overstuffed with strings being pulled in several directions, but it didn’t become a tangled mess when they all converge. There are parts that are predictable that I saw a mile away, but there are still moments that surprise me as well. This one isn’t as stellar as Arbitrage but still a worthy sophomore effort from the talented writer/director. I’d be interested to see what else Jarecki will tackle next, hopefully it wouldn’t take him nearly a decade to come up with his next project.

Have you seen CRISIS? Well, what did you think?