There are certain movies that become family tradition around Christmas… from classics like White Christmas, It’s A Wonderful Life to more contemporary fare like Scrooged, Home Alone, Elf, and of course, the ‘honorary’ Christmas action flick of all time, Die Hard. Some people might opt for the plethora of Christmas rom-coms, which if you are one the you are in luck as Netflix has a bazillion of them that rival even the Hallmark channel!

I have to admit, I did watch three Christmas rom-coms in early December – Jingle, Jangle: A Christmas Journey (which I’ve blogged about here), The Holiday Calendar (meh!) and Last Christmas. That last one is not perfect but given it’s written by Emma Thompson and I grew up loving George Michael’s songs, the movie has its charm and I ended up enjoying it quite a bit. I might even do a Music Break post at some point.

Now, I’ve written about some of the movies on this list, but hey, they’re still my faves so I’m including them again here. Some of them on this list aren’t exactly Christmas movies per se, but there are some memorable scenes that you associate with the season that gets you in the holiday spirit. 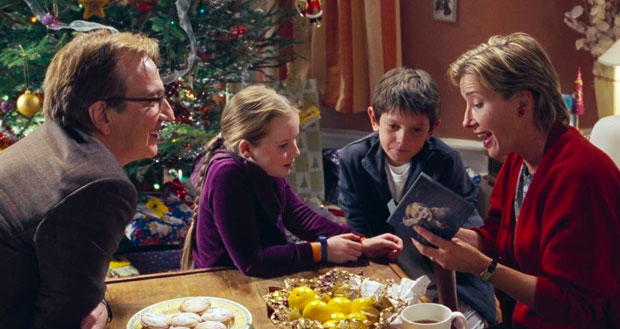 I love many Richard Curtis’ movies and this one is chock full of my favorite British actors so naturally it’s one of my go-tos around the holidays. The sappy cards-on-the-doorstep bit is everyone’s favorites, but I have to say Emma Thompson is the scene stealer here and her storyline as a dutiful wife who suspects her husband (played by the venerable Alan Rickman) is cheating on her with his hot co-worker never fails to bring tears to my eyes. 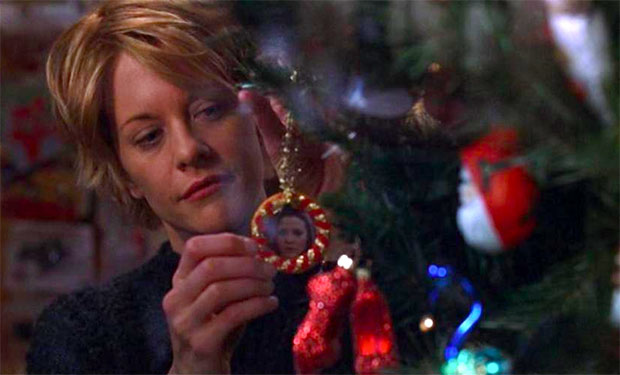 I’ve mentioned this movie oh-so-many-times on this blog for obvious reasons. NYC is particularly festive and lovely during Christmas season with all the sparkling lights. But it’s the quiet moments that always gets me… Katherine misses her mother as she decorates the Christmas tree at the store her late mom had built. We all miss our loved ones during the holidays, and this year is particularly tough as we can’t even spend time with our family/friends because of the lockdown.

Ok so this movie has issues and I have to say I have a hard time watching Cameron Diaz’s character at times. But the Kate Winslet’s storyline is much more intriguing of the two. I sure can relate to her falling hopelessly in love with a hot-but-caddish co-worker at a Christmas party… and I love her reaction when she found out just how amazing Diaz’s LA house is.

Speaking of house, Jude Law’s home is one of the dreamiest Christmas homes that actually looked believably lived-in. It’s got that warm + cozy feeling right from the entry hall. 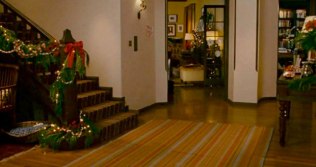 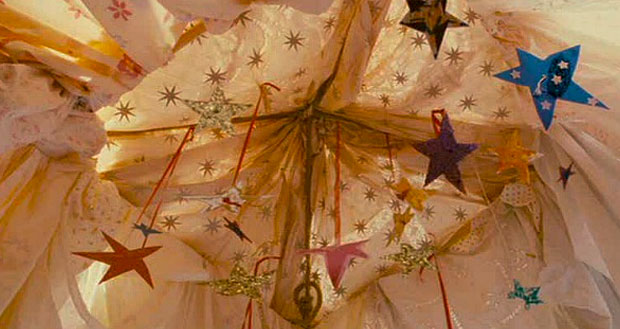 According to this article, apparently this enchanting Mill House is located in Wonersh, Surrey. Another reason I can’t wait to go visit the UK again once this pandemic is all over!

Based on a true story of an unofficial Christmas truce in December 1914, this film truly conveys the real meaning of Christmas. Such a wonderful film that shows an uplifting lesson in humanity, though the truce is such a brief one and the troops from three countries had to pay the price for their disobedience.

I highly recommend this one if you haven’t already. Here’s a clip of the singing scene.

Per IMDb, the character of the opera singer is based on that of German tenor Walter Kirchhoff (1879-1951), who travelled to the front in order to perform for the troops. His performance was met by cheers from the French lines, where upon he decided to climb on to no-mans-land to see who was cheering.

I actually just bought the blu-ray of this one. I figured I’d get a lot of watch out of it that it’s better to buy it instead of renting. Helen Fielding created such a fun, relatable character in Bridget and the movie still made me laugh after all these years. Fielding wrote the screenplay along with two of my fave British writers, Andrew Davies (responsible for a bunch of Jane Austen adaptations) and Richard Curtis (natch!). Texas-born Renée Zellweger is simply marvelous as Bridget, which proves she’s quite a versatile actress who made the iconic British character her own. It’s quite fun seeing Hugh Grant playing a cad, too, which I think is closer to his own persona than the goody-two-shoes roles of his other rom-coms.

This Oscar-nominated animated movie is such a wonder. Per IMDb, director Sergio Pablos had wanted to do a traditionally animated feature film, so the studio used CGI lighting techniques with hand-drawn animation to create a unique animation style for the story. The visuals are simply amazing to behold, but it’s the story that warms your heart. An imaginative take of a classic about a postman who befriends toymaker Klaus, whose friendship ends up changing the lives of the people in two feuding towns. The quintessential feel-good family movie that’ll make you laugh and cry… I know I’ll be watching this for years to come.

I saw this quite a while ago and despite it being a mash-up of Frank Capra’s It’s a Wonderful Life and Dicken’s A Christmas Carol, it’s still got its charms. Nic Cage is basically Scrooge, a successful, narcissistic business man who thinks he’s got it all. Then he meets Don Cheadle one fateful night and he’s given a glimpse of an alternate universe of what might’ve been if he hadn’t leave his college girlfriend and married her instead. Funny and heartwarming, it’s the kind of movie that makes you reflect on your own life and figure out just what’s really important to you.

I just watched Netflix’s The Holiday Movies That Made Us documentary series which shows the real stories behind these iconic Christmas blockbusters, thanks to insider interviews and behind-the-scenes peeks. The ELF episode is especially fascinating for me who’s striving to make a feature film, as it shows just how challenging it is to make a movie. Everything had to align just right and even so, there’s no guarantee the movie would be a hit.

It seems Will Ferrell was born to play the Elf who travels from North Pole to NYC to locate his father after discovering he is a human. Beautifully written by David Berenbaum, who made this as an homage to his own father, this movie has the crucial ingredient for a Christmas classic: a big, huge heart. I forgot that Jon Favreau directed this, which further proves he’s one of the most talented and versatile filmmakers working in Hollywood today.

I actually just watched this a couple of days ago and though it’s not a movie, I simply had to include it on this list. This popular British sit-com is yet another one of Richard Curtis‘ creations and it’s so brilliantly funny and irreverent. Dawn French is hilarious as the boisterous female minister (vicar) Geraldine Granger who serves in an eccentrically-conservative small town’s church.

This Christmas episode is actually the final season, consisting of just two episode where Geraldine gets swept off her feet by a handsome stranger (Richard Armitage) and finally becomes the bride after officiating thousands of weddings. I love that Geraldine also loves Sense and Sensibility, she’s in fact shown to be watching the Ang Lee version on the show! Interestingly, James Fleet, who plays Hugo Horton in the series, played John Dashwood in the Jane Austen movie.

I found some excerpts of this episode in Vimeo, so enjoy!

I saw this a decade ago for the first time and I haven’t re-watched it since, so some details were quite hazy to me. Well, I’m glad I rewatched this two days before I wrote this list, as I’ve come to appreciate this Christmas classic even more!

I love James Stewart‘s moving performance as George Bailey, despite the character being originally developed at another studio with Cary Grant in mind. Apparently this was Donna Reed’s first starring role as she’s wonderful as Bailey’s love interest Mary, who I think is as much a savior in Bailey’s life as Clarence the angel. Frank Capra cited this as one of his favorite films and it’s certainly has stood the test of time. Yes it’s melodramatic at times and some of the scenes are a product of its time, but the uplifting and inspiring message is one that generations to come would still enjoy and relate to. Given the pandemic and many of us feeling down and perhaps even desolate, this story resonates even more.

This is the most iconic scenes in the film and perhaps ranks as the most indelible one in all classic films. Even though I had seen this before and it’s one of the most shared clips/gifs, I still can’t help feeling really emotional watching this. Bailey’s problems of being $8,000 short still remains, but his outlook on life has drastically changed. The part when he wished the evil Mr. Potter a Merry Christmas through his office window is both funny and touching.

Per IMDb, the set for Bedford Falls was constructed in two months and was one of the longest sets that had ever been made for an American movie.

Despite being set around Christmas, the film was filmed during a heat wave, in fact this exact scene was actually filmed on a scorching July day. It got to be so hot that director Frank Capra gave everyone a day off to recuperate.

In the spirit of Christmas AND his love for Star Wars, my hubby made this mash-up arrangement. Hope you enjoy it! 🙂

Here’s wishing all of you

14 thoughts on “10 Favorite Movies To Watch at Christmas Time”