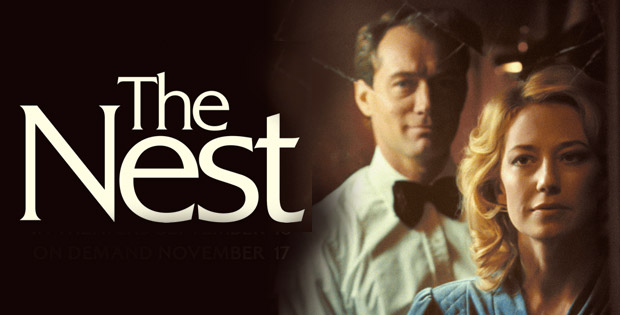 I saw The Nest on a screener thanks to IFC Films and the premise intrigued me immediately. Jude Law and Carrie Coon Life play husband and wife whose already-fragile marriage take a twisted turn after moving into an English country manor.

The film opens when the family still resides in the US. Rory O’Hara (Law) is shown taking the kids to school, and Allison (Coon) works as a horse trainer. The O’Hara seems like the perfect family – live in a nice house with a pool and everything seems normal. Rory seems like the perfect dad to his young son Ben (Charlie Shotwell), and their daughter Sam (Oona Roche) seems like a typical angsty teen. Then suddenly one morning, Rory tells Allison he wants to move back to England. It’s not clear at first just what it is Rory does, but he assures his wife that she’d never have to work and they can live like royalty.

Despite her initial refusal, Allison agrees to uproot her family to England. They even take move her horse Richmond all the way across the Atlantic. Once they’re in the UK, Rory excitedly gives his family a tour to a large farm mansion in the London suburb of Surrey. I kind of get a Devil’s Advocate vibe and the mood of the film, which decidedly shot like a horror film by cinematographer Mátyás Erdély (Son Of Saul), makes it look like there’s something ominous about the house. There’s even a moment where Allison scream to her kids ‘you’re both are strangers to me’ after hearing noises in the house at night, which seems to come out of nowhere. I wonder if perhaps Durkin is saying that the real ‘horror’ of this family breakdown has nothing to do with the house, or external forces… that real evil can come from within each person. 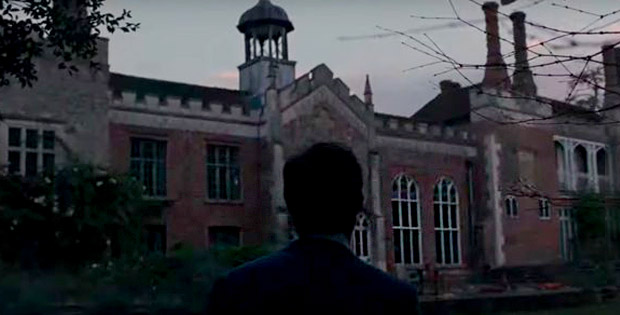 Set in the early 80s during Thatcher-Reagan era, the film’s theme plays with the idea of the American dream and ‘fake it until you make it’ adage, and we later learn Rory’s lucrative job as a commodity broker is what he thinks would enable him to achieve the ‘dream’ he’s imagined for himself and his family. Without giving too much away, The Nest is family drama/cautionary tale of greed and ambition run amok. It’s as if this is the antithesis to the famous line from Wall Street that ‘greed is good.’ Well, we don’t have to watch this film to realize that, but filmmaker Sean Durkin hammers that message quite potently here.

This is the first of Durkin’s work I’ve seen so far, which is his sophomore writing/directing feature film he did since the highly-acclaimed Martha Marcy May Marlene. I think Durkin is a talented filmmaker and has a pretty unique storytelling style. The way the tension keeps on building, and using Allison’s horse as a metaphor for their crumbling marriage is pretty effective. That said, I’m not seeing the film is without flaws.

For one, the pacing is quite slow, and while I don’t mind slow films, there’s a sense of dread and unnecessary doom & gloom feel that makes the film seems lethargic. There are also some events happening in the film that seem foreboding but in the end amount to nothing, which isn’t frustrating necessarily, I just find it quite odd.I think some viewers would also find it quite frustrating that there’s no truly-sympathetic characters in this film, except for the subtle gesture of kindness from Sam towards the end. I like Allison and she’s quite a strong female figure, but the way she finally snaps at Rory during a client meeting doesn’t exactly paint her character in a compassionate light. She also seems far more obsessed with her horse than she is with her kids, at least the way it’s presented in the film. 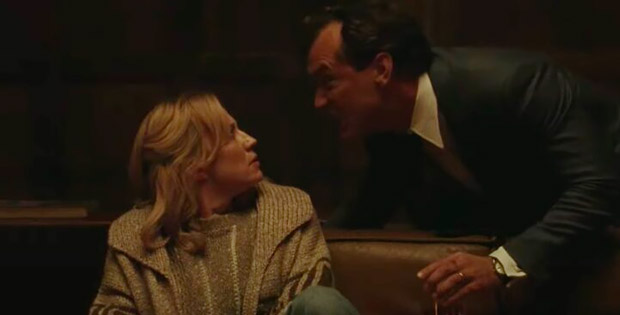 The strong point in this film is definitely the performances. Jude Law is believable as a man with delusions of grandeur and unbridled ambition to get to the top. Though at times Rory’s actions seems absurd, you don’t completely hate the man, in fact I feel really sorry for him. The conversation with the Uber/Lyft driver is quite a turning point for Rory and perhaps one of my favorite scenes in the film. Carrie Coon is an actress I’m not familiar with at all (apparently she was in Avengers: Infinity War but unrecognizable in CG makeup as one of Thanos’ warrior minions), but I’m very impressed with her here. There’s an effortlessly cool vibe about her and she has a palpable chemistry with Law. British-Pakistani actor Adeel Akhtar and Irish actor Michael Culkin are both reliable character actors and both lend memorable performances as Rory’s colleague and boss, respectively.

Overall, I admire Durkin’s talent as a filmmaker even though I’m not overly fond of the film. As I mentioned above, there’s a sense of dread throughout, so this one isn’t exactly a pleasant film to watch. I’d still recommend it to film enthusiasts as I think it’s well-crafted, though I’m not sure this film would be a hit with mainstream audiences despite Jude Law being in it.

THE NEST is now available to stream across all cable and digital VOD platforms for rent: iTunes, Amazon, GooglePlay, YouTube, Vudu, PlayStation, Xbox.

Have you seen THE NEST? Well, what did you think?