I know lots of people have been watching all kinds of epidemic-related movies lately given the Coronavirus outbreak. Apparently Contagion, Outbreak, etc. have gained popularity in rentals, as well as in torrent downloads!

Well, my hubby and I actually decided to watch something equally grim and also proven to be quite lethal. It started with my husband who watched parts of the documentary The Devil We Know with his co-workers, so we decided to make that and the feature film version, Dark Waters as a double feature. 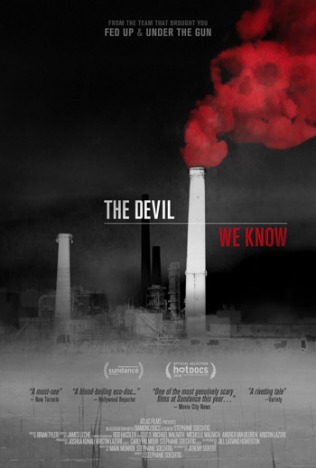 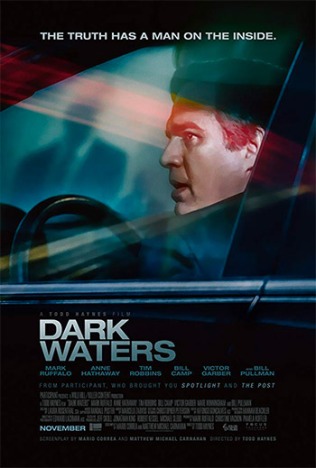 Directed by Stephanie Soechtig, The Devil We Know documentary uncovers one of the biggest environmental scandals of our time. It focuses on a group of citizens in Parkersburg, West Virginia taking on a powerful corporation, DuPont, after they discover it has knowingly been dumping a toxic chemical known as C8 into the local drinking water supply. PFOA (Perfluorooctanoic acid) chemicals is found in Teflon and many other products that have become a staple to Americans, so obviously it’s a hugely lucrative business for DuPont. Workers at the DuPont plant had given birth to deformed children, suffered from cancer caused by the toxic chemicals, AND local farmers lost many of their herds because of it. The scariest part is, C8 is apparently found in the blood of 99.7% of Americans!

It’s scary that the term ‘the devil we know’ is actually in one of the documentations in regards to the scandal, as DuPont knew how dangerous C8 chemical was to humans for decades. In fact, even after 3M informed DuPont that PFOS causes liver cancer in rats, and 3M began phasing out PFOS and PFOA in 2000, DuPont still refused to do likewise.

One of the most heart-wrenching individuals featured in The Devil We Know is Bucky Bailey, whose mom worked in the Teflon sector of DuPont when she was pregnant. Bucky was born with one nostril and one eye lower than the other, enduring multiple surgeries since he was an infant. It was so devastating to watch him fearing that his own child would be born the same way, that’s just one of the shocking stories of victims impacted by this horrifying chemical contamination.

We actually watched Dark Waters first before we watched the documentary the next day. The film centered on Robert Bilott (Mark Ruffalo), a corporate defense attorney who took on an environmental lawsuit against DuPont. Starting in the late 90s, the film chronicled Bilott’s relentless legal battle despite being initially reluctant to do so. A farmer from Parkersburg, Wilbur Tennant (Bill Camp), who knew Bilott’s grandmother, came into his law office and gave me numerous VHS tapes of his recording of his cows all dying mysteriously, suffering from bloated organs, blackened teeth, and tumors.

There’s such a consistent dread in the film that almost made you feel sickened by the toxic chemicals and the audacity of the DuPont executives. Bilott is also featured in The Devil We Know documentary, and though Ruffalo’s mannerism don’t seem to resemble the real attorney, I think he captured his passion and tenacity. Bilott risked a lot to take on this project for about 20 years, including his own job and his family. The strain in his marriage is palpable as he began to get dragged deeper and deeper into the case while DuPont remained defiant. Anne Hathaway played his wife Sarah, and Anne is quite effective here in a memorable supporting role.

As with many dramatizations, there are some things the film embellished, you can read more about the truth vs fiction here. The film is directed by Todd Haynes, who I have to admit is an interesting choice, but I think he did a pretty good job. It’s more of a slow-burn drama that shows the arduous David vs. Goliath battle. I certainly came away feeling furious that such a thing was allowed to happen, amazed that such dangerous substance wasn’t regulated by the EPA, and horrified how companies like DuPont managed to get away with practically everything. I mean, the $16.5 million fines from EPA, even the hundreds of million in case settlements, are really just a drop in the bucket for a company that earn tens of billions a year selling products with PFOA.

Both the doc and dramatic feature are eye-opening and unsettling, but both get the message across about this environmental scandal. Dark Waters isn’t quite as gripping as Michael Mann’s The Insider however, which carries a similar theme about a whistleblower Jeffrey Wigand (played brilliantly by Russell Crowe) going against the huge tobacco companies. Still, I highly recommend these two films and they work perfectly as a double feature!

Have you seen either the film or the documentary? Well, what did you think?