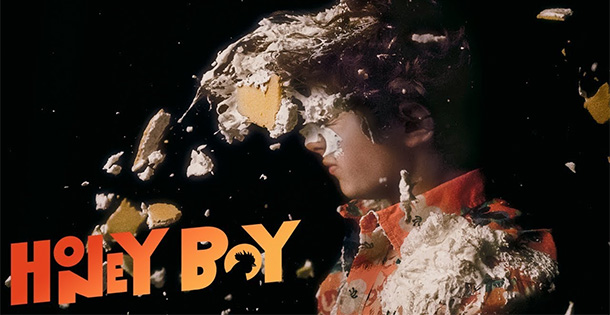 Honey Boy surprised me. I expected it to be intense, but the film exceeded those expectations. Young Otis Lort (played by Noah Jupe, who, among other victories, perfectly nails his American accent) has started to make it in Hollywood. His father, James (Shia LaBeouf), shuttles him between their motel and set on his motorcycle every day, fathering him as well as he can, but inhibited by his personal demons. Honey Boy cuts this story with one of young adult Otis (Lucas Hedges), who is spinning out of control. A drunken encounter with the police lands him in rehab where he must confront the demons he inherited from his father. Honey Boy is an emotional whirlwind sprinkled with magical realism: a beautiful film that is finely coated with a layer of grime.

Alma Har’el’s direction of Honey Boy is exceptional. The emotional intensity of the movie is at a constant high, but Har’el skillfully controls the tone, keeping the audience so invested that it is only once the ending credits begin to roll that we realize exactly how emotionally taxing watching the film is. Har’el safely and elegantly navigates her actors (especially Jupe) through fraught emotional terrain while maintaining a beautiful visual aesthetic. She also notably lets the script’s snark about rehab shine through without minimizing rehab’s positive impact on Otis.

All that said, I am so curious what the on-set relationship between LaBeouf and Har’el looked like. Although LaBeouf is only officially credited as writer and actor, it seems inevitable that LaBeouf would have had some directorial insights for such a personal project.  (As I’m sure you’ve already heard, writing this screenplay, based on his life, was part of LaBeouf’s recovery process). This curiosity especially comes into play in scenes like the one where LaBeouf plays James Lort at an AA meeting. Tears quivering in his eyes, James describes his love for his son, his deep pain, and how that pain often inhibits the expression of his love. How much of this moment was pure LaBeouf? How much was Har’el? I. am. so. curious.

LaBeouf’s inherent empathy for and understanding of his father (and Har’el’s ability to portray their fraught, but undeniably close relationship) is exactly why this movie works so well. In a therapy session, the young adult iteration of Otis Lort insists that his father is not the cause of his problems: James Lort is the reason that Otis has been successful. Despite all the pain, all the arguments, all the questionable parenting choices, Otis understands that at his father’s core it was all love. The fact that his father’s love was frequently overshadowed by his demons is as irrelevant as it was painful.

There are no weak actors in this film. You will love FKA Twigs despite yourself: she will make your skin crawl. Lucas Hedges is the eye of a hurricane: a ball of angry energy waiting for any excuse to snap. Byron Bowers is funny and subtle. Noah Jupe, surrounded by strong performers, still somehow carries the film on his tiny, twelve-year old shoulders. He perfectly captures a double-sided coin of innocence and premature adulthood. I dare you not to cry when his parents use him as a literal conduit for one of their arguments. And, of course, Shia LaBeouf will rip your damn heart out.

There are so many smart, artistic choices to unpack in Honey Boy. For one, I think it’s safe to assume that LaBeouf’s choice to rename himself Otis is in reference to Odysseus’ renaming himself “Outis” [ie “nobody”] when he encountered Polyphemus. And there is so much to discuss about that choice. For another, the magical realism that is otherwise a delightfully glowing subtext to the story, peaks toward the end of the film when young adult Otis and his father share a moment that is almost guaranteed to make your head spin. Visually majestic, contextually complex, and full of award-worthy performances, Honey Boy is not a film to miss.

I can only hope that LaBeouf continues to write. He is a gifted storyteller and we’re lucky to have him.

Have you seen HONEY BOY? What did you think?