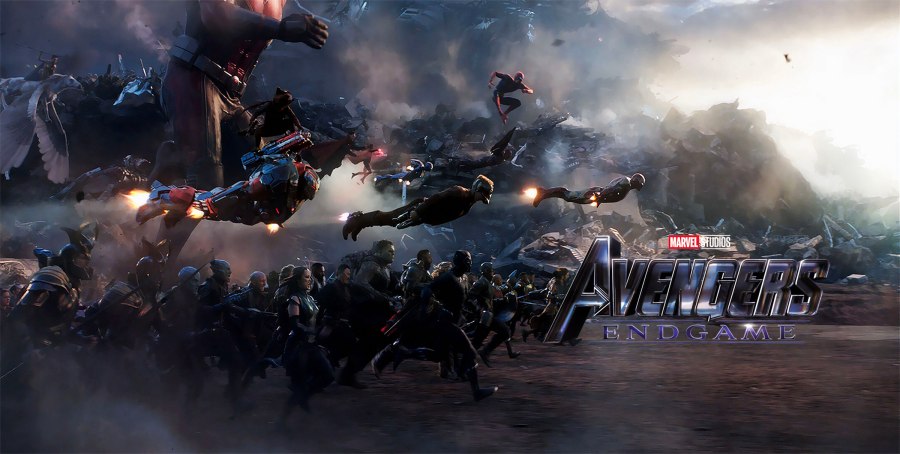 Marvel Studios celebrated the in-home release of Avengers: Endgame with the ‘WE LOVE YOU 3000’ tour. Those who have seen that movie knows the significance of that line, uttered by Iron Man‘s cutie-patootie daughter. 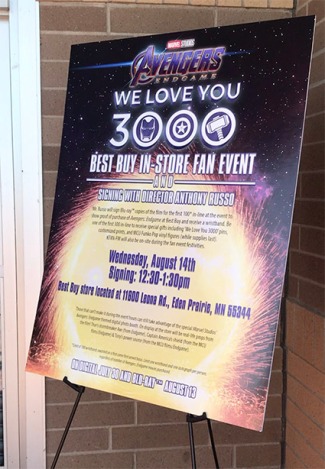 Nine cities and 3,000 giveaways, it’s Marvel’s way to thank fans who’ve invested 11 years in the MCU! Beginning in San Diego at Comic-Con International on July 20 and ending in Anaheim at D23 Expo 2019 the weekend of Aug. 23-25, special guests from Marvel Studios and the MCU greeted fans at various cities.

So, last Wednesday August 14, Best Buy hosted director Anthony Russo for fan meet-n-greet and signing. Thanks to Allied Global Marketing, I and three other MN film bloggers got a chance to interview Mr. Russo on the red carpet prior to the fan event.

On Display at Best Buy were a few props from Endgame, including the broken Captain America’s shield at the hands of Thanos’ mighty sword.

So I was part of the red carpet interview with fellow Twin Cities film bloggers, Paul McGuire Grimes from Paul’s Trip To The Movies, Jared Huizenga from Man Versus Movie, and Mark McPherson from TwinCitiesGeek.com. Each of us took turns asking Anthony Russo a question, but because of time constraints, we only got to ask 1-2 questions each.

Listen below for the Q&A with Anthony Russo:

Paul: I have to ask what your first thoughts were when Kevin Feige told you and your brother Joe that you’d be directing the last two Avengers movies?

Ruth: In regards to your time working in the MCU, what makes you the proudest?

I’m proud that we put our best work in and I’m also grateful that it ended up working for others.

Jared: Now that we’ve come to the end of the Infinity Saga and there are 21 films. Which one is your favorite?

Mark: There’s a lot of elements you juggled on Endgame. Was there any one key aspect that you wanted to maintain throughout Endgame as things were changing?

The important things for us is in regards to the character who’s going to die in the film. We made sure we give Tony Stark a proper arc, to give them the most we could do with that arc…

Ruth: How’s your working relationship is w/ the two writers, Christopher Markus + Stephen McFeely whom they’ve worked together for 4 movies. Was there ever any friction between all four of you, and if so how did you resolve that?

“Why my brother and I like to work as a team is because we have opposing points of views… it’s like point, counterpoint, point, counterpoint, it’s like a socratic dialogue we have all day long. We love that. So not disagreeing is actually a part of why the creative relationship has value, because it helps you heat up your ideas and pushes out of your comfort zone…”

Thank you Mr. Russo for chatting with us!
Your fans love you 3000 🙂

Have you seen Avengers:Endgame? Feel free to share your thoughts about the film and/or the interviews.

2 thoughts on “Interview with Avengers: Endgame’s co-director Anthony Russo – ‘We Love You 3,000’ Tour”