Synopsis: A man is attacked at random on the street. He enlists at a local dojo, led by a charismatic and mysterious sensei, in an effort to learn how to defend himself.

I met Jesse Eisenberg when I was an extra on the film End of the Tour when it was filming in Minnesota along with Jason Segel and Joan Cusack. As an extra I was instructed not to approach him, or talk to him and especially don’t ask for a picture. I stood next to him. He smiled at me, shook his head and acknowledging me, said hello. That was the extent of us meeting. There are well founded reasons for this set etiquette and overzealous celebrity worshipping fans is just one of them. That is not me. Of course, most of the footage of me was cut. What neither Jesse nor I knew then, standing next to each other, is that he would portray a character with striking resemblance to my life in the film The Art of Self Defense.

As a child and a teenager, I was severely bullied. When I was 16 years old I joined a martial arts school that was a front for one of the most notorious martial arts cults, The School of Chung Moo Quan. I have been outspoken about my experience there since the early 1990s and so this gives me a unique perspective to review this film. The use of answering machines and other electronics placed the film in the 1990s period. This was a time when the martial arts and a black belt still had a mystical aura around them, but that was coming to an end.

In the beginning of the film, Jesse Eisenberg’s character Casey Davis is targeted and physically assaulted by a group of motorcyclists and hospitalized. Casey is timid, lonely, and socially awkward. His only companion is his beloved pet dachshund. According to mind control experts, cults seek out those that are vulnerable, that are lonely and lacking direction.

As Casey enters the school for the first time, unknown to him there was a hidden agenda. Upon meeting the school’s charismatic and mysterious instructor only known as Sensei, played by Alessandro Nivola. He offers Casey a chance to come back for the “Free Lesson”. This is common in most martial schools and in my case when I did them, they were an orchestrated part of the indoctrination process. Casey would be led into a journey of darkness that he would never had agreed to if he knew Sensei’s agenda to begin with.

Upon stepping onto the practice mat, Casey is still wearing his shoes. Anna, the female brown belt instructor played by Imogen Poots, is teaching the children’s class. She chastises him that if Sensei sees him on the mat, he would be beaten. On the wall of the school is a list of 10 rules and the 11th rule: “Guns are for the weak.” “No shoes on the mat” is rule number 1. In Chung Moo Quan, stepping into the practice area with shoes on normally would result in the student having to do pushups. At other times they would be beaten.

When I tell people that I had been in a martial arts cult, they are surprised that such a thing exists. But when you really think about it, it’s really not all that surprising. Martial arts have a leader, a master that is overtly praised, and rank and file observe a hierarchy created by the belts system. The myths and legends and mystical thinking of the martial arts, combined with the American ignorance of Asia, creates the perfect recipe for martial arts cults, some referred to as McDojo’s. It does not require any certification to open a martial arts school. Someone can get out of prison and open a school. I think that one of the only reasons you don’t see more of these cults is due to the efforts of legitimate schools to expose them.

During a promotional belt ceremony, the highest student in the class, Anna, was expecting to be promoted to black belt. As Sensei held the black belt in his hand, he announced that Thomas (Steve Terada) a lower belt than Anna standing on her left, was being promoted to black belt, now becoming her higher belt.  After he received his black belt he went back to the line and Anna was now in his spot and he ordered her to move to his left. She was now the second highest belt. In private, Sensei tells Casey,  “She will never become a black belt. I realize now that her being a woman will prevent her from ever being a man.”

You get the impression that Sensei at one time was in many ways just like Casey, which may have created a bond between the two men. Some might even call the beginning of a bromance. Now Sensei has become a symbol of masculine toxicity. Modeling of the leader is common in cults and Sensei tells Casey that his name is feminine. This might also give a clue to why he is just known as “Sensei”. Casey is told to stop learning French because the French are considered weak when it comes to war and he should learn language of a “tough country” like Germany. Casey has a German dog, a Dachshund, which Sensei says he should replace with a more intimidating German shepherd. Heavy metal is the best music, says Sensei, because it is “the most aggressive.” These things may seem comical, but imagine this in Chung Moo Quan. The leader was Master John C. Kim. He came from Korea, had a perm, and spoke with a broken accent. His instructors believed that he was the greatest martial arts master that ever lived. They emulated him, if he had a perm, they had a perm, if he spoke broken English, American-born men spoke broken English.

In Chung Moo Quan misogyny the hatred, contempt for, or prejudice against women is something that I experienced firsthand. In fact, on the first day of every month I was not allowed to sign a women up for lessons unless an adult male or even a boy was signed up first. It was believed that if a woman was signed up first, that bad luck would befall the school. Anna was attacked in the locker room by the male students. In Chung Moo Quan, a female instructor wrote that she was raped and became pregnant by an instructor. He ordered her to get an abortion and he would later die of aids.

Sensei goes inside of a secretive room to get Casey a uniform, a room where no students are allowed. During a class, Sensei tells the story of his grandmaster, who killed a man with secret technique for killing by punching through his opponent’s head with his index finger, stating “He was the great man who ever lived”.

This reminded me of a story a former student told me of how he went into such a room that was used for secret training and was caught by the instructor, beaten and after quitting the school, was followed for several months. Another story I was told was how our Martial Arts Master John C. Kim would injure and kill a person without even touching them and went as far as claiming responsibility for Bruce Lee’s death killing him by “Injury without touch”. If you are in a martial arts school and they have secret rooms or claim to offer secret martial arts techniques only known to them, this should be a red flag.

One of the students, Henry, played by David Zellner, wanted desperately to be part of Sensei night class, but in order to do so he had to be invited, by Sensei giving him a black stripe on his belt. There are some people rejected from cults for one reason or another. In Chung Moo Quan they called them “missing”. Henry shows up to the night class uninvited without the stripe on his belt. Sensei calls him to the mat for a demonstration, tells him to stretch his arm out and instead of demonstrating a move he breaks his elbow and kicks him out of the school.

The assault of students happened in my school and is well documented in lawsuits and government records. Even death had occurred inside Chung Moo Quan. As an assistant instructor, I was taught to “get in on students”, to make them feel pain. This was an important part of the indoctrination process, because it set the instructor up as the dominant and the student as the submissive.

Fear was an important tool in establishing control. Henry commits suicide by hanging himself within the school. A female student that I signed up and I remember thinking that she had psychological issues. At one point she told me that she thought instructors were reading her mind.  What she though was mind reading was observation followed by manipulation. Years after I left I heard the story that she tried to burn the school down and then hung herself. Seeing Henry hanging inside the school, I was overcome by emotion and had to look away. This is what happens when a cult takes over an already fragile mind and manipulates it. 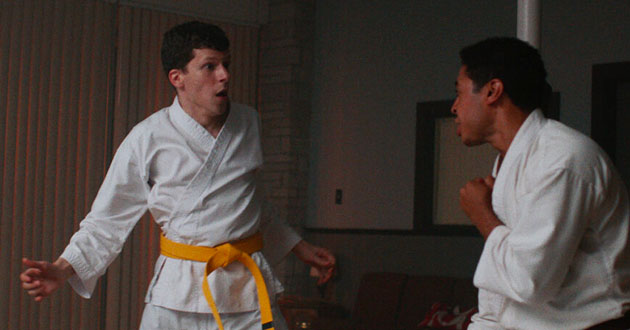 Casey walked into a local martial arts school like thousands of other people do.  He wanted to learn to defend himself.  There was no reason that suspect that it was a front for a cult.  Casey was taken down a twisted path of violence and control.   The groups will overtook his personal judgment silencing the voice in his mind telling him something was wrong. In the end, he becomes as bad as the gang that attacked him.   No matter if it’s a religious or a martial arts cult most people would never have joined if they knew agenda to manipulate them from the beginning.

Riley Stearns has created a ﬁlm that is based in reality.  A scenario that has played out in dojos across the world. This is a dark comedy and when the viewer goes to see it with the knowledge that this happens, the ﬁlm takes on an added level of reality. Stearns sets his story in what feels like the early-to-mid ’90s but never mentions the timeframe, only hints at it with some prominently placed VHS tapes. If offbeat is the goal, Stearns earns his black belt.

Russell Johnson is the writer and producer of Deceived Podcast.

Have you seen The Arts of Self Defense? Let us know what you think!

7 thoughts on “Guest Review: The Art of Self Defense – bears a striking resemblance to a real life martial arts cult”