You don’t have to be a Laurel and Hardy expert to appreciate Jon S. Baird’s latest movie Stan & Ollie. The Laurel and Hardy biopic (released in late 2018 to qualify for OSCAR contention) is currently out at the Landmark Edina Theater in the Minneapolis area and further expanding in the coming weeks. The “picture” stars Stan Laurel (played by Steve Coogan) and Oliver Hardy (played by John C. Reilly) as their careers have started to fade, and are being overshadowed by other acts i.e. Abbott and Costello, they embark on a music hall tour of the United Kingdom and Ireland in 1953.

We first get a glimpse of Laurel and Hardy when they are making the 1937 Hal Roach picture Way Out West. Hal Roach (played by Danny Huston) refuses to give a fair contract to Laurel while Hardy remains tied to the studio on a contract that the studio refuses to terminate, forcing Hardy to make “pictures” without Stan Laurel but rather with other actors/comedians. Laurel calls Roach a “parvenu” meaning a person who got rich off others and has no class. As Laurel tells Roach in the movie; “look it up in the dictionary, Hall. There’s a picture of you!” Oliver Hardy is made to shoot the “elephant” film Zenobia with another comedian and Stan Laurel signs a new contract with Fox Studios, but without Hardy’s signature, the contact becomes null and void and leaves Laurel feeling betrayed by Hardy. Their bitter feelings would linger for years.

When we next see Laurel and Hardy in 1953, they are back together but are struggling to shoot another film together. The promise of the new film – a comedic adaptation of the classic Robin Hood made by a director impossible to get on the phone or find in person – is what gets the comedic duo in contract with producer Bernard Delfont (played by Rufus Jones). But Delfont’s poor pre-publicity means that their tour begins in almost empty theaters, ones that surely weren’t meant for the likes of Laurel and Hardy. Bernard Delfont was preoccupied with the publicity of his up and coming star Norman Wisdom, which caused Laurel and Hardy to have to create their own publicity while on tour. They made serval public appearances, which included judging a beauty contest in the UK seaside resort of Worthing. It is at this public appearance that Hardy collapses from a heart attack and is forced into bed rest. 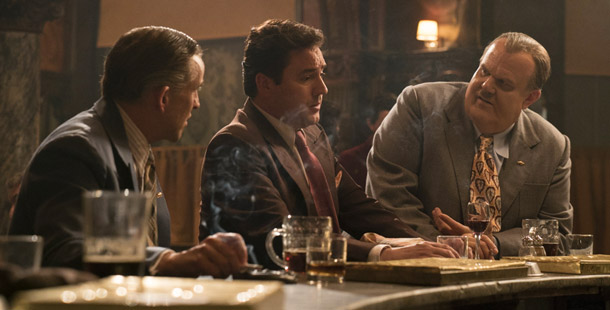 The duo, having recently been reunited with their respective wives, Ida (played by Nina Arianda) and Lucille (played by Shirley Henderson), are set back with Hardy’s bed rest and Laurel’s refusal to perform the act with any other comedian. With the exception of all of the Lauren and Hardy scenes, the movie’s scenes with Ida Laurel, Lucille Hardy and Bernard Delfont are some of the most comedic scenes, pitting Ida and Lucille against each other and then Ida against Delfont whom she refuses to sit next to during shows and has to remind; “no touching!”

With Ollie Hardy having gotten some much needed rest, he decides that he must do one last show with Stan Laurel and the duo, along with their wives and Delfont, set sail for Ireland. As they arrive at the Irish harbor, they are arrived to great cheers and thunderous applause. Their show in Ireland is completely is sold out and their show is met by great appreciation and hailed as a triumph. While their Robin Hood movie is not meant to be, Laurel continues working on its script, even after Hardy’s death in 1957. As the “picture” reminds us at during the end credits, Stan continued to write sketches for Laurel and Hardy past Hardy’s death and also during the last eight years of his life.

The movie, even though a comedy, is full of bittersweet moments. They never get their happy ending by making one last “picture” and their lukewarm personal relationship is enough for the movie to end on a sorrowing note. While the acting of both Steve Coogan and especially John C. Reilly is masterful, the “what could have been” movements at the end of their careers make the movie much more dramatic than comedic. Both actors deserve to be recognized for their acting, but if there was any justice, Reilly should’ve been nominated for best actor by The Academy. Overall, this was a delightful “picture” of two comedic superstars in the sunset of their careers, filled with brilliant performances by the two leading actors.

Have you seen STAN & OLLIE? Well, what did you think?