It’s been ages since Steven Soderbergh, though I gotta admit I wasn’t too impressed with his last film Side Effects. But still, glad he didn’t end up retiring after all, and he returns to do a heist action comedy, as Soderbergh himself described, Logan Lucky is an anti-glam version of an Ocean movie (per EW) and it’s definitely much smarter than it looks.

Channing Tatum and Adam Driver play brothers Jimmy & Clyde who attempt to pull off a heist during a NASCAR race in Charlotte, North Carolina. It did give me a pause for a moment considering what just happened in that town. In any case, they ended up enlisting an explosive expert aptly named Joe Bang (a hilarious Daniel Craig) to help with the plan. The film’s pacing could’ve been a bit more dynamic but fortunately it’s got enough going for it to keep my attention thanks to the actors’ performance. Watching these actors attempt Southern accent was a hoot, Craig was the most surprising as he’s a Brit but I thought Adam Driver’s accent was spot on and made me giggle every time.

The film offers plenty of laughs. There’s a pretty amusing cameo by Seth MacFarlane doing a spot on Cockney accent. But the funniest moments are during the heist itself, and I do think Craig has a career in comedy once his Bond stints are done. The heist faced some challenges along the way, but there’s a clever twist at the end that made you go ha!

I think the strength of the film is the likable characters. Unlike the handsome, well-dressed smarty-pants like the Oceans’ movies, the Logans and the Bangs siblings are simple folks. They’re essentially nice guys who have been dealt a bad hand at life. Jack Quaid and Brian Gleeson (yet another talented Irish actor from the Gleeson family!) as Joe Bang’s two brothers are pretty funny as well. Riley Keough (yep, Elvis’ granddaughter) is pretty decent as the sister of the Logan brothers, and cameos by Katie Holmes as Jimmy’s ex wife and Hilary Swank as a Federal Agent. There’s also a sweet father/daughter relationship between Jimmy and his daughter Sadie (Farrah Mackenzie). 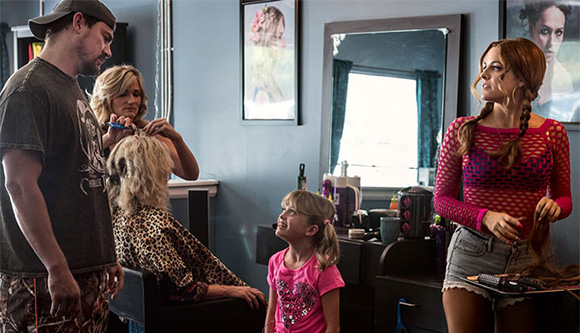 I just learned about Soderbergh’s unorthodox distribution deals for this film (made on a relatively low budget of $29 mil). Heh, that’s too bad Logan Lucky didn’t do well as I’d like more filmmakers getting creative control for their work. I hope more people would go and support this movie whilst it’s still in theatres. It’s a zany yet shrewd script by first time screenwriter Rebecca Blunt, who I hope would continue to get more work (that is if that isn’t just a pseudonym). It’s a pretty fun movie that never took itself too seriously, and I find it refreshing that it’s not mean-spirited nor foul-mouthed like so many comedies these days.

Did you see LOGAN LUCKY? Well, what did you think?