Luc Besson is not a filmmaker I would consider a favorite of mine. In fact, the last film I saw that he directed was The Messenger: The Story of Joan of Arc way back in 1999. Sure I’ve seen the films he produced and wrote such as the Transporter and Taken series, while I did enjoy some of those films, I would only consider them “guilty pleasures”. I was never fan of his cult favorite Leon: The Professional and I mildly enjoyed The Fifth Element. He’s now back with another big budget sci-fi adventure film that’s based on a supposedly popular French comic books; although I’ve never heard of these comics before. 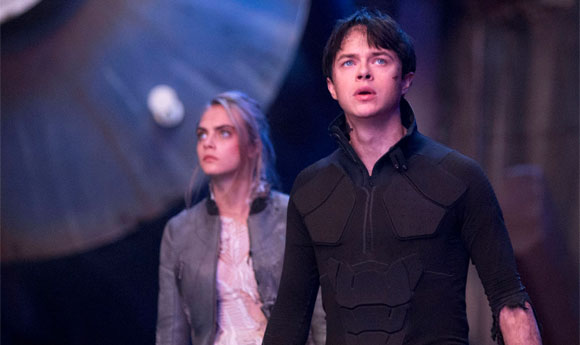 Set in the 28th century, the film opens with a group of alien beings who looks kind of like the Navis from Avatar and skinny human super models, enjoying their peaceful lives on a distant planet when suddenly space ships started clashing into their lands. Then we’re introduced to a couple of very young looking humans named Valerian (Dane DeHaan) and Laureline (Cara Delevingne). At first it looked like they’re on vacation at some remote beach but it turns out they’re special agents whose mission is to find something important and bring it back to their superiors. They met up with other agents on some planet and got in some trouble while trying to retrieve the product they were told to retrieve. Once they got what they needed, they headed to a planet that’s full of alien beings and humans living in harmony and the film spent most of its runtime on this city/planet.

If it sounds like I’m not sure what the film’s really about then you’re correct. The film has no coherent story or character development. It’s full of cool 3D effects and that’s pretty much it. Written and directed by Besson, I believe his only motivation was to make a very cool looking film and show off his 3D shooting skills. I love film that has great visual and 3D effects but I also want to see good story and interesting characters; this film contains neither. The film also lacks, of all things, good action scenes. In fact, I don’t recall any memorably action sequences at all.

I’ve never read the comic books but I assume the lead characters probably look quite different from the actors who portrayed them in the film. DeHaan and Delevingne both look like they’re 16 year olds and I find that hard to believe they’re some kind of special agents. Also, they have zero chemistry and their bantering throughout the film sounds forced. The supporting characters were also forgettable except Clive Owen, who happens to be the villain but he’s on the screen for only like 5 minutes, such a waste of his talent here.

I wanted to say something positive about this dreadful film but I couldn’t think of anything else besides the cool looking 3D effects. It’s one of the most excruciating films I’ve sat through. I would highly recommend you stay away from it.

So have you seen Valerian? Well, what did you think?