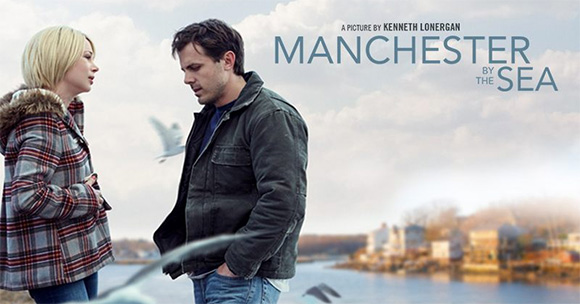 Cinema portrayals of angry people are not usually enjoyable entertainment yet we are fascinated by films that dwell entirely on simmering angst. Manchester by the Sea (2016) is such a film. Perplexing, unsettling, yet engaging, it is a story without joy that is made bearable by outstanding performances and superb cinematography.

The plotline has a simple core narrative framed by frequent and abrupt flashbacks that gradually piece together a jigsaw-like story. We meet Lee (Casey Affleck) as a handyman and depressive loner whose temper blows over at little provocation. Through a series of flashbacks, we learn that he lives in self-exile because of a horrible family tragedy he caused. He has become emotionally hollowed out and unable to relate to people. Suddenly his brother has a fatal heart attack and his will names Lee as executor and guardian of 16 year-old son Patrick (Lucas Hedges). But to accept this responsibility, Lee must move back to the idyllic seaside town of Manchester by the Sea which is full of traumatic memories, including of his attempted suicide, his divorced wife, and people who are wary of him. He stays for the funeral, drinks heavily, lashes out physically, argues with his teenage nephew, and wants to cut and run. Gradually, he becomes emotionally re-connected with family and place through the experience of caring for the typically full-of-himself nephew. Lee’s traumatic past makes way for new beginnings, new relationships, and the hope of redemption. 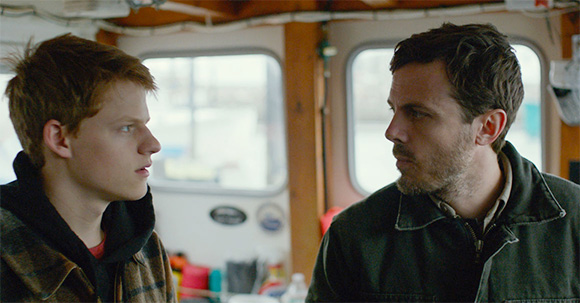 If you look for originality in storytelling, there is little of it here. Painful battles with inner demons is a cliché, and fighting several at once is simply a compound cliché not something new. Half of this film is spent on assembling the narrative jigsaw so we can understand what makes Lee the way he is, and the other half is spent on standard melodrama tropes about re-connecting by caring for someone else. However, it is the casting, characterisation, and cinematography that save this film from being just another story of angry people destabilised by tragedy. Casey Affleck does trauma and ambivalence very effectively. His bemused tolerance of his nephew’s demands and sexual exploits becomes the emotional scaffold that guides his calming from pot-boiling anger to resigned acceptance that life must go on. Lucas Hedges is the perfect foil for Casey Affleck, and both are helped by a strong support ensemble.

Brilliant acting by Affleck does not hide the film’s melodramatic predictability. But this slow essay on anger would be more unsettling were it not for its joyful filming. Trauma is calmed and un-likable characters forgiven when all are nestled against beautiful images of bobbing fishing vessels lapping the shores of charming Manchester by the Sea. The camerawork visually warms the film and helps bind its elements into an engaging story of loss and redemption.

Have you seen ‘Manchester By The Sea’? Well, what did you think?

Leave a Reply to Three Rows Back Cancel reply