The end of the year holiday season is always prime for finding movies kids can go to. After all, school’s out, and they need things to do to hold their attention. In my case, I needed to get them out of the house and a screening of an upcoming animated movie (courtesy of Flixchatter) would give my wife a couple hours of well-earned breathing time. My kids (7 and 9) are pretty picky about the movies we go to (my oldest held off seeing any of the Star Wars movies until after X-Mas) so I was a bit surprised after seeing the trailer that they were all-in.

Sing, directed by Garth Jennings (Hitchiker’s Guide to the Galaxy), brings us to a world inhabited by animals, namely a Koala: Buster Moon (Matthew McConaughey), an ambitious, if not overzealous theater owner working to keep his run-down theater afloat amid a string of failed shows and financial crisis. About to be evicted, he comes up with a plan to host a singing contest (a-la American Idol) with prize money of $1000. However, Buster’s aging and loveable Iguana assistant, Mrs. Crawley, mistypes the prize at $100,000. Animals from all over the city flock to Buster’s audition where we meet our main characters: Mike the mouse (Seth McFarlane), a devious but talented crooner; Ash (Scarlett Johansson), the punk rock porcupine; Rosalita the pig (Reese Witherspoon), a lovable domestic wife/closet singer; Johnny (Taron Egerton), a cockney accented Gorilla with the sweetest voice and finally Meena the elephant (Tori Kelly), a shy but talented singer with very low self-esteem. During and after the audition process, Buster hides the fact that the prize money isn’t what it seems and does whatever is necessary to keep the show going and revitalize his theater.

The most interesting part of Sing is when the story hones in on the contestant’s private lives. Rosalita with 25 piglets, Meena with her encouraging family, Mike’s run in with the underworld, Ash’s arrogant boyfriend and Johnny’s criminal dad add a bit of dimension to these otherwise one dimensional characters. As with most movies of this genre, it’s filled with pop culture music references, many of which went over my head but trivial in the scope of things.

The animation is tight and frenetic. The music is loud and bombastic. There is enough slapstick to elicit the laughs and giggles throughout. However there are some key dramatic moments involving Johnny and his relationship with his father and a little bit with Rosalita and Meena that resonated with my kids in a positive way. While my youngest was up from his seat dancing to the tunes and performances, my oldest cried a bit at the tender moments with Johnny and his dad. This was a good thing in my book. 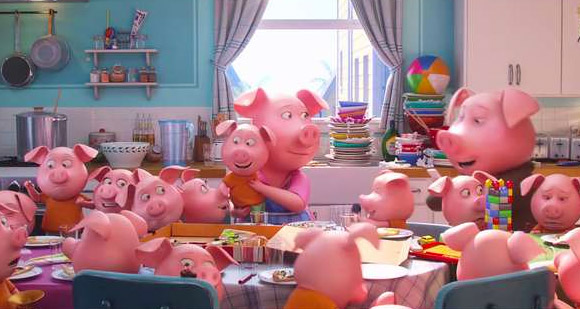 Finally, Sing avoids the predictable and loathsome culture of winning it all (American Idol, The Voice) to its credit. There are no Simon Cowells here which is a good decision on Illumination’s part. It’s really about finding your voice (literally and figuratively) and being true to yourself that really matters in the end. While that makes Sing as cheesy as it implies, it’s true – Sing is as light and cheesy as you would expect. But sometimes, with kid’s movies, that’s just what the doctor ordered.

So what do you think of SING? Let us know what you think!