I’m going to be honest: my expectations for this movie were not high. This mostly has to do with its predecessor, 2014’s Ouija (brought to you by Hasbro Studios: the same company responsible for next fall’s My Little Pony: The Movie – no, I’m not kidding). Not that Ouija was awful- it was just forgettable: another lukewarm “teenagers getting in over their heads with the supernatural” horror movie. I was also concerned that, because Ouija: Origin of Evil is a prequel to the 2014 film, I would know what to expect and therefore not find anything about it scary. However, after viewing it, I was pleasantly surprised (which I realize is a weird thing to say about a movie featuring the demonic possession of a child). It actually ended up being one my new favorite modern horror movies.

Ouija: Origin of Evil takes place fifty years before the first movie, in the house the original was set in, where recent widow Alice Zander (Elizabeth Reaser) holds fake séances, insisting she is not scamming her customers, but rather helping them find peace after losing loved ones. She is assisted by her two daughters: teenaged Paulina (Annalise Basso) and nine-year-old Doris (Lulu Wilson). Alice purchases a Ouija board to add to her act, and, while testing it out, unwittingly causes Doris to become susceptible to the house’s malevolent spirits and quickly possessed by one named Marcus (played by human chameleon and Guillermo del Toro darling Doug Jones). Alice and Paulina join forces with Father Tom (Henry Thomas), the head of the girls’ parochial school, to free Doris from the spirit’s clutches and rid the house of an evil that has resided there longer than the family has. 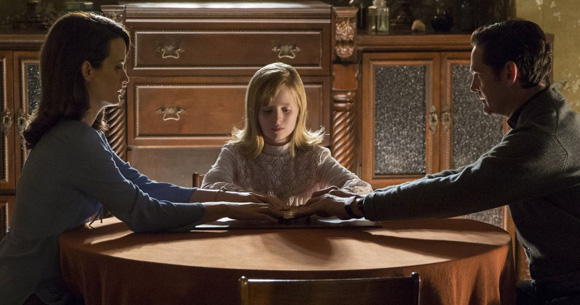 One of the movie’s greatest strengths was that it featured a mother and her daughters rather than a handful of one-dimensional high schoolers. The family focus made the stakes feel higher and the consequences more heartbreaking, especially thanks to the chemistry between the actresses. The movie was also well-paced enough to establish a strong relationship between the characters and give them dimension early on. My one gripe on this subject is that Doris isn’t quite as well-developed as her mother and sister; perhaps it’s because she’s possessed during the majority of the movie and isn’t herself, but getting a better idea of what she was like as a normal little girl could have made the change we see in her after the possession more unsettling (think Reagan in The Exorcist). Overall, though, the family was well-written enough for the audience to actually care about their fate- not an easy feat for a movie genre that often skips character development in favor of jumping straight into the scares.

And man, were there plenty of scares in this movie. As I mentioned earlier, the first movie was pretty forgettable; there might have been a couple moments that made me jump, but I couldn’t give you any specifics, and I only watched it less than two weeks ago. The prequel, however, had plenty of memorable moments- moments that had me whispering “NOPE NOPE NOPE NOPE” and clutching my armrests in terror. Doris’s CGI’d, gape-mouthed face featured in the promotional material is truly chilling, and, surprisingly, isn’t any less eerie the more you see it. Even the more predictable parts were unnerving, just because they were built up so well. The writer and director, Mike Flanagan, is hardly a horror movie novice, and his experience in creating suspense and atmosphere shines here. 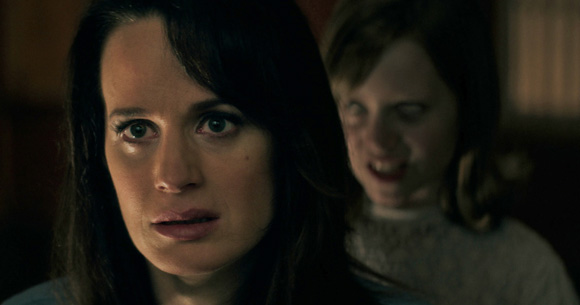 As of my writing this, Ouija: Origin of Evil has an 84% rating on Rotten Tomatoes. It’s an impressive score for a horror movie, especially for a follow-up to such an underwhelming one, and it’s well-earned. Who would have expected the studio responsible for bringing us the Jem and the Holograms movie was capable of producing something genuinely scary? I would highly recommend anyone who enjoys horror check this out.

Laura Schaubschlager is a Winona State University graduate with a B.A. in English, which is seldom put to use in my health insurance career (outside of cringing at the grammatical errors my superiors make in their emails). I’m an avid horror fan (movies, novels, video games- anything that makes me hesitate when I go to turn off the light at night), and I’m always looking for writing opportunities, although my current portfolio is made up of partially-completed short stories and an occasionally-updated blog: schaublahblah.wordpress.com.

Have you seen ‘Ouija: Origin Of Evil’? Well, what did you think?