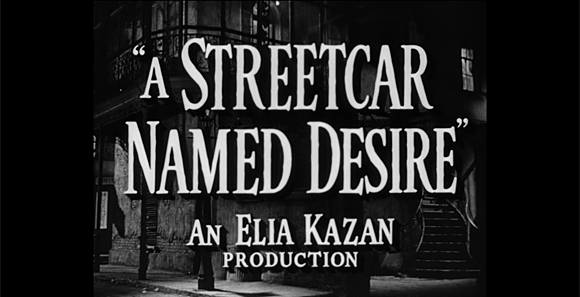 It’s been ages since I wanted to see A Streetcar Named Desire, not sure why I’ve put it off. I feel like I have watched it as one day I actually watched a bunch of clips from this film on youtube. There’s of course the famous scene where Brando yelled ‘Stellaaaaaaa…!’ that’s been parodied many times over, but I definitely need to see it to understand the significance of this steamy Southern classic.

Based on a hit play by Tennessee Williams, it’s one of those rare films that happen to be directed by the same person who did the original Broadway production, Elia Kazan. It’s interesting to see Vivien Leigh as yet another Southern belle, as I’ve only seen her in Gone With The Wind (1939), but really, the appeal of this film for me is Marlon Brando, whose brutish performance is the quintessential sexy bad boy.

As with any of my blindspot reviews, there are definitely spoilers so if you haven’t seen the film yet, proceed with caution.

Well, what can I say… my first impression had more to do with Marlon Brando. Can you blame me? I mean look. at. him.

From the first moment he came on to the screen when he saw his sister in-law Blanche at his house, Brando’s definitely got a magnetic presence like nobody’s business.

…
The trivia section of this movie on IMDb is filled with interesting tidbits. So apparently fitted t-shirts could not be bought at the time, so Brando’s apparel had to be washed several times and then the back stitched up, to appear tightly over the actor’s chest.

Err, what was I talking about again?

Ok so obviously there’s SO much more to the movie than Brando’s immense sex appeal, though obviously this role cemented his sex-symbol status.

A classic story adapted beautifully on the big screen

I could see why there are still countless stage adaptations of Williams’ classic story all over the world. Even though time has changed and to a certain degree, gender roles and social norms have evolved, the very core of the human condition still remains. Stories that deals with obsession, distorted reality, fears of aging, etc. are still relevant today and will always remain so. The film version underwent a major change in terms of the homosexuality of Blanche’s late husband, due to the Production Code demands that the film toned it down. The same with the depiction of rape, though it’s implied that Stanley did rape Blanche with the scene of smashed mirror and a firehose spurting onto the street. 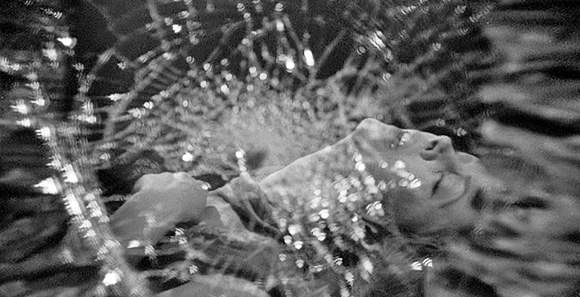 It was a clever way Kazan dealt with the strict Code, and also when Stella was in bed the morning after Stanley hit her. She had a big, gleeful grin on her face that indicated they had um, a very satisfying make-up sex.

Kazan’s big screen adaptation not only look beautiful in black and white, but it has an atmospheric and moody feel to it. I read that he worked closely with the production designer to create the authentically sordid look and literally had the walls around Brando and Leigh closed in on them during filming to create a claustrophobic tension within the space. Well that worked because that constricted feeling practically ricochets off the screen and into my living room!

Blanche and Stanley are such an interesting pair to watch on screen because there’s all this nervous energy around them. They’re attracted as well as repulsed by each other at the same time, at times they couldn’t even reconcile the two, which creates such interesting dynamic.

…
Kazan doesn’t immediately expose that Blanche’s dark past and the fact that she’s got mental issues, but it’s more of a steady buildup that escalates to the boiling point. The more her brutish brother in-law relentlessly torments her, the more she goes off the rails.

I’m constantly torn in how I feel for the characters as well, which is what a good movie should. A good character is not simple, one-dimensional and how we feel about a character could (and perhaps should) change as the movie progresses. Well, I initially feels sorry for Blanche but also exasperated by her, even if she couldn’t control it. As with Stanley, what starts out as a carnal attraction to this brooding, hunky man (as any full-blooded woman would) quickly changes to disgust and repulsion. I literally want to strangle him many times as I watch the movie, especially his treatment of his pregnant wife! 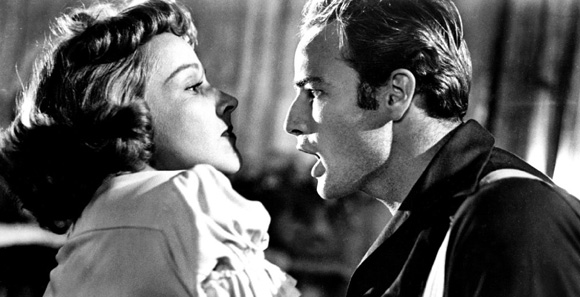 Performance wise, the film definitely belonged to Leigh and Brando. The British actress played yet another American Southern belle but in a completely different role. Leigh definitely got to display her vulnerability even more, especially towards the end when Blanche’s gone completely mental. It’s interesting that she had played the character in the London production under her husband Laurence Olivier’s direction. Per IMDb, she later said that Olivier’s direction of that production influenced her performance in the film more than Elia Kazan’s in this film.

Brando has had many memorable roles in his illustrious career, but no doubt this is one of the earlier ones he’s most remembered for. His intensity is second to none, there’s few actors who are as explosive on screen in terms of presence and charisma as Brando.

Kim Hunter was pretty memorable as Stella, but I think every cast member was practically outshone by the two leads. So was Karl Malden as Blanche’s potential suitor. I think both were believable in the roles, it just didn’t leave a lasting impression to me. I guess it has less to do with their performances, but more about the strength of the two leads. I wish Brando had won Best Actor as well, but then again I hadn’t seen the other male performers of that year.

Does it live up to the hype?

The film won four Oscars out of twelve nominations and also rank #47 in AFI Top 100 Films. Elia Kazan was certainly one of those stellar directors who have won acclaimed in film AND on broadway, winning multiple Oscars as well as Tony awards. I’m always astonished when a story could work as well on stage as on screen.

I have never seen the stage adaptation, but my impression of the film was that it was sexy, gritty, but deeply unsettling to the point that by the end I was just quite revolted by the whole thing. None of the characters are likable except for Stella, Blanche DuBois’ devoted younger sister. I think that was the point though. This wasn’t going to be a cheerful movie with a happy ending and there’s also very little humor to give you relief from all that tension.

I’m glad I’ve finally watched this film from start to finish. It’s one that won’t easily escape from one’s memory. I have to say though, compared to other classics like say, Casablanca or Gone With the Wind or Roman Holiday, I’m not sure this is something I’m keen on watching again. It’s just not a pleasant film overall, and I don’t find it to be an emotionally-gratifying film either as it’s hard to care for any of the characters. That said, it’s definitely essential viewing for cinephiles. The story is such an intriguing character study that is chock full of riveting-but-inherently-imperfect relationships.

The film ending is apparently different from the stage version. In the film, Stella no longer trusts her husband and she took her baby and leaves. We hear Stanley yelling ‘Stellaaaa….’ again as he did in the most famous scene in the film. I read that in the stage version, Stella chooses to be with Stanley as her sister is escorted to a mental institution. I’m not sure which version I prefer, I think it’s riskier to have an ending that isn’t tied neatly with a big red bow, though not necessarily better.

Regardless of the different ending, there are certainly plenty of thought provoking themes to grapple with. Delusion, denial, forbidden passion, and tragic irony… Williams’ timeless play has all the ingredients for an engrossing story, and Elia Kazan certainly had what it takes to do it justice… both on stage AND on screen.

Check out my full 2016 lineup by clicking the graphic below

Have you seen A Streetcar Named Desire? I’d love to hear what you think!