It’s almost Monday again… my goodness, where has the weekend gone? It’s been really quite a whirlwind for me. I had a movie night with my two girlfriends Friday night where we watched Suite Française (well, a rewatch for me), and between Saturday & Sunday I saw three MSPIFF movies. I managed to fit in a 14-minute immigration short film called ELLIS (with Robert De Niro) and re-watched Bride & Prejudice on Saturday night too as we opted to stay in after a long day.

There’s a bit of a snafu on Sunday afternoon but I only have myself to blame. I didn’t read the ticket properly so I went to the wrong theater to see this Estonian drama The Fencer! The majority of the films are played at St. Anthony Main Theater by the river, but some of them are at Uptown Theater. Well, thankfully there’s still some tickets available to Mr. Pig, which I had missed on Friday night.

Well, here are mini reviews of three of the films I saw this weekend:

My Internship in Canada

This is a political comedy set in Northern Quebec where an idealistic Haitian grad named Sovereign applied to be an intern of Guibourd, an independent Member of Parliament (MP). This French-Canadian movie chronicles their adventure navigating Canadian politics as Guibourd finds himself in the awkward position of holding the decisive vote to determine if Canada will go to war.

I find this movie so delightful and funny from start to finish. I don’t understand much about Canadian politics but it hardly matters. It’s more about the relationship between this MP and his intern, as well as his wife and daughter who have VERY different political views. Patrick Huard as Gibourd and Irdens Exantus (in his debut acting role) as Sovereign are so fun to watch, they have such different personalities but yet they share such an endearing chemistry. The movie is part road trip as well, as Gibourd has a fear of flying phobia so they practically had drive hundreds of miles everywhere. There are some amusing scenes involving the Indian tribes and the truck drivers who constantly block the roads, as well as some hilarious scenes of Guibourd’s past as a hockey star. Philippe Falardeau, the director of the Oscar-nominated Monsieur Lazhar, wrote and directed this political satire. Definitely worth a watch and being this is the first MSPIFF movie I saw, the film festival was off to a good start!

This is NOT to be confused with the Kevin Costner movie from 2012. This is a Minnesota-made, female-led independent film set in the Twin Cities. (read my interview with the creators)

The film centers on struggling artist Anna Larsen who returns to her hometown Minneapolis to help care for her ailing mom. She didn’t have the best relationship with her mom, who never understood her. It’s palpable from the first moment they were in the same room together after years being apart that they did not get along. Anna came from a divorced family and so she dragged years of family baggage along with her as she comes home from Chicago.

When she found a mailbox from her childhood, she embarked on a quest to solve the mystery of its owner. Along the way she had to confront certain things about her past that she thought she had buried behind her, including the boy next door she grew up with. But the core of the story is a mother/daughter relationship getting over their stormy past, as well Anna also facing her own demons. 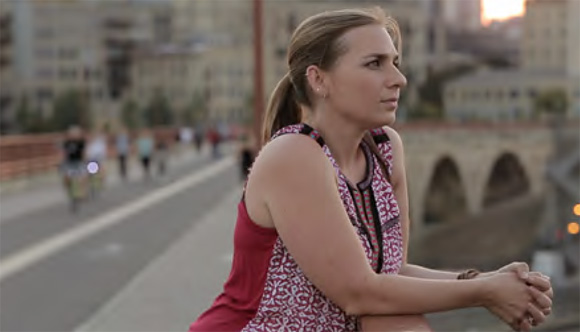 I immediately connect with the protagonist of the story, played in such natural grace & humor by Cara Greene Epstein. Though I don’t necessarily share her family journey, I can relate to her pain and struggles in reconciling what’s real and what she’s been imagining (and hoping) for her life. There’s a scene at the art gallery (the location of my set visit) that was quite heartbreaking to watch.

The fact that the creators of Dragonfly, co-directors Maribeth Romslo & Cara herself, are both mothers and daughters themselves, they strived to portray authentic relationships on screen and I think they did just that. The relationship between Anna and her brother also comes across very genuine, I guess it helps that Anna’s brother’s played by Cara’s real-life brother David Greene.

The film is beautifully-shot and is simply gorgeous to look at. I also love the use of music in this movie, featuring talented local artists such as John Hermanson, Cloud Cult, The Ericksons, etc. At 76 minutes, this is a lovely little drama that never overstays its welcome.

What I love about attending film festivals is, aside from seeing a bunch of indie gems, I also learn about certain filmmakers I wasn’t familiar with. Now, I knew Mexican filmmaker Diego Luna as an actor (i.e. The Terminal, Elysium) but I didn’t realize he’s also a director. Mr. Pig is Luna’s second feature film, featuring Danny Glover and Maya Rudolph as father and daughter. I think he’s pretty talented behind the camera as well.

Glover plays Ambrose Eubanks, a down-on-his-luck hog farmer who has nearly lost everything. We first saw him at his extremely messy house and he’s just about to drive to Mexico to transport his last possession, a giant pig with a pedigree named Howard (Howie) that’s worth a lot of money. But things don’t go according to plan, and the last half of the film becomes a reunion of sort (which began reluctantly at first), as his daughter Eunice ended up traveling with him.

The movie started out with Ambrose’s close relationship with his pet hog, but essentially the story is a love letter to our parents… with a pig in the middle. That’s the director’s note on the MSPIFF page, which I hadn’t read until after I saw the film. I have to say I didn’t always enjoy watching this movie, it was rather slow and I really didn’t know where it was going (perhaps a metaphor for Ambrose’s life, but it just wasn’t pleasant to watch). But once Maya Rudolph entered the picture, things started to pick up and the film also grew brighter visually as a result. The final third of the movie, as the three are en route to an idyllic beach in the Mexican Pacific was beautiful to look at. It’s such a contrast to the messy and rather disgusting look of the first part with the pig pens and Howie being sick on a motel bed, etc.

The story is quite predictable as well, but I was still invested in it thanks to Glover and Rudolph’s solid performances, especially the latter who’s immensely likable. This is the first time I saw Rudolph in a non-comedic role and she’s terrific. Her comic timing is effortless, but so is her dramatic chops. She definitely injects life into the film with her presence.

So that’s my weekend roundup folks. What did you see this weekend, anything good?