Maria Altmann, an octogenarian Jewish refugee, takes on the Austrian government to recover artwork she believes rightfully belongs to her family.

Let me start by saying that Dame Helen Mirren is one of my favorite actresses I’d watch in practically anything. She’s easily one of the best things of any film, including this one.

As a woman whose torn apart from her family in Vienna, Maria Altmann is given the chance to take back what’s rightfully hers, but she must also face her dark past in the process. Woman in Gold has a historical significance, but what drew me to the story is the personal connection.

Following her sister’s funeral, Maria discovered letters dating back to the 40s that prompted her to reclaim her family’s artwork. She enlisted help from an inexperienced lawyer who happened to be the son of a friend, Randol ‘Randy’ Schoenberg (Ryan Reynolds). I have to admit I’m not enthused on Reynolds’ casting and in the end, his performance confirmed my dread.

The film utilizes several flashback sequences of Maria’s once-blissful life with her affluent family. It’s a close-knit Jewish family but she’s her aunt Adele’s favorite (Antje Traue), who was the subject of famed Austrian painter Gustav Klimt. The Portrait of Adele Bloch-Bauer I (also called The Woman in Gold, hence the title) is practically the Mona Lisa of Austria. Though the monetary value is clearly substantial, the personal value is what’s priceless to Maria. I find myself more drawn to the flashback scenes, I was quite impressed by Orphan Black’s Tatiana Maslany as the young Maria. That goodbye scene with her parents was such a tearjerker. 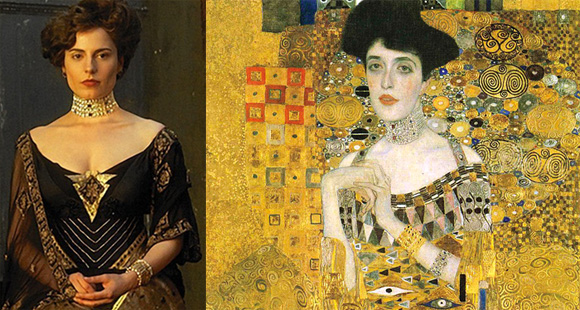 In fact, it felt like a different film entirely as the tone is far more serious and emotional. In fact, the scenes where Maria and her then husband Fritz (Max Irons) were chased by the Nazi officers was pretty intense. In contrast to the contemporary scenes in both L.A. and Vienna, the tone is rather whimsical and at times it didn’t seem to have the gravitas the story deserves. Now, I don’t blame Reynolds entirely, as it’s more of a writing and directing issue, but his casting doesn’t help. He’s fine when the role requires him to be whimsical, but I find him entirely unconvincing in the emotional scenes. I just don’t think he’s got dramatic chops, though I suppose I should give him props for trying. It’s quite infuriating to see a perfectly capable actor like Daniel Brühl [as the Austrian journalist who helped Maria’s cause] not given much to do. 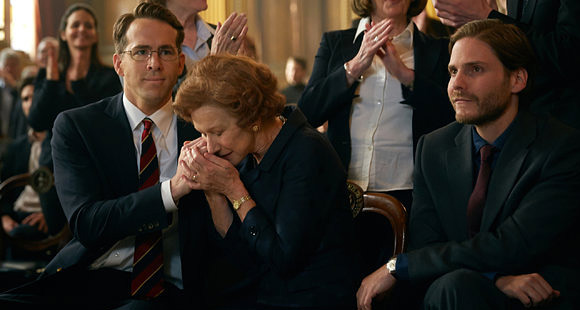 Overall I enjoyed this film, there are some emotional as well as fun moments sprinkled throughout. Yet, whenever the film hit a particularly poignant note, the next scene strikes an entirely different note that it seems rather jarring. I understand that perhaps director Simon Curtis injected humor to make the film less heavy-handed, but the movie became so uneven in the process.

That said, if you’re intrigued by the story, this is certainly worth a rent. It’s not exactly a work of art by any means, but I definitely like it more than Monuments Men. Of course having Helen Mirren in the lead makes the film all the more fascinating. I’d still recommend this one if you like historical dramas, I find the flashback scenes in Austria to be especially compelling.

Have you seen Woman in Gold? What did you think?