Liam Neeson has struck gold with TAKEN and he’s been doing the same kind of movie since. It could be that he’s now being typecast or that he prefers the big paychecks; I’m thinking it’s a little bit of both. Whatever the case, he’s great as the action hero who can take down countless baddies and he would’ve been perfect as Jack Reacher. For many action stars in Hollywood, we kind of have to suspense of belief that they can beat down a bunch of bad guys, I don’t see Tom Cruise, Brad Pitt or Matt Damon take down anyone in real life. But Neeson I can believe he can kick ass on the big screen and in real life.

The film opens with a wounded Jimmy Conlon (Neeson), he’s been shot and then the film flashes back 16 hours earlier. Conlon is now at some bar in NYC and asking the bar owner Danny Maguire (Boyd Holbrook) for a loan. Danny is the son of a powerful Irish mobster Shawn Maguire (Ed Harris). We later learned that Conlon and Maguire are childhood friends and that Conlon is his hit man. Conlon also has a son named Mike (Joel Kinnaman) who doesn’t want to have anything to do with him because of his involvement with the mob. Mike is a limo driver and on this night happens to be driving Danny’s drug dealing partners; he drops them off at Danny’s condo and waited outside. Danny owes his partners a lot of money and since he can’t pay them back, he decided to kill them. Mike witnessed the carnage and barely escaped when Danny went after him. If you’ve seen the trailer then you pretty much know the basic story set up, Jimmy came to his son rescue and killed Danny. This of course pissed of his old friend Shawn so he sends out his henchmen, including dirty cops, to take out Jimmy and his son. True to the title, both of them ran all night.

Unlike his role as Bryan Mills in Taken, Neeson is more of a loser in this film. But he’s still kick a lot of butts and shoots tons of people. Basically he’s a poor man’s version of Bryan Mills. Harris took his role a bit too seriously but he’s effective as the villain. I’m still not sure I like Joel Kinnaman, he’s okay in last year’s Robocop remake and he’s okay here as the sidekick. There aren’t any other memorably performances in the film, although rapper Common showing up as the main antagonist was kind of weird and interesting. Also, there’s a nice cameo from a veteran actor whom I haven’t seen on the big screen for a long time, so keep an eye out for him.

The script by Brad Ingelby is pretty generic, there’s nothing that we haven’t seen in this kind of film before. In fact I think he must’ve watched some early 90s crime thrillers before he wrote this script, the film reminded me of State of Grace, Out for Justice and Heat. There’s even a scene where the two veteran actors Neeson and Harris facing one another in a restaurant just like the scene from Heat with De Niro and Pacino. Director Jaume Collet-Serra (who worked with Neeson previously in Unknown and Non-Stop) did a good job of keeping the action moving fast and never lingered on useless scenes. He used some interesting transitions between each scenes, not sure if I’m a fan of the technique but it’s definitely interesting. He didn’t really include any over-the-top action sequences, but I did enjoy an action sequence set in the housing project. He also shot the movie on film, a rarity these days and I think it looks great. 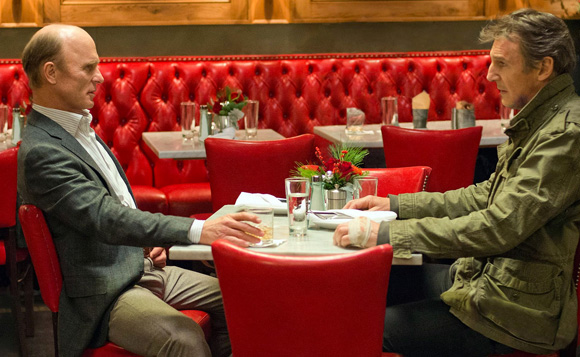 This isn’t a film that’s going to win any awards and don’t expect any originality. If you like seeing Liam Neeson kicking ass then you’ll enjoy this one. It reminded me of the 90s action thrillers and most importantly, I was never bored while watching it.

Have you seen Run All Night? Well, what did you think?