Happy Monday everybody! Soooo… how many of you stayed up late to watch the Oscars last night? Well I live tweeted for the most part, I find that it’s easier than doing a live blog. As the Oscar attendees got ready this Sunday, I went to brunch, gym, prepared dinner and went downstairs to my entertainment room an hour before the ceremony started.

The way to watch the #Oscars is sitting comfy on my couch in my PJs. Oh and with my MacBook on my lap of course 🙂

These are the 14 I predicted, which I got all correct except one for Best Documentary:

Favorite Winners of the Night

These are my two favorites:

I REALLY love how she wore this unabashedly sparkly feminine dress with such panache. I LOVE her dress simply because of the way she wears it. 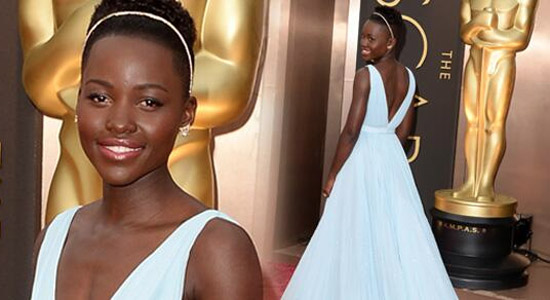 I LOVE how Lupita Nyong’O handles color. She has been making one amazing dress choice after another. I’m not super crazy about the shape of this pale blue dress, but she carried it off so well. And that bandeau made her look like Cinderella at the ball! She’s just too cute for words.

I quite like the rest of the acting nominees (sorry, not crazy for Meryl Streep or June Squibb‘s dress to be honest)

Dapper men on the red carpet!

Before the ceremony even begun though, Benedict Cumberbatch already WON Oscars 2014 with THIS awesome photobomb:

“I love you mom …Thanks for helping me to dream.” — Jared Leto, acknowledging his mom and brother in his acceptance speech. VERY cool that he showed love for his family.

“No matter where you come from, your dream is valid.” — Lupita Nyong’O. No matter how , acknowledging his mom and brother in his acceptance speech. VERY cool that he showed love for his family.

“Films with women at the helm are not a “niche”, but do, in fact, make money.”  – Cate Blanchett, championing women in film in her defiant acceptance speech. Yes, you go girl!!

There’s no vid of the actual acceptance speech, but this is a clip of her in the Winners Room:

Matthew McConaughey‘s speech was rather odd at times, but I’m glad he thanked God, which is apparently a rare thing at the Oscars according to this website. He said he needed three things to survive: God, family and someone to look up to as a hero.

“First off, I’d like to thank God, because that’s who I look up to. He’s graced my life with opportunities that I know are not of my hand or any other human hand … [He has shown me that it’s a scientific fact that gratitude reciprocates. In the words of the late (British actor) Charlie Laughton, who said, ‘When you got God you got a friend and that friend is you.”

He got no applause for that, which I’m not surprised at all, this is Hollywood after all. In any case, it turns out that hero is himself 10 years down the line…  “My hero’s always 10 years away … I’m never going to attain that. That keeps me with somebody to keep on chasing.” He also thanked his wife, children, mother and his gumbo-loving late father. And hey, he didn’t leave out his signature ‘awright, awright, awright.’ Classic!

My all time fave speech of the night is Alfonso Cuarón‘s all the way. He’s just so humble but hilarious:
“For many of us making this film was a transformative experience … For a lot of people that transformation was wisdom. For me it was just the colour of my hair.” But the funniest bit was when he thanked the *wise guys* at Warner Bros, before quickly correcting himself with saying ‘wise men’ Mwahahaha!!

So how did Ellen do as host? 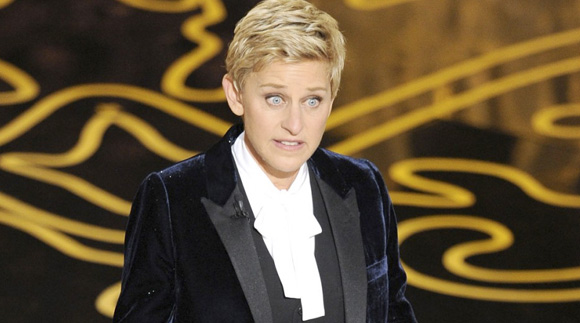 Well I happen to enjoy her hosting duties. I thought she was hilarious but not mean-spirited. Hope she’ll be back next year.

She started off by making fun of the L.A. weather “It has been a tough couple of days for us here. It’s been raining.” Ahah yeah, we barely made it ABOVE zero here where I live.

Here are some of my favorite jokes:

“I’m not going to say who looks the most beautiful, but it’s clear. It’s Jared Leto. I mean, he’s the prettiest. Boy is he pretty. Nominated for best supporting actor, and Matthew McConaughey also pretty by the way but a different, like a rugged, dirty, a dirty pretty, like a rugged dirty pretty. Good dirty, not bad dirty. Both nominated for Dallas Buyers Club, a very important movie. It deals with the serious issue of people who have sex at rodeos. Don’t do it.”

“A little background on Bruce [Dern]. His grandfather was the governor of Utah, his great uncle was a Pulitzer Prize-winning poet, and his Godmother was Eleanor Roosevelt. And here you are among us tonight. What went wrong?”

“One of the nominees is Her and by Her, I mean Meryl Streep.”

The whole Pizza bit was hilarious!! So ok the show went a bit longer but THIS was fun and I don’t mind it one bit. I mean, between the A-list selfie that broke Twitter, ordering pizza and collecting money in a hat, it feels like the *people’s Oscar* this year, more casual and goofy than usual. 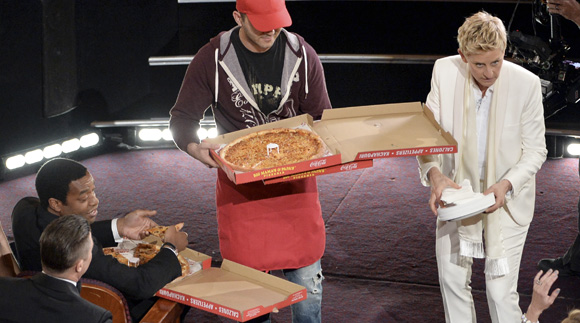 “I don’t have any money. Sandy [Sandra Bullock] you have money. You got a lot of money. Where is Harvey Weinstein? Harvey? “ Mwahahahaha!

Later on, after most of the pizza were consumed, she continued on the joke about paying for them!
“So I borrowed Pharrell’s hat, and I thought I’d pass it around and get some money for the pizza.” *She then proceeded to get money from the likes of Kevin Spacey and Brad Pitt, she basically cajoled Brad Pitt to give her more than the $20 bucks he initially threw in the hat. When it came to Lupita Nyong’o, she opened her tiny purse and gave her a lip gloss instead. Ellen threw it in her pocket saying, ‘It’s your lip gloss? Ok now that’s gonna be worth something.”
///

So how did I do on my predictions?

Well, I did better than last year as I got 13 out of 14 predictions right. But really, this year has been quite predictable. I think the only TRULY nail-biting major categories were Best Supporting Actress, but I think Lupita Nyong’O has been gaining a lot of traction this award season.

American Hustle got ZERO awards despite a whopping 10 nominations! WOW, talk about a complete shutout. According to this TIME article, Only two films have ever received worse snubs: 1977′s The Turning Point and 1985′s The Color Purple, which were each nominated for 11 awards, but didn’t win a thing. Other films that share the dubious distinction of receiving 10 nominations with no wins are 2002′s Gangs of New York and 2010′s True Grit. Ouch.

Now, even though I was pulling for Gravity to win Best Picture, I’m not terribly disappointed that 12 Years of Slave won. It’s cute seeing the usually solemn director Steve McQueen leaped on stage as he was cheered by his cast and crew!

Bette Midler singing Wing Beneath My Wings. I don’t hate the song, but I REALLY didn’t like her singing it tonight, especially after such a beautiful theme of Somewhere In Time of In Memoriam. Same with Idina Menzel‘s live rendition of Let It Go. I personally prefer the First Time in Forever song anyway, but Menzel’s singing was so pitchy and she looked like she was struggling with the song that it was cringe-worthy! Glad that it won Best Song though.

Seeing this pic of Philip Seymour Hoffman… still can’t believe he’s gone 😦 I appreciate The Academy showing his photo last and the longest though, but still, that can’t bring him back … 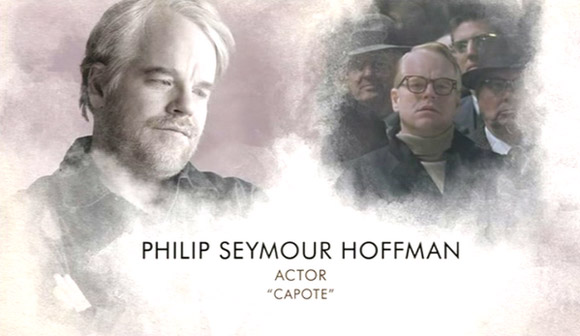 So did you watch the Oscars last night? Thoughts on the winners and what’s your pick of best/worst moments?