The original version of RoboCop holds a special place in my heart, not only it’s one of the best films of the 80s, it actually converted me to become a hard core shoot’em up action fanatic. Being that I was born in the Far East, I grew up watching martial arts films, lots and lots of kung fu and samurai flicks. But when I first saw 1987’s RoboCop, I was hooked and the action/adventure is my favorite genre in films. Back in the mid 2000s MGM announced they were going to do remake of Verhoeven’s classic and of course I was not happy to hear that. But around 2006 or so, they announced that Darren Aronofsky was attached to write and direct the remake, since I’m a fan of the director I was intrigued. Unfortunately MGM ran into some money issues in late 2000s and Aronofsky left the project. A few years later, they found a new director and now the movie is ready for prime time.

This new movie starts out with a newscaster Pat Novak (Samuel L. Jackson) giving news to the US citizens about how the robots are controlling the streets of a country in the Middle East and that they’re doing a great job of securing the dangerous neighborhoods. Then he starts lecturing about why the US government are so robophobic, you’ve probably seen that clip countless times from the TV spots and trailers. We learned that these robots belongs to a giant corporate called OmniCorp (OCP) and that they’re looking for ways to put the robots on the streets of the US so they can make even more money. 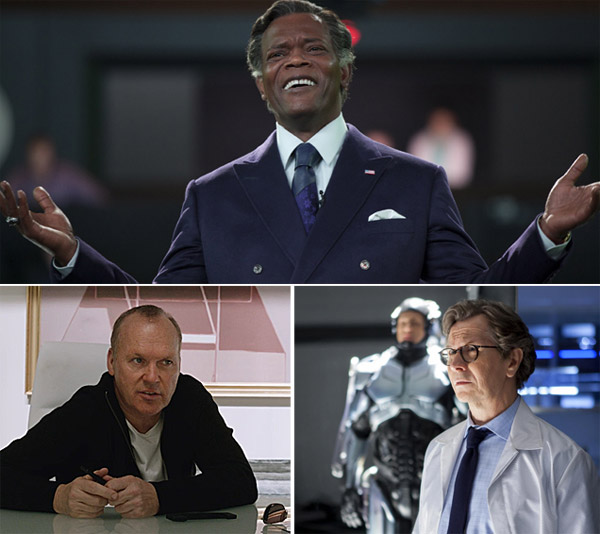 The problem they’re facing is that most of the US politicians aren’t comfortable having emotionless robots doing police work, so OCP’s CEO Raymond Sellars (Michael Keaton) came up with a plan to have an actual human being inside the machine. He convinced his main scientist Dr. Dennett Norton (Gary Oldman) to go along and they start searching for a candidate to become this new RoboCop. They’re hoping that with a human inside the robot suit, the politicians will change their minds and vote to legalize robots roaming the streets of US everywhere. Around this time we were introduced to a Detriot police detective Alex Murphy (Joel Kinnaman), he and his partner Jack Lewis (Michael Williams) were ambush during a sting and Lewis ended up in the hospital. Both of them were trying to bring down a crime lord but without the permission of their boss Chief Karen Dean (Marianne Jean-Baptiste). Murphy also accuses some of his fellow detectives of being dirty but since he doesn’t have any evidence, his boss told him to leave the case. The bad guys was able to put a bomb beneath Murphy’s car and later when he got home, the car’s alarm went off and when he tried to turn it off, the car blew and Murphy was hurt quite badly. OCP finally found their candidate and if you’ve seen the original film then you know that Murphy’s now a RoboCop and the adventure begins. 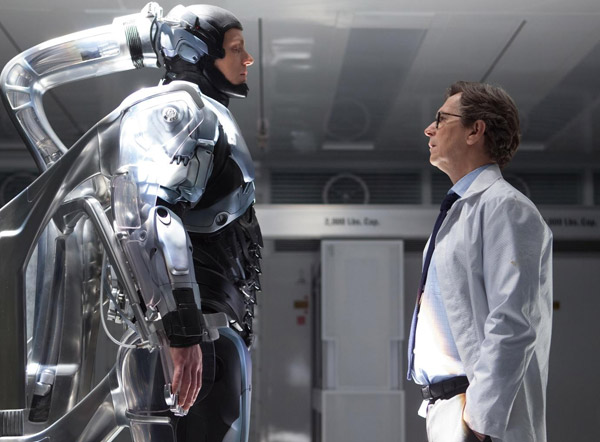 After seeing the awful remake of Total Recall, I didn’t have much expectations for this movie. But to my surprise, I quite enjoyed it. Instead of just reshooting the scenes of the original, they actually brought in some new ideas for the remake. Where the original film dealt mostly with the corporate greed of the 80s, this one tried to say something about the current US military and of course the corporate world, I don’t think they quite succeed at that they’re trying to say but it’s interesting never the less. This is the first movie I’ve seen from Brazilian director José Padilha and I thought he did a pretty good job, but I do wish he’d hold the camera still once in a while. He’s one these young directors who thinks that by having camera moving constantly, even during dialog scenes, would make the scenes more interesting or something. But at least he didn’t shake the cameras too much during the action scenes.

Again I did like some of what screenwriter Joshua Zetumer came up with for the remake, he was trying to please the fans of the original and also trying to bring in the new generation of fans. Unfortunately the script sort of loss its focus down the stretch, I loved everything that happened in the first 40 minutes or so of the story but I wish he stuck with the ideas he came up with. The climatic showdown between our hero and the villains kind of felt forced and just didn’t work for me. If this one turns out to be a hit, I hope they can expand the ideas for the sequel. 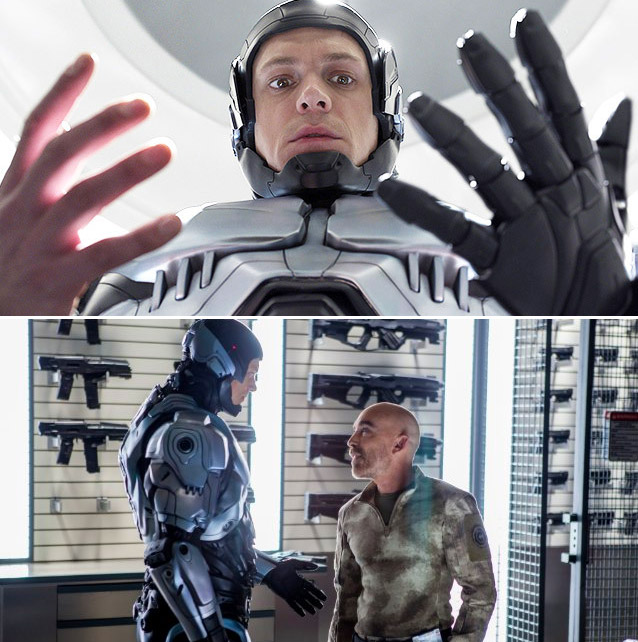 Performances wise, I thought all of the actors did a great job. The only other movie I’ve seen Joel Kinnaman in was the awful Safe House where he played the villain. Now he’s the lead and I thought he did a pretty good job, instead of playing a cold robot like Peter Weller did in the original, he has to express more emotions in this movie. Gary Oldman was great as usual, he actually has the same amount of screen time as Kinnaman. Somehow I thought of him as the scientific Jim Gordon since he helped RoboCop out a jam a few times. Abbie Cornish plays Murphy’s wife and she didn’t really have much to do but look worried or cry once in a while. It’s always nice to see Michael Keaton in a big movie but unfortunately he’s not menacing enough for a big corporate baddie, for sure he’s no Ronny Cox’s Dick Jones of the original film. Jacky Earle Haley shows up on screen once in a while as the second main villain but he’s no Clarance J. Boddicker. Last but not least is Sam Jackson, as usual he chewed up every scenes he appeared in. It’s clear that the filmmakers wrote his character to be the likes of Glenn Beck or Bill O’Reilly.

Despite some flaws, I still think this remake is quite entertaining and much more ambitious than some remakes I’ve seen the last few years. I think had the script stuck with the ideas they came up with and have better villains, the movie could’ve been as good as the original. I’m very curious to know what Aronofsky would’ve done with the movie, pretty sure his version will be as violent as Verhoeven’s. Speaking of violence, this movie maybe one of the most brutal PG13 films I’ve seen so far, just a warning to parents who are thinking about bringing your kids to see it. There’s a scene in the movie where a kid got shot, very similar fashion to the original where a guy was shot multiple times but the robot ED209, it wasn’t as graphic as that scene from the original but some might find it disturbing.

With good performances and cool action scenes, I do recommend this movie. If you’re a big fan of the original like I am, you might enjoy it but just remember to keep your expectations low.

What do you think of this new Robocop?