Greeting, all and sundry!

After taking a step back as the latest addition to The Hunger Games sweeps through theaters near and far, I’ve decided to tidy up some loose ends. With a pinch of Paula’s What A Character Blog-A-Thon. And a subtly expressed desire to learn more of the machinations of director, Stanley Kubrick.

To that end. Allow me to introduce a superb character actor. Who was born poor. Lived large and rich. Was something of a swashbuckler during World War II. And brought that vast experience to countless roles. This offering will cover four of his most popular and memorable characters. Under the assured touch of three historic directors:

Sterling Hayden: Variations On A Theme.

Who first grabbed my attention at a very tender age. Playing the towering, gruff, often dissatisfied thug, Dix Handley in John Houston’s The Asphalt Jungle. A 1950 film that is notable for its time in revealing crime being anywhere. And everywhere!

From the corner diner and soda shop run by a hunchbacked ex convict, James Whitmore. To insurance companies with policies on diamonds and other precious stones. To monied families led by Louis Calhern as Alonzo Emmerich. Who pads his family coffers through bank rolling high end heists. When not spending obnoxious sums to his his pampered girlfriend, Angela Phinlay (Marilyn Monroe).

…
To keep afloat, Emmerich moves on a diamond heist that requires a master “Yegg”. (Safe cracker). A small crew. And an expendable hooligan in the form of Dix Handley. Who walks into the conspiracy with eyes wide open. Seeing a chance for some quick money and a one way ticket back to Tennessee and his Quarter Horses.
…
Dix uses his height, voice, bulk and ominous shadows to diversions to a minimum. While taking on the role of just paroled, “Doc” Erwin Reidenscheider (Sam Jaffe’s) personal protector. The prep for the heist in the basement of a jewelry exchange is well detailed. With diagrams, maps and layouts. Lookouts are set. The vault is drilled for Nitroglycerine. An alarm goes off. Police arrive as the thieves are making their escape. shots are fired. One criminal goes down. So does a cop. And Emmerich is none to pleased to see “Doc”, Dix and two others with a satchel full of stones. And wanting their cut. NOW!

Emmerich stalls. One of Emmerich’s associates draws a pistol. Dix drops him, but catches a shot to the gut. Emmerich gives up what cash he has. Dix goes to see his girlfriend, “Doll” Conovan (Jean Hagen) for a cross country trip home. As “Doc” sedately takes the slow route home in a taxi. With a side stop to a diner and a comely young lady who catches “Doc”‘s eye. Before being recognized and pursued by police.

What Does Mr. Hayden Bring To This Role?

A solid Rock Of Gibraltar upon which to build a wondrously devious tale on the intricacies of high end crime. With Dix bullying his way when necessary. Yet unaware that his benefactor, Emmerich is spending money he doesn’t have for maps, tools and expertise required. And hoping to buy the stones cheap and sell them dearly. To remain solvent for another year.

All this is Greek to Dix. Who is willing to take the risk. For an immediate payoff. And is not really surprised when angers rise and things head south after the heist. 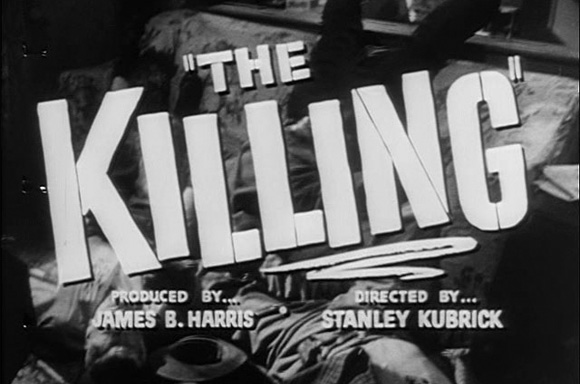 Which lays a decent foundation for a very early Stanley Kubrick ode to a “sure thing” race track heist, The Killing from 1956. Put together and overseen by Mr. Hayden as Johnny Clay. Who is much smarter than he seems and plans for every contingency as his crew comes together. Hot headed, womanizing Val Cannon (Vince Edwards). Over the hill, former race track cop, Marvin Unger (Jay C. Fliippen). Nebbishy numbers guy, who knows a reasonable fence, George Peatty (Elisha Cook, Jr.). And creepy as Hell looking, budding sociopath, Nikki Arcane (Timothy Carey).
The men gather. Talk about non specific specifics regarding the heist amongst smoke laced, still air and naked, shadow casting light bulbs above a poker table. Each has a task. either inside the race tracks terminus and betting windows. Or beyond in the parking lot that skirts the backyard stretch. Everything depends on the day’s last race. Plus time for the losing bettor’s money to be gathered and put in the Counting Room. And afterwards the vault. The trick is for Clay and his crew to intercede after the count and before the vault. To the tune of two million dollars. Serious money, indeed!
…
Secrecy is essential. But men will be men. Egos will be egos. And Clay and Peatty have girlfriends. Clay’s girlfriend, Fay (Colleen Gray) is frightened of her man. While Peatty’s wife, Sherry (Acid tongued and cheating, Marie Windsor) has other plans. Courtesy of Val Cannon in a classic double cross.

The day arrives. The races are run. Money is gathered. The last race comes up. Nikki waits with a rifle in his red convertible as the gates opens and the race starts. The diversion occurs at Nikki’s hand. Everything goes as planned. Though a guard does manage to get shot and Johnny is wounded. Double crosses happen. Members of the crew are killed. Clay and fay seek any of numbers of ways out of the city ahead of news reports. Airline tickets are purchased and their suitcase full of money is weighed, tagged and sent on its way to the waiting, idling airliner…

I’ll leave it right there. Lest I move into spoiler territory.

What Does Mr. Hayden Bring To This Role as Johnny Clay?

An iron fist inside a somewhat clumsy glove. There are members of Clay’s crew whom he knows. And others he does not. Using greed and the allure of big money, he does get them to work together. When a few aren’t busy working their own angles. To claim their prize at the end of the rainbow. Those whom Clay cannot intimidate. He sometimes brow beats as dents and small problems are worked out.
…
Refreshingly, the ladies, or dames in attendance are often just as greedy and clever as the men. With Marie Windsor’s setting the standard for ruthless molls to come.

In a straightforward, B&W shadow filled and close to Noir heist film. That looks and feels like a procedural. Completely from the criminals’ point of view.

Dr. Strangelove or: How I Learned To Stop Worrying And Love The Bomb (1965)

Which brings in a later, 1964 Kubrick film. A Doomsday, Black Comedy filled with superb, deadpan comedic talent. And a heavt hitting supporting cast much more recognizable for drama. Yet excelling at comedy. Dr. Strangelove or: How I Learned To Stop Worrying And Love The Bomb.

Mr. Hayden’s role is mostly dramatic. As the commander of a Strategic Air Command Base, General Jack D. Ripper. Who has sent his wing of B-52s off their “Fail Safe Points” to bomb Moscow and cities beyond. Encompassing all the physical attributes, gestures, pauses and enunciation of Four Star General Curtis E. LeMay (The Grandfather of SAC). As he explains in his own warped logic, his reason for eradicating Russia from the map. To a befuddled, prim and proper RAF Group Captain Lionel Mandrake (Peter Sellers in one of three diverse roles).
Mr. Hayden’s General Ripper is one of the few straight dramatic roles. And gets the ball rolling to an at first nervous, then frightened and near Panicked Pentagon. Its War Room, Big Board. Russian diplomats and dryly funny use of “The Red Phone” as solutions (Outside of the Army overrunning and taking back the SAC base and arresting Ripper) are sought. Cutting between the Pentagon and the lead B-52 piloted by Major “King” Kong (Slim Pickens) as it dodges missiles and gets ever closer. Then back to the War Room and the besieged Burpleson Air Force Base. And Ripper supplying offensive fire with a .30 caliber Browning Machine Gun pulled from a Golf Bag (Don’t ask!)With cuts getting shorter, tighter and more suspenseful as new courses and targets are selected by Kong for his bomber.

What Does Mr. Hayden Bring To This Role as Gen. Ripper? 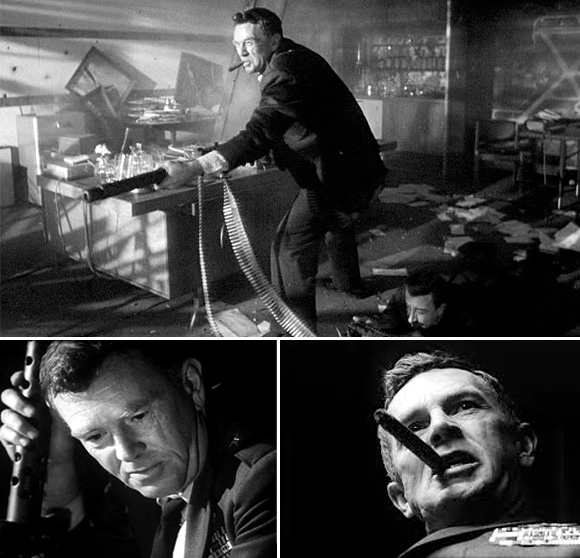 One the most accurate physical portrayal of an American Military icon in cinema. Shot from low set cameras angled high to bring forth the full measure of a man feared and respected more than the Presidents of two administrations in the early 1960s.

Mr. Hayden’s and Ripper’s soliloquy to Peter Sellers’ Mandrake regarding Clemenseau. The Military Generals, Politicians and war could easily have been uttered at any time during Kennedy’s embarrassing “Bay of Pigs” invasion and fiasco. Or his later mediocre redemption during The Cuban Missile Crisis. Which, I believe is one of the reason the film works and has aged so well. The possibility of “What if?” taken to first, dramatic and later, comedic extremes.

Which created an eight year sojourn into smaller films and larger plays. Creating the opportunity to fulfill a small, but essential role as corrupt, bought and paid for Captain McCluskey in Francis Coppola’s landmark, The Godfather.
…
Though Mr. Hayden isn’t on the screen very long. He makes more than the most of each scene. Radiating intolerance, arrogance and bullying legal brute force. From the moment McCluskey pushes through the clutch of uniformed cops to confront an equally arrogant and sarcastic Michael Corleone. (Al Pacino). Before breaking a sinus and jaw while clocking him into the next time zone.
…
Throwing down the gauntlet for all to see. Before inching back as Tom Hagan (Robert Duvall) rolls up and disgorges an equally large group of plain clothed, licensed and armed “investigators” to protected the hospitalized and moved Don Vito Corleone (Marlon Brando). In that fleeting moment there is a palpable hate between the two. Enough to tinge Michael’s later compound strategy with Tom and Sonny. To a bit more “personal” than “business” regarding the expedient demise of Sollozzo and McCluskey.
…

What Does Mr. Hayden Bring To This Role in The Godfather?

A thoroughly unlikeable character in Captain McCluskey. Who seems to tower over most with rigid posture. A thrust out chest and chin. And enough experience intimidating others to be openly snide with his comments. Especially his “punks like him” comment after frisking Michael on the way to the restaurant summit and double homicide.
…
Was I pleased with Mr. Hayden’s performance? Absolutely! I couldn’t come up with a comparable actor for the role while reading Mario Puzo’s novel. And I felt more shock than surprise or sadness when McCluskey met his fate.
*** 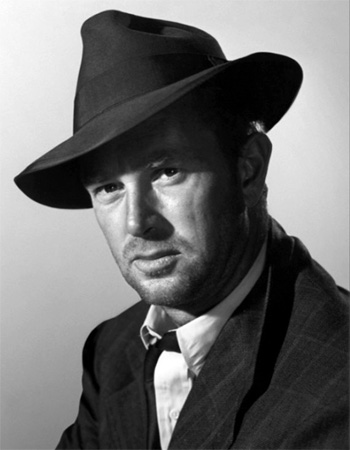 Sterling Hayden epitomized the Hollywood “Tough Guy” through the 1950s and 60s. Often down and out and with few options. Who could deliver and take punches on the same level as Robert Mitchum. And handled firearms with respect and familiarity. And full knowledge of what they could do.

Overbearing? Sure. When the character required it. Though there were smarts in abundance behind that steely gaze. Either from experience or the school of hard knocks. Very much like Burt Lancaster. Though not nearly as physical. Willing to play unlikeable characters. And never apologizing for it.
…

…
Thoughts on Sterling Hayden and/or any of his roles mentioned above?