When I first saw this trailer, I’ve got to admit that I found the premise to be quite hilarious. Former SNL cast member Jason Sudekis plays a small-time pot dealer David, who has to assemble a fake family for a mission to transport a ‘smidgen’ of pot from Mexico. He’s convinced that under the disguise of a family on vacation, they wont run into scrutiny by the border crossing guards.

The first 20 minute or so sets up each of the ‘family’ member and how they ended up agreeing to do this crazy journey together. One of the movie’s highlights was when the ‘family’ first met on the plane on the way to California before they drive to Mexico. I think the situation itself lends to hilarity as they tried to conceal their identity. Though she has such a limited range, Jennifer Aniston is more watchable in comedies than rom-com. There’s a comical moment when she arrives on the plane looking like a demure suburban soccer mom, complete with sensible shoes, but then again she was not believable as a stripper to begin with.

Interesting that I first saw Sudekis in another Aniston movie The Bounty Hunter where he’s basically reduced to a pathetic admirer of her character. This time he’s got the leading role, though his character also pines for Aniston’s Rose, a stripper who’s desperate for cash after she gets evicted from her apartment. I think both Sudekis and Aniston have a natural chemistry together, though for me, the scene stealer is Will Poulter as Kenny, the virgin teen who lives in the same building as David and Rose. He kind of reminds me of Tintin, so maybe he’d be a good fit if they want to make a live action movie of the Belgian comics, ahah. Kenny is instantly likable and hilarious, the scene of him singing the Waterfall song by TLC is a hoot! I just realized that the 20-year-old actor is English who was in The Chronicles of Narnia, which totally floored me as he was so convincing as an awkward Midwestern kid. Emma Roberts is just ok as the Millers ‘daughter’, she’s the least memorable of the ensemble, I think a more comedic young actress would bring something more to the table. 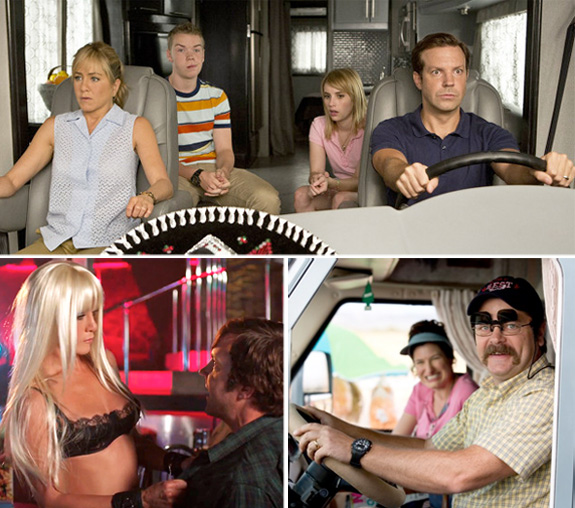 To me the funniest moments are when the Millers get to Mexico in that giant RV, especially when they encounter a fellow RV-travelin’ tourist family after they managed to cross the border in Mexico. Nick Offerman and Kathryn Hahn play this squeaky clean, longtime husband and wife who are eager for some adventure to spark up their marriage. Offerman is one of my favorite comedians working today, the guy is naturally hysterical with his deadpan humor. I’d love to see him in a leading role for a change. French actor Tomer Sisley, whom I quite like in The Heir Apparent, was sadly wasted here, playing a stereotypical drug lord as the lame villain of the movie.

I’m usually not into raunchy R-rated comedies, I don’t know, endless profanities just don’t translate to entertainment for me. No doubt there are tons of that here, with vulgar scenes galore and some are quite offensive. The scene with Luis Guzmán as a Mexican cop asking for sexual favors in return of monetary bribe is just downright crude, but nothing could prepare me for the scene when Kenny’s um, testicles get bitten by a Tarantula! Aniston’s stripping scene doesn’t seem risqué by comparison, heck, it’s really nothing more than her showing off that she’s still got a hot bod at 44. One thing for sure, this is a comedy about family that’s definitely NOT for the whole family.

Overall, despite some hilarious moments, I feel like the premise has a lot more potential than what a team of four writers came up with here. I think under a more deft script and direction, this road trip movie could’ve been a comedy classic. At the same time, there’s enough going for it to keep me engaged throughout and some moments actually had me in stitches. So for that I’m going to be pretty generous in my rating. Comedies is tough genre to recommend as what people find funny vary so much, but I’d say this one is at least worth a rental.

Thoughts on this movie and/or the cast?