Nicolas Winding Refn made a name for himself after directing 2011’s Drive, many thought that film should’ve been nominated for best picture at the Oscars. I really enjoyed it but I thought it’s more style-over-substance type of movie, so when Only God Forgives was announced as his next movie, I hoped it would actually be less style and more good storytelling. Unfortunately that was not the case, in fact OGF might be a prime example of a film that’s all style and not much substance.

The film begins with a scene at a Thai boxing arena, we’re first introduced to Julian (Ryan Gosling) and his brother Billy (Tom Burke). We then were shown that the boxing arena is actually a front for drug dealings runs by both Julian and Billy. Later Billy decided to go out and have some fun. He went to a local whore house and asked the pimp if he has any 14 year girls that he can have sex with. The pimp told him no and Billy went crazy and beat up him up. A few minutes later, Billy was able to find a young hooker on the street. The next scene we see cops are surrounding a hotel where Billy took the young hooker.

Here’s where we were introduced to Chang (Vithaya Pansringarm), he’s some sort of a police chief and pretty much the judge, jury and executioner. As it turned out, Billy raped and murdered the young hooker. Chang surveyed the scene and then brought in the hooker’s father, he let the father go into the room and beats Billy to death. Then Chang lectured the father about letting his daughter have sex for money, the father begged for his forgiveness but Chang decided to punish him by chopping one of his arms off. Later on, Billy’s and Julian’s mom Crystal (Kristin Scott Thomas) arrived from the States. She wants revenge for her son’s death and orders a hit on everyone who was responsible for his death.

There’s isn’t much story in this film, it’s basically a revenge flick that involves people killing one another. Refn seems to be more interested in showing moving images than actually telling a story. Here he mimic other filmmakers such as Kubrick, Lynch, Malick and his idol Alejandro Jodorowsky. In fact, he dedicated this film to Jodorowsky and the film kind of reminds me of Santa Sangre, Jodorowsky’s weird thriller that involves a mother and son. Many shots in the movie reminded me of Kubrick’s The Shining and Lynch’s Blue Velvet. Then there’s the visual and music which reminds me of Malick’s films. I think this was one of the few films I saw where the cameras hardly moved, Refn seems to be using many steady cam shots and have his actors do most of the moving around.

Performance-wise, I think the actors did as well as they could considering that the script had no plot whatsoever. Gosling hardly spoke throughout the film, all he did was either stare at the actors across from him or walking around looking somber. I’m not sure what Refn wanted out of that role. I’m curious as to how the character would’ve turned had Luke Evans starred in it, he had to back out because of scheduling conflicts with The Hobbit. Pansringarm’s Chang is some kind of god or higher power being, he walks around with dark clothes and no one can seem to hurt or kill him, my assumption is that the film’s title refers to him. I think the best performance belongs to Kristin Scott Thomas, she reminded me of Gary Oldman’s performance in Leon: The Professional. It’s way over the top performance but you somehow believe that kind of person do exist in real life. 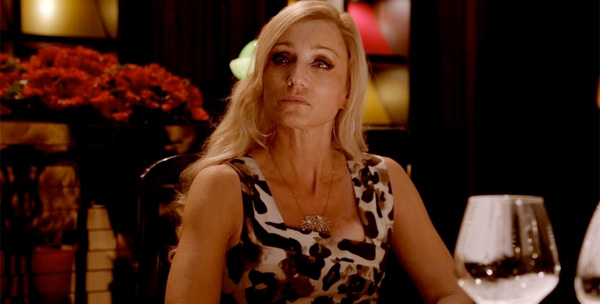 There’s been a lot of talk about the film’s violent content and yes it’s quite brutal. But not as bad some of the more extreme films such as Irreversible, Hostel or any of those torture porn flicks. Refn actually cut away some of the more violent scenes or he just didn’t show it. I’m actually glad he did that because I don’t think I can handle some of the more brutal scenes, like the rape of the young hooker, I hate rape scenes, I find them more disturbing and disgusting than seeing someone getting their head blown off. Now he did show some quite violent sequences, especially the scene where Chang tortured a guy who put out a hit on him, that was hard to watch.

Despite my not-so-enthusiastic review, I actually enjoyed this film. It has some great visual shots, Refn and his camera guy really did a good job of capturing the gritty look of Bangkok. There are some cool action sequences too, I really like the way Refn set up the scene where Chang and his men were ambushed by a bunch of thugs. But the highlight sequence for me was the much-advertised fight scene between Julian and Chang. Those expecting a big fight like other martial arts films will probably be disappointed, the fight actually ended pretty quickly. Since Chang is an experienced kick-boxer, he was able to kick the crap out of Julian easily. Thai actress/pop star Yayaying Rhatha Phongam, who’s apparently a big star in her native country, plays a call girl whom Julian is a frequent customer, but her role is not really significant in the film.

With a better script that focuses more on storytelling and characters development, this could’ve been a great crime thriller. I wanted to know more about Julian’s relationship with his mother, it sort of implied that she had sex with both of her sons, which is why both of them are so messed up. Then there’s Chang. Even though he’s written as this sort of higher being, I wanted to know more about him. If this was written by Quentin Tarantino, I think it would’ve been a great gangster flick. Even though I have a lot of complaints about this film, I really liked it and probably will see it again soon. Fans of Drive might be disappointed though but if you’re a fan of Kubrick, Malick or Lynch, you might like this film.

Thoughts on this film? Agree/disagree w/ this review? Well, let’s hear it!