Hello everyone! Hope y’all had a nice weekend. Yes I know it’s a bit late of a weekend roundup, but I spent the last five days in sunny California, which was a much-needed break.

Two of my best friends recently moved to San Diego and Tempe, Arizona respectively, so it was sort of a mini-reunion for my hubby and I as the four of us spent the entire Fourth of July weekend together. It’s quite a hectic trip as we ended up not only visiting San Diego and La Jolla but we also made it to Los Angeles, Long Beach and the picturesque Catalina Island. Suffice to say, there’s no time left for movie-going, which actually suits us just fine. It was awesome to watch the spectacular San Diego fireworks right from our hotel as it’s right on the Bay! Thankfully they didn’t have the snafu like last year when it all exploded at the same time.

As you might’ve guessed, my La Jolla visit wouldn’t be complete without a trip to the La Jolla Playhouse at the University of California San Diego. Classic Movie buffs would know the non-profit theater was founded by my crush Gregory Peck, along with Mel Ferrer and Dorothy McGuire.

Though I wasn’t at the movies, I did spend some time with some iconic movie characters in Hollywood 😉 We didn’t originally set out to go to L.A. but we sort of decided on a whim Friday afternoon and it turned out to be a blast! Here are some pics we took of the character impersonators on the famous landmark by the the TCL Chinese Theater (formerly Grauman Chinese Theater). Only on the streets of Hollywood that lifelong nemesis Batman and The Joker would be the best of friends 😀 Too bad the photo was blurred but it was a hoot seeing superhero rivals Superman & Spider-Man counting money together, ahah. I wonder how much these guys make in a day. 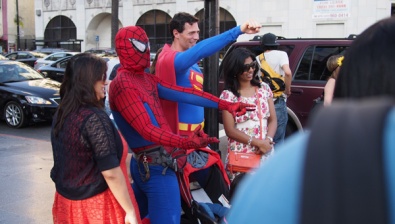 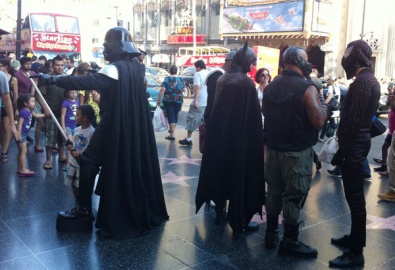 Just a day for Cosplayers in Hollywood Blvd

We happened to catch this brooding mutant in a cheerful mood 🙂 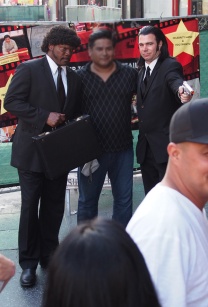 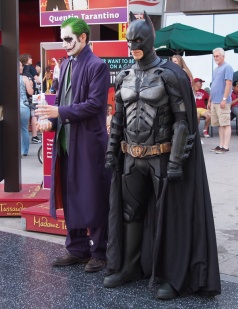 …
My favorite is Wolverine as the guy’s looks just like Hugh Jackman it’s uncanny! There were actually two Wolverines in the same spot by Jackman’s Hollywood Walk of Fame’s star, but the bigger guy’s sideburns actually looks more like Elvis, ahah.

Oh, and of course I had to take a picture on Gregory Peck’s hand/footprint at the TCL Chinese Theater. Look at how tiny my hand is compared to Mr. Peck’s 😀

Now, as far as box office is concerned, even as I looked up to The Lone Ranger statues atop the Masonic Temple Building next to the El Capitan theater, somehow I knew the movie’s gonna be a big bomb for Disney. Sure enough, according to Terrence’s Movie News Monday and Tim’s Box Office Prediction, Despicable Me 2 left that ultra expensive ($200 mil) Western Comedy in the dust. Certainly the 25% rating on Rotten Tomatoes didn’t help matters, though some folks actually dug it, i.e. Fogs actually gave the movie an A-. I probably would end up renting The Lone Ranger as I missed the screening, but I might see a matinee showing of Despicable Me 2 as I adore those overalls-wearing yellow minions!!!

Well, as I said last week, it’s been a s-l-o-w return to blogging for me. I even missed Five for the Fifth this weekend which is a bummer, but ah well, it’ll definitely be back next month. In any case, I’ve got some post ideas in the works and of course reviews and guest posts from our *staff* Jack Deth and Ted S. I’ll be seeing a screening of Pacific Rim tomorrow, so hopefully I’ll be able to review it by this weekend.
…

Now indulge me, how was YOUR weekend movie watching? Any new favorites?

51 thoughts on “My [California] Weekend Roundup”