Two of the films I was impressed with at MSPfest happen to be directed by women. One was Mira Nair’s The Reluctant Fundamentalist, which is as far away from this one in terms of tone and subject matter, but I’d highly recommend both. I like the fact that this one is a comedy, it’s quite rare to see a well-written comedies these days that don’t contain overly foul language and/or crude sexual/bathroom humor. Thankfully, this debut film from Lake Bell contains neither, but it definitely delivers the laughs and then some.

An underachieving vocal coach is motivated by her father, the king of movie-trailer voice-overs, to pursue her aspirations of becoming a voiceover star. Amidst pride, sexism and family dysfunction, she sets out to change the voice of a generation.

As someone who watch at least half a dozen movie trailers a week, the premise definitely appeals to me. In fact, earlier today I saw a trailer of Inescapable that pretty much had this cheesy VO narration that tells you the plot of the story. The protagonist of this movie, Carol (Lake Bell), lives under the shadow of her voice-over star dad Sam Solomon (Fred Melamed). After being kicked out of her dad’s house to accommodate for his new young wife — which Carol refers to as his groupie — she has to pack her bags and live with her sister.

As a vocal coach, Carol often has to coach certain celebrities when they have to adopt a certainly adopt a certain accent, but voicing a trailer is still pretty much an elite boys club. An opportunity suddenly presents itself when a big studio is looking for a voice over for a quadrilogy blockbuster sci-fi franchise and with the help of her friend Louis (Demetri Martin), she just might have a chance to break into the glass ceiling of that industry. The whole VO competition involving her dad and another VO star Gustav, an eccentric douche bag who takes a shine on Carol, provide most of the laughs. Ken Marino is a hoot as Gustav, a familiar face though I can’t quite put my finger on what movies I’ve seen him in. There’s also a comical side plot about Carol’s sister marital infidelity involving a seductive hunk in the form of Irish hunk Jason O’Mara. Seriously who could resist him with his natural Irish brogue 😉 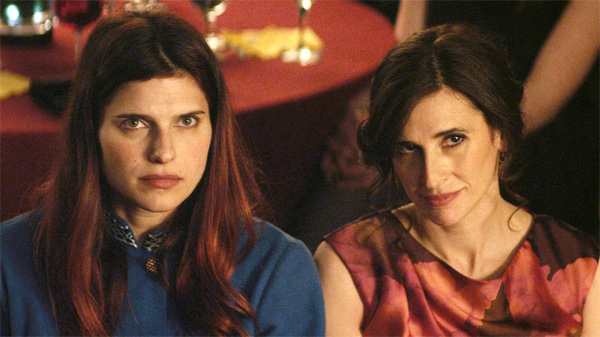 This is the first time I’ve seen Lake Bell, though I’ve heard of her before this movie. She not only star in this but also wrote and directed her debut film, and I must say I’m impressed! She’s got excellent comic timing and a knack for accents, and the story is surprisingly engaging and downright hilarious. The tall and svelte Bell could make a living as a model but she really made herself to look very plain here as a perpetually-disheveled tomboy whose ‘signature look’ is a denim overall. But she’s instantly likable and she surround herself with equally affable and amusing characters.

It was fun to see cameos from Geena Davis, Eva Longoria and Cameron Diaz as well, the scene of Longoria struggling to say just one simple line with a British accent had me in stitches! This movie premiered in Sundance a few months ago and I hope it’ll get some decent distribution in the coming months. I’m glad I got to see this comedic gem, and it’s one I actually don’t mind seeing again.

Thoughts on IN A WORLD and/or Lake Bell?