Hi everyone! My weekend roundup is slightly delayed this week as I also got Monday off. Well I ended up seeing quite a few movies in the comfort of my home cinema. These are the four films I got to watch in my three day weekend. 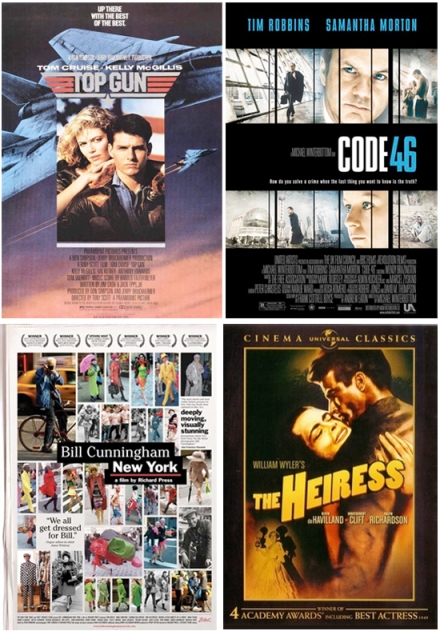 Thanks to Ted for lending me his Top Gun Blu-ray, my hubby and I watched it on Friday night and despite the inevitable 80s cheese-fest, the movie is still pretty darn entertaining! I remember being so wowed by it when I first saw it on the big screen two decades ago. All the flying sequences made me dizzy on the big screen, but it wasn’t too bad seeing it on my smaller TV screen. Of course, when the Berlin song Take My Breath Away played on, I was swept by the feeling of sweet nostalgia! 😀

There were few movies bigger than Top Gun in the mid 80s and Tom Cruise’s career shot up to super-stardom. Amazing that he still remains there today, but the same can’t be said for the rest. I mean, Anthony Edwards became a TV star because of E.R., Meg Ryan became the queen of rom-com, Val Kilmer starred in high profile movies and even became a superhero (Batman), but Kelly McGillis never really got another memorable roles since. But today, Meg seems to have disappeared from Hollywood, Val has lost his svelte figure, and most tragic of all, we’ve lost director Tony Scott to suicide 😦 So not only does Cruise seemed to have drank from the fountain of eternal youth, he’s pretty much still got that movie star status. That’s really quite a feat after 27 years!

Anyway, here are my mini reviews of the rest:

A futuristic ‘Brief Encounter’, a love story in which the romance is doomed by genetic incompatibility.

I’ve been wanting to see this film for quite some time but when my pal Mark mentioned Tim Robbins and Samantha Morton as his favorite cinematic pairing in this post, I finally decided to see it this weekend. I’ve always been a fan of sci-fi romances, and nothing is more tragic when human’s free will cease to exist and totalitarian government enforces rules as to who we can and can’t love.

The film takes place in a not-too-distant future where city security zones are enforced due to a climate disaster, and cloning and genetic manipulation has become the norm. A strict global law called Code 46 is especially troubling, as it makes the union of two people with genetic similarities illegal. The film opens with William (Robbins) traveling to Shanghai to investigate an identity fraud case for the Sphinx Corporation. During his travels, he runs into María (Morton) and though he realizes she’s the one who committed the fraud, somehow he covered up for her. A forbidden affair ensues after they spend the night together, but the fact that William has a wife and young boy is the least of their complications. 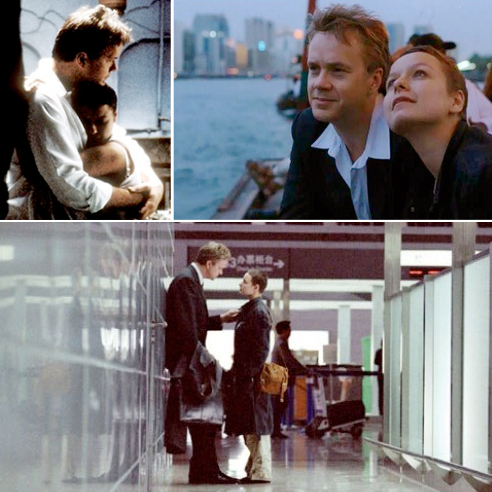 I’m not going to go further into the plot as it’s best that you discover the predicament the two people are facing and what they have to do to be together. I have to admit though that because there are sooo many details about the universe this film is set in that I actually had to read more about it in order to grasp just what the heck is going on, especially involving the empathy drugs and other medical procedures that’s become prevalent in their world.

Though the romance is not explosive, nary of melodramatic declarations or the likes, there is a painful honesty between Robbins and Morton that is so heart-wrenching. Towards the end though, there is one scene as they run away together that I find pretty shocking for its brief graphic nudity. Now, I always think that most of the time such scenes are unnecessary as a suggestive depiction could’ve made the same impact and I feel the same way here. That said, I’m not going to hold it against the filmmaker as the scene is not without emotions. One can’t help but feel for this couple, no matter how ill-advised their union has been from the start.

What makes it more intriguing is the small details of this futuristic world, especially the language used that’s a mix of English with other languages like Spanish, Mandarin, and Arabic. The characters use “Ni Hao” or “As-Salamu Alaykum” to greet each other, the Spanish word “palabra” for “password”, etc. The most important legal document of that world is called “papelles” which is a made up word that sounds French. Despite the relatively low budget, somehow director Michael Winterbottom manage to make this film look futuristic-looking by using sleek, modern buildings in Shanghai, etc. and some of the gritty market/street scenes has a Blade Runner vibe to it.

One thing for sure, despite the slow and sometimes sullen mood of the film, this is one of those film that linger with me long after the film is over, especially after it’s revealed what happens to William and Maria in the finale. Worth a look for fans of sci-fi romances, I wish they made more films in this genre.

Chronicles a man who is obsessively interested in only one thing,the pictures he takes that document the way people dress. The 80-year-old New York Times photographer has two columns in the paper’s Style section, yet nobody knows who he is.

Truth be told, I didn’t know who Bill Cunningham was until this documentary was made, but I must have seen his photos on the fashion magazines/blogs. He’s the pioneer of street fashion photography since he published an impromptu set of pictures in the New York Times which then became a regular series. He basically takes photos of fashionistas in Manhattan that catch his eye, using a 35mm Nikon as he rides his Schwinn bicycle around town. His ‘uniform’ is a blue nylon jacket, and a convenience-store bought poncho filled with black masking-tape patches all over it as he refuses to buy a new one when it gets torn.

When you watch this, it’s guaranteed that you will fall in love with this man. He’s just so endearing for his eccentricities, but you’ll also admire him for his integrity and work ethic. I find him to be even more quirky and a rare human being, much rarer that even the most bizarre piece of fashion he photographs, and you’ll see some really out-there stuff in this film!

All the fashion stuff is fun and dandy, but what I love most about this documentary is to get to know Bill the man, the person behind the lens and all those fashion photographs. He does what he does because he loves it — he practically shuns money almost to a fault, refusing to cash his check according to his former boss at Details Magazine. It’s never fully explained why, but basically the 83-year-old refuses to sell out to anyone as he values his creative freedom more than anything. He’d rather be allowed to do what he wants than being paid to ‘conform.’ He also doesn’t allow himself to get caught up in the glitz and glamor of the fashion world. When he does go to lavish parties (even to Lady Astor’s 100th birthday party), sitting on the front row of fashion shows, he doesn’t even take a drink of water offered to him. He said he always eats before he goes to work and he’s only there to do his job, not to hobnob with the rich and famous. 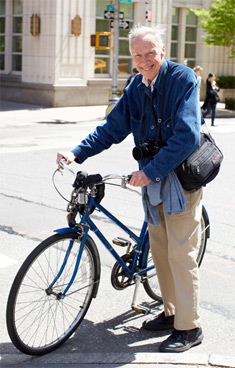 What really gets him is fashion and he is married to his work, which he doesn’t call work at all as he enjoys it so much. There’s a twinkle in his eye and he has this huge grin on his face when he’s out in his element photographing people and he’s well-loved in the fashion community. “We all get dressed for Bill“, says Vogue editor Anna Wintour who’s frequently interviewed in his documentary, and Bill appreciates fashion. He sees the beauty even in outfits most of us would deem as too weird or even ugly.

What’s fascinates me most is the contrast between Bill’s minimalist, even monastic lifestyle and the glam and glitter of the subject he’s covering. At one time, the filmmaker was baffled to learn that he goes to church every Sunday. Later on he was asked about his personal life, whether he ever has a romantic relationship and whether he’s gay, which he nonchalantly replied. But when the question turns to his faith, as to why he goes to church every weekend, suddenly the cheerful man choked up and grew quiet. It’s clearly a personal matter to him and after a long pause, he admitted that his Catholic faith ‘gives him guidance.’ It’s something he needs in his life, and to me, it makes so much sense and in a way it explains how he’s able to live the way he does.

I highly recommend this documentary to anyone who loves to learn stories about intriguing people. Mr. Cunningham definitely fits the bill and you’ll also meet other fascinating patron of the arts, like Editta Sherman, the 100-year old photographer dubbed “Duchess of Carnegie Hall” who was once Andy Warhol’s muse. Bill and Editta were two of the last few members of Carnegie Hall Artist Studios until the planned building renovation in 2010. 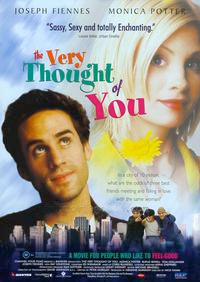 Oh, I also rewatched this late 90s British rom-com The Very Thought of You which I saw quite a while ago because Rufus Sewell is in it. It’s actually a pretty decent movie written by Peter Morgan (The Queen, Frost/Nixon, The Last King of Scotland) and directed by Nick Hamm (Killing Bono). I find it especially amusing as the protagonist Martha (Monica Potter) is from Minneapolis and there’s a brief scene at Mpls/St Paul airport with Tom Hollander. Mostly the movie is set in London though, which is a big plus for me.

The cast is full of talented but underrated British actors: Sewell, Hollander and Joseph Fiennes as three lifelong friends who all fall for the same woman. Oh and Ray Winstone also has a small role as a sympathetic neighbor, a far cry from his usual violent mobster roles! It’s nice to see the normally intense actors playing a light, fluffy rom-com. It’s surprisingly enjoyable though I wouldn’t rate it as the best in the genre. I’d say give this a shot if you have Netflix Instant, especially if you’re a fan of any of the actors.

I will have the review of The Heiress next week. I’m sort of still mulling it over, but it’s definitely an excellent film from William Wyler that can’t be pigeonholed into a certain genre.

Well that’s my weekend viewing roundup, folks. Any thoughts on these films?