I’m afraid it’s going to be a short post today as I’m getting ready to post this month’s Five for the Fifth for tomorrow. 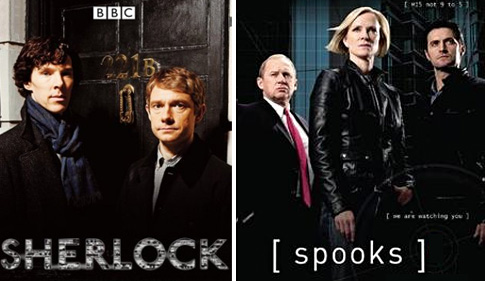 I’ve clearly been bitten by the BBC TV bug as I’m so addicted to both these shows! Those who’ve seen at least one episode of either one of these would surely understand. I’m sooo anticipating the arrival of season 2 of Sherlock coming to PBS Mystery this Sunday, yay! Check out the trailer below, as the super detective says… “I wouldn’t miss it for the world!”

…
As for Spooks (or MI-5 as it’s called in the US), I’ve mentioned last Tuesday that I’m only going to catch up with Season 7 – 10, or you could say, since Richard Armitage joined the cast, natch! I’ve always loved a good espionage thriller and Spooks definitely delivered. Just like Sherlock, it’s impeccably-written, superbly acted and beautifully-shot. I love that it portrayed London in such a fascinating way, and not just the glamorous side of the city. This is the trailer that got me to finally watch this show, now of course it’d be nice if Rupert Penry-Jones had been around longer to work with Richard, but maybe that’ll be eye-candy overload, ahah.

…
There are a quite a few connections between the two shows, well other than airing on the same network. Benedict Cumberbatch apparently had an uncredited cameo in an earlier episode of Spooks back in 2003 (when Matthew Macfadyen was still the lead actor).

And recently, the actress playing Sherlock‘s love interest Irene Adler, Lara Pulver, was actually Richard Armitage’s co-star in BBC’s Robin Hood as Guy of Gisbourne’s sister Isabella. She also has a role in the last season of Spooks as the new Chief of Section D. Wow, she’s one busy girl… and very, very lucky! From what I’ve seen in her clips with Sherlock, she’s certainly poised to juice up the already stimulating show 😉

I think it’s awesome that the main cast of BOTH shows, Benedict Cumberbatch, Martin Freeman and Richard Armitage are ALL going to be in The Hobbit! Man, I’d give anything to work for FREE for just a day on that set!

Anyway, I guess the good thing of being so far behind on TV watching is that I have a wealth of episodes to catch up on. These two shows definitely satisfy my penchant for easy-on-the-eyes British guys and the oh-so-witty writing! 😀

Are you a fan of either of these? And tell me, what show(s) are you completely hooked on lately?