Greetings, all and sundry! Once again, I would like to take advantage of Ruth’s largesse and wax poetic about a film that cemented my belief that Robert Duvall is a solid talent to be reckoned with. In what many consider to be a ‘Criminal Revenge B-Movie’, but is so much more! Hence, I proffer.

Made on a well-and-frugally-spent budget that wouldn’t cover a day’s catering bill for a Spielberg or Cameron blockbuster. Director John Flynn gets maximum bang for the buck by also adapting and supplying the gritty screenplay in a no frills take on a novel by Donald E. Westtlake. Enriched by a soundtrack by Jerry Fielding and a tried and true cast of up and coming talent and an always reliable rogues gallery of stalwarts.

The film begins with small time crook, Earl Macklin. Superbly played by Robert Duvall, being released from prison after two years and change for a concealed gun charge. Macklin does his time well. A stand up guy who doesn’t say a word about ‘The Outfit’. A euphemism for organized crime out of Chicago that has branched out into the Midwest and West.

That is, until Macklin is informed by his girlfriend, Bett. Well played by a sultry Karen Black. That Macklin’s brother recently became a loose end and was murdered by The Outfit. Who subsequently have a contract out on Macklin. Who takes the news in stride and decides to get the band back together. And to get the $250,000 Macklin thinks he’s owed for his time behind bars.

Macklin’s first stop is his partner-in-crime, Cody. Played with ‘Good Ol’ Boy’ easiness masking a violent rage, by Joe Don Baker. Fresh from  his role of psychotic money collector, ‘Molly’ in the incredibly under rated, Charley Varrick. Cody hasn’t anything pressing or better to do. So the two crash an after hours, Outfit backed poker game.

Next stop. Some better, heavier hardware and a decent set of wheels. Enter always dependable, Richard Jaeckel’s Chemey. Who lives out in the middle of nowhere. Has a ramshackle house and even older garage where he tinkers away on automobiles and their engines. His pride and joy is a nondescript Volkswagen Beetle. Into which he’s planted a Porsche engine. A superb getaway car. That looks like a VW. Acts like a VW. But try as he might, Chemey cannot make it sound like a VW! 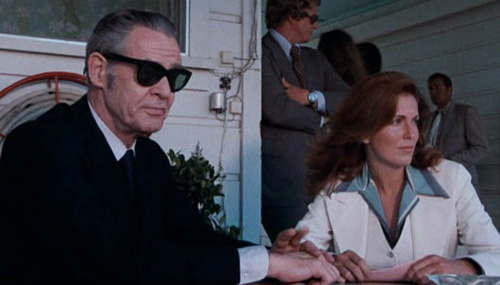 This raises the ire and anger of  the local Godfather, Mailer. Exceptionally played by Robert Ryan in his last film role. As a man slowly losing his grip on his fiefdom while young Turks circle about. Aided by the always creepy Timothy Carey as his adviser and bodyguard, Menner. Who unwisely decide to go all Bunker Mentality as lackeys and minions are taken down.

Taken out or otherwise disabled as Macklin and Cody prepare for a final showdown at Mailer’s resplendent manse and stables!

What Makes This Film Good?

Watching Robert Duvall being given free rein to expand horizons set in supporting roles in The Godfather  and Joe Kidd. Playing a character who may not be very likeable at first, but grows on you. Letting his eyes and face do the acting while given the news of his brother’s murder. While understanding his desire for some well earned payback. Not just by confronting his nemesis, Mailer, but expanding his options to let Mailer bleed financially. Weakening the crime boss. Not just in the eyes of his gang that’s always looking for a weakness to exploit, but in the eyes of the bosses in Chicago. Who like things to run smoothly and are even quicker to fix ‘problems’. Watching what Macklin and Cody do from a distance is wonderfully intriguing to watch as a two front war opens up on Mailer.

Cinematography by Bruce Surtees is exceptional and has a distinct Noir influence as Macklin and Cody go about their business of robbing and pillaging. Often employing unique shots as our hero slides into and out of shadow slashed corridors that only heightens the suspense that Jerry Fielding’s eclectic, though effective soundtrack deftly tickles. Dialogue is kept to a minimum, because actions throughout speak louder than words.

A well-executed and very straight line story completely bereft of sub plots and other distractions. Deftly handled by a director and crew that know their business. Guiding a cast of up and coming talent in Robert Duvall and Joe Don Baker. Subtly backed up by a Who’s Who of venerable veterans. 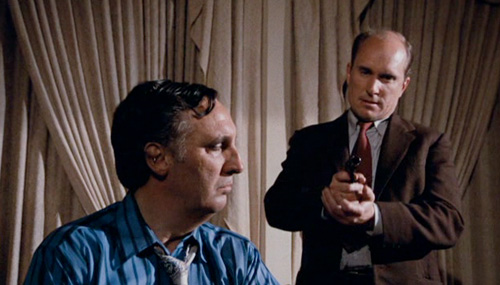 From Robert Ryan, Joanna Cassidy, Timothy Carey and Elisha Cook Jr. To Richard Jaeckel, Sheree North, Bill McKinney, Jane Greer and Karen Black. No matter what the size or duration of their respective roles. All are made unique and memorable. In a near forgotten gem that is the definition of being more than the sum of its parts!

Thoughts on this film? Do share ’em in the comments.