Yuu huu… it’s raining trailers this week isn’t it? First we’ve got the final Batman saga The Dark Knight Rises from Christopher Nolan, I’m sure y’all have seen the epic trailer by now. Well, I was watching The Artist [a flawless movie, review to come] on an advanced screening last night so I missed all the festivities around The Hobbit trailer release, but as soon as I get home I just had to fire up the trailer… see it below if you haven’t already:

Before I go on, here’s my two-cents on this trailer:

This beautiful trailer brings back memories of why I LOVE Peter Jackson’s Lord of the Rings trilogy in the first place. The trailer captures the visual style and mood of the trilogy that we’ve come to love, but this time there’s one cast member I’m SUPER excited about… Richard Armitage! I announced his casting news in October of last year, so I kept waiting for Gandalf to announce the dwarf leader Thorin Oakenshield… Whoa, he still looks hot under the dwarf make up, and boy he gets to sing, too!! One of the things I love about Richard is his deep baritone voice (just like Gregory Peck, he’s truly got the whole package on top of being tall, dark and handsome!). I REALLY hope this will bring more Hollywood roles for him. Come on, more casting agents ought to see BBC’s North & South already. Mr. Thornton FTW! Sorry, I just have to get that out of the way… 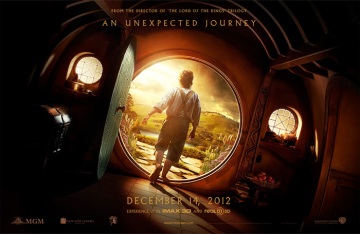 The rest of the ensemble cast is nothing short of phenomenal as well, on top of the original LOTR cast like Cate Blanchett, Ian McKellen, Hugo Weaving, Andy Serkis, etc. I’m thrilled to see Lee Pace, Benedict Cumberbatch, Luke Evans and of course Martin Freeman as young Bilbo Baggins. By the time the Howard Shore score comes on, I’ve got goosebumps all over again, I’m so ready to be transported to Middle Earth right about now!

Man oh man, there’s too much cinematic excitement this week I could spontaneously com-bust! I’m still recovering from the awesomeness of The Dark Knight Rises, and now this! My pal Terrence @ ScarletSp1der just had a mind-boggling poll asking us to do the impossible… that is to choose between Batman 3 or The Hobbit. Oh man that’s like Sophie’s Choice. I can’t, I can’t… and I won’t! I am excited for both equally despite those being two very different films. Fortunately, we don’t have to as they’re released a half a year apart!

With 2011 coming to a close, surely more trailers are to come as studios are hoping to build up the hype for their 2012 movies. Now, as a film lover, the contrasting emotion of agony & ecstasy of anticipating movies can be unbearable! With every joy we get of seeing a movie trailer/clip/featurette what have you, it’s always followed by the agony of waiting for its release! I mean, I’m already complaining about the 7-month wait for The Dark Knight Rises but The Hobbit won’t be out until next December 2013, a stinkin’ FULL YEAR from now!! Oh Mr. Jackson, the agony….

And that’s just two of them, there are a whole slew of movies I’m anticipating next year, here are just a shortlist I can think of right now (release date is for USA).

Not including other ones which release dates haven’t been announced yet such as All Things to All Men and two of Gerry Butler’s sports-themed movies Of Men and Mavericks and Playing the Field. As you can see, the earliest movie to be released on the list is The Avengers, and that’s almost a half a year wait.

As I’ve just seen The Artist, it makes me think people’s attitude about upcoming movies back in the day in the pre-Internet and social media era, before movie marketing constantly bombards us the way they do today. I mean, the average moviegoers probably didn’t know a movie was coming out until like  a month before. The only ‘hype’ the movie’s got is only through newspapers, radio and occasional TV spots. Back then going to the movies were such big events, people got dressed up and line up to see the new marquee film playing in their local theater, waiting to ‘escape’ into the world of the movies, forgetting their troubles for a couple of hours. Unless they’re the film critics, I bet they weren’t picking apart each scene or fuming that so and so sequence they saw on the trailer wasn’t included, etc. Today, we often come with certain preconceived expectations about a given movie long before the opening credits roll, so for better for worse, our experience of movie-watching is undoubtedly very different.

Anyway, that’s just an observation I just want to share with you. I guess it’s up to us to keep our excitement and anticipation in check, which is getting harder to do given the increasing ferocity of social media marketing. The studios certainly are making the most of ’em as my Twitter feed is abuzz with film updates almost every minute!!

What are your thoughts on this topic, folks? And while you’re at it, what are the top five films you’re anticipating next year?

43 thoughts on “Random Thoughts: The agony & ecstasy of [film-release] anticipation”