If there’s ever a competition for most clichés piled up in one movie, Battle Los Angeles is the clear winner.

The film is about a group of soldiers battle against the faceless, I mean that literally, alien invaders who are destroying every major city in the world. Marine Staff Sergeant Nantz (Aaron Eckhart), who was about to retire, got reassigned to a new platoon which mission is to go rescue some civilians trapped at a police station within the alien territory. They have three hours to complete the mission before the area is blown to pieces by the Air Force. It’s part Black Hawk Down, part Independence Day (ID4). But the main difference is, Black Hawk Down was a very good film and ID4 was a lot of fun. Battle: LA on the other hand was neither… it’s actually painful to sit through. It’s full of laughable dialogue and took itself way too seriously.

When the film opened in theater back in March of this year, it received tons of bad reviews and I thought maybe the critics were expecting too much out of it. I decided the rent it and thought I’d probably enjoy the non-stop action sequences and that’s all I was hoping for. Boy was I wrong. Not only was the film so badly-written, but it’s chock full of clichés from other films that I could accurately predict what would happen next. For example, there’s a scene in the film where a soldier thought he killed an alien and decided to walk towards it and a second later, the alien jumped back alive. I thought to myself, ‘seriously, the filmmakers thought THAT was clever?’ It’s been done so many times in other films with far better results. In every alien invasion films, there must be a scene where the human gets to dissect the alien to find out how to kill it. What do you know, we see that exact scene in this film. Of course they need to have some sort of a doctor who can assist our soldiers on how to dissect the alien. As it turns out, one of the civilians happens to be a veterinarian and offered her professional opinion on how to kill the damn aliens.

Believe it or not, the clichés are not the only awful thing in this film. It’s also badly-directed by Jonathan Liebesman, who was responsible for the awful remake of Texas Chainsaw Massacre. Liebesman and his cinematographer decided to make the audience dizzy by not holding the camera steady for more than two seconds long. Seriously, I almost turn off the movie after 30 minutes in because I felt nauseous from the constant hand-held shaky cam! I understand he wanted the audience to be part of the action. But if that technique is making the viewers sick, how’s that supposed to be a good thing?

The main reason I wanted to see this film was for the big action set pieces but unfortunately, Liebesman failed on that front, too. I couldn’t tell what the heck was going on during the battle sequences. Again, if he and his cinematographer would hold the camera still for like ONE minute, it would have been at least cool to see the action.

As you can tell, I despise this movie, the only good thing about it is the Blu-ray disc is quite stunning visually and the lossless surround sound is top notch. If you want to show off your home theater system, this is one of the movies to do so. Otherwise, it’s a waste of your time and money. Only give it a rent if want to see how good the disc look and sound.

Cowboys & Aliens was my most anticipated film this summer. Unfortunately, it turns out to be quite a letdown when I finally saw it a week ago. The film got a lot of negative reviews when it opened back in July 29th but I didn’t read any of them since I really wanted to see it. Well, after I saw it and then I read the reviews, I realize most of the critics were right. It’s definitely one of the most disappointing summer flicks I’ve ever seen since X-Men Origins: Wolverine back in 2009.

The film opened with a man (Daniel Craig) waking up in a desert. He has no memory of who he is or where he came from. He also has mysterious metal bracelet around his left arm. Then he met three bounty hunters whom he dispatched with no problems whatsoever. With introduction like this, we know this stranger is a dangerous man.

He then makes his way to a town called Absolution, where we’re introduced to a few more characters, including Colonel Dolarhyde (Harrison Ford), local bar owner Doc (Sam Rockwell), the sheriff (Keith Carradine), a mysterious woman name Ella (Olivia Wilde) and Dolarhyde’s son Percy (Paul Dano). Just few minutes after the stranger arrived in town, we found out that he’s wanted man and his name is Jake Lonergan. That’s the basic set up of the film. But before long, alien space ships started showing up, blowing up the town and snatching people up into their ships. So Lonergan and Dolarhyde decided to team up and rescue the town’s people. In the meantime, Jake keeps having flashbacks of what happened to him, very similar to the Jason Bourne films. The film has no plot and for the rest of the run time.

I actually enjoyed the first half hour of this film, but after the aliens showed up, it went downhill from there. I didn’t really care for any of the characters and while the action sequences were well-done, it’s something we’ve all seen before in other sci-fi action flicks. For a film that cost $160mil to make, I thought the production design looked cheap and the scope of the film were quite small. I expected to see more alien space ships flying around attacking the cowboys but it never happened. I was also surprised how many cliché scenes were in the film, whatever you think will happen in the next scene, it happened. There were 8 writers, I say again, eight writers credited in this film. Obviously the script went through several revisions before they started shooting but I couldn’t stop thinking to myself, eight writers and this is the best they could come up with? 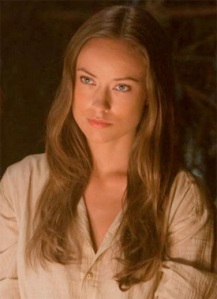 Director Jon Favreau did a good job paying homage to some of the great westerns from the past including The Man with No Name Trilogy, Once Upon the Time in the West, The Searchers and The Outlaw Josey Wales. Unfortunately, with a weak script, there’s not much he could do except adding one clichéd scenes after another. Performance wise, Daniel Craig and Harrison Ford are pretty good in their respective roles. It’s too bad Sam Rockwell and Olivia Wilde don’t have much to do but being part of the gang. Rockwell is the comic relief and Wilde is the love interest of Craig’s character.

Now, I don’t hate this film as much as the other alien invasion film that came out earlier this year, Battle: LA (as you can see in my review above). But this one sure is a big disappointment to me. With a great cast like this and a decent director, I thought for sure the film would’ve been a fun Summer ride, not one that’s full of boring dialogue and by-the-number action set pieces. One critic pointed out that had the film been more of a comedy in the vein of Men In Black, it would’ve worked better. I tend to agree with that sentiment. Maybe a straight up western/sci-fi just doesn’t work, especially with a weak script like this one.

Perhaps another reason why I didn’t like this film as much was because I saw it at a AMC digital theater where they didn’t remove the 3D lens. The picture looked dim and flat, during the night scenes I couldn’t make out what the heck was going on. So be warned, if you’re going to see this movie at your local AMC, make sure you see it in the non digital theater. If you don’t know what I’m talking about, please read this article. It’s another reason why I hate 3D, it’s ruining our movie going experience.

Well have you seen either one of these movies, yet? If so, did you like ’em or were you disappointed as much as I was?