A few weeks ago I posted some concept art on Disney/Pixar’s BRAVE. Well, now Disney and Pixar has revealed the teaser poster. LOVE it!! 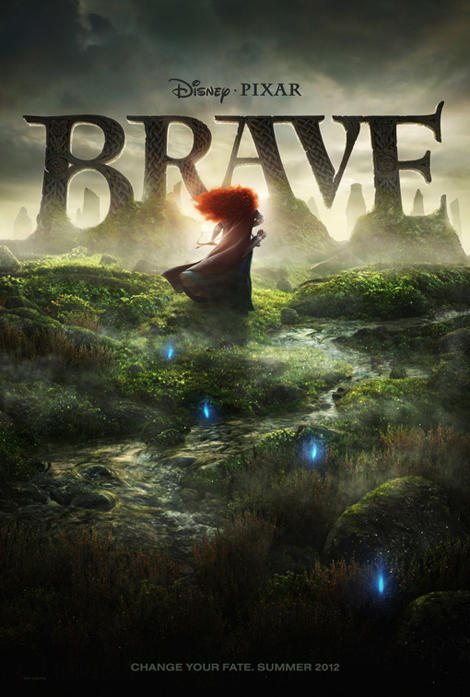 And now we’ve got a teaser trailer, wahoo! I LOVE every minute of it, I’ve watched it three times this morning already 😀 I love the Scottish accent of the narrator, I can’t tell whose it is though, I want to say it’s Craig Ferguson but it could also be Kevin McKidd? Anyway, check it out below:

Brave is set in the mystical Scottish Highlands, where Merida is the princess of a kingdom ruled by King Fergus (Billy Connolly) and Queen Elinor (Emma Thompson). An unruly daughter and an accomplished archer, Merida one day defies a sacred custom of the land and inadvertently brings turmoil to the kingdom. In an attempt to set things right, Merida seeks out an eccentric old Wise Woman (Julie Walters) and is granted an ill-fated wish. Also figuring into Merida’s quest — and serving as comic relief — are the kingdom’s three lords: the enormous Lord MacGuffin (Kevin McKidd), the surly Lord Macintosh (Craig Ferguson), and the disagreeable Lord Dingwall (Robbie Coltrane).

Pixar’s 13th feature film will not only have its first female heroine, it’s also it’s first fairy tale fantasy (check out my review). Oh, and it’s also the first Pixar animated feature with a darker theme, here’s what director Mark Andrew told EW InsideMovies “What we want to get across [with the teaser] is that this story has some darker elements… Not to frighten off our Pixar fans — we’ll still have all the comedy and the great characters. But we get a little bit more intense here.” The mystical looking stones in the background also have some significance according to producer Katherine Sarafian, she’s quoted in the same article as saying that “Those stones are actually a pretty important set in the film… We can’t say what happens there, but they were inspired by an actual location in Scotland that we visited multiple times during our research. It was a very powerful setting for the kind of things we want to have happen in the story.” Oooh, all of this tidbit just amped my excitement tenfold! I’ve always been fascinated by Scottish culture [er… and Scottish men, ahah] and it’s one of those places in the world I still dream of visiting.

So in honor of Scottish Princess Mérida, here’s a look at some awesome vintage Disney ‘Princesses’… Snow White, Princess Aurora, Cinderella, Belle, and Ariel. My favorite of all is Sleeping Beauty… it’s my all time favorite Disney’s fairy tale feature because of the absolutely magnificent visuals, the wonderful Tchaikovsky’s music, and of course, the most elegant Disney villain, Maleficent.

So are you excited for BRAVE? And which one of Disney’s fairy tales is your favorite?