If one were to Google “scene-stealing performance,” Judy Greer should appear as the first page of hits. Born and raised in the Detroit area, she’s been working steadily since the late 1990s. She gets the odd dramatic role here and there (The Village, What Women Want) and has worked a fair amount in television (Arrested Development, Archer, and Mad Love, which looks to be headed for cancellation). 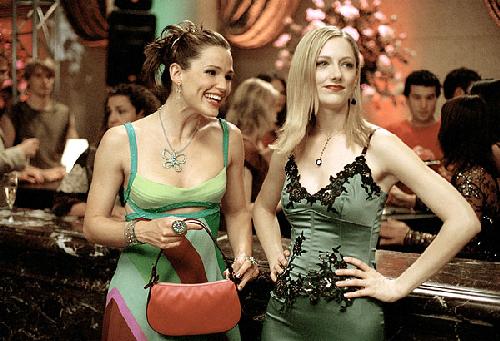 But mostly she utilizes her talents to grab your attention in light comedy movies. It’s a definite talent, one that few have to this degree. Perennially cast in the best friend or supporting character role, she takes that type and makes it riveting. She brings a needed acerbity to rom-com fare like 27 Dresses (in which she co-starred with the perennially under-appreciated James Marsden). She has the distinction of being the only watchable thing in The Wedding Planner. She apparently also portrays the best friend in Love and Other Drugs, which I have not yet seen.

However, I’d like to give her props for her work in one of my all-time favorites, 13 Going On 30. Yes, this is a deeply cheesy movie, and the formula of the younger person trapped in an older body has been many times before. But somehow this one is fresh, and I think Greer is part of why. Jennifer Garner captures Jenna’s 13-year-old mannerisms and speech patterns perfectly, but Greer, as her grown-up best frenemy Lucy, is excellent. With line delivery ranging from deadpan (“You’re pregnant”) to sarcastic (“Oh no, not his thingy”) to snappy (“Jenna, if you’re gonna start lying about your age, I’d go with 27”), sometimes within the same scene, she commits cinematic larceny just about every time she appears. She also manages to make shallow, two-faced Lucy funny and very nearly likable until the very end. What could have been more of cardboard cutout becomes a very real person, similar to someone you probably know…especially if you’ve attended high school.

I don’t know if she’ll ever become a household name or carry a big action picture, or if she even wants to. I do know that I am interested to see the three projects Greer has in the can for 2011 and 2012: The Descendants, directed by Alexander Payne, starring George Clooney, due out December 2011; and two in post-production: Jeff Who Lives At Home, with Ed Helms and Jason Segel, and Playing The Field, with Gerard Butler and Jessica Biel.

What do you think of Judy Greer? Do you think she’s leading lady material?