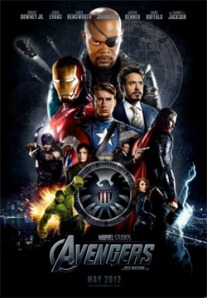 Hope everyone’s had a lovely weekend. I definitely enjoyed my 3-day weekend though it sure went by real fast. I took a much-needed break from my computer which including blogging and reading other people’s blogs, though I had planned on seeing more movies but only managed to see two of them. One of them is a repeat as one of my good friends hadn’t seen THOR and since we quite enjoyed it the first time around, we saw it again but in 2D (which looks just as good as the 3D one). I still like it the second time around, and I absolutely LOVE the music. In fact the soundtrack is playing right as I’m writing this. After seeing the post-credit scene, I’m excited (mostly out of sheer curiosity) to see The Avengers! Check out this fan-art poster already circulating online, I think it’s a pretty decent Photoshop job.

The other movie I saw was The Way Back. I posted the poster and trailer last year and remember being really intrigued by the story, which was inspired by real events. I’ll get to my short review in a moment but first let me just make a couple of announcements. My good pal and fellow cinephile Paula G. has joined FC as a regular contributor! Please extend your warm welcome to Paula and visit her own page on FC to find out a bit more about her. As always, you can visit each FC contributor’s page by clicking the Contributors tab at the top of the homepage. I’m so excited to have her on board as she’ll introduce a new blog series as well as reviews of various movies.

The second announcement is that the highly addictive and fun Anomalous Material’s Hollywood Fantasy Draft has begun, this time in its third installment! Last week, I spent a few hours drafting my cast for my next movie pitch along with other fine movie bloggers, click on the link to see which actors/directors we’ve selected for our fantasy movie. Look for my dream cast post this week ahead of the actual pitch itself that will go up next Monday, June 6.

Now, on to the review…

This Peter Weir film is inspired by real events, loosely based on The Long Walk written by a Polish POW in the Soviet Gulag (labor prison camp). The film tells the story of about a half dozen men who escaped the Siberian prison in 1941.

But the escape itself was just the beginning, the much more grueling task is ahead of them as they’d have to find a refuge in a land that’s not yet conquered by the Communist regime. That means covering 4000 miles of treacherous trek that includes the Gobi desert and the Himalayas mountain on foot! If you’re doing a marathon or triathlon this Summer, you might want to watch this film for inspiration… whatever journey you think seem impossible to conquer will undoubtedly pale in comparison to even half of what these people had to go through. Check out the map of their journey from Google map. Seems too good to be true, isn’t it? Well, again it’s said it’s inspired by true events, so we don’t really know what the actual length of the walk really happened.

The time in the prison itself felt rather fast, perhaps even a bit rushed. Presumably because the filmmaker would rather focus on the harrowing journey, which naturally is the heart of the film. The small band of escapees are led by a mild-mannered Polish man Janusz  (Jim Sturgess) who was accused of spying, his own wife turned him in by way of torture. In the camp, he met an American transportation engineer Mr. Smith (Ed Harris) and a tough Russian criminal (Colin Farrell), among others, who later became part of the seven-band of people who made the prison escape. Australian director Peter Weir always aimed for realism in his films, so the film looks appropriately gritty and somber. The actors speak using the accent of their characters’ nationalities, supported by subtitles, which I think is an effective way to get the audience absorbed in the environment.

The acting is really good all around, British young talent Sturgess is quite compelling as the kind-hearted Janusz, whilst Colin Farrell stole scenes in the relatively small screen time he’s in as the brutish Russian criminal who isn’t exactly a people person. It’s quite problematic when you’ve got a small band who must stick together to survive, but he later proves to be a loyal man and actually pretty funny as well, I grow fond of his character as the film progresses. Ed Harris is someone you can always rely on to provide screen gravitas in anything he’s in, and he’s perfectly cast as the weary and cynical Mr. Smith. Speaking of reliability, 17-year-old Saiorse Ronan once again impresses as a runaway girl Irena, who joins the group midway through the journey. In fact, it’s Irena who lets us in on the back story of each escapee, providing us some of the most memorable and heart-wrenching scenes. The other lesser-known actors are pretty good as well, especially Zoran, the Yugoslav accountant who provides the much-needed comic relief.

Another strength of the film is the cinematography by Russell Boyd, whose attention to detail to the overwhelmingly beautiful yet harsh scenery adds so much to the film. National Geographic Society is one of the film’s sponsors, so I guess that’s to be expected. This movie is impressive in many levels, but in the end, I didn’t find it as engaging as the previous Peter Weir’s film I saw, Master and Commander (view trailer). Don’t get me wrong, I’d still give this one high marks, I’m just surprised I wasn’t as emotionally-invested in the characters as I thought I would considering what they had gone through. Nonetheless, it’s a worthy survival tale that paints a convincing narration about human endurance.

Any thoughts about the movies I mentioned above?  What movie(s) did you get to see this weekend?

47 thoughts on “Weekend Roundup and The Way Back review”