Welcome to Part II of the list. As I said in the intro of Part I, this post is a collaboration with my Twitter pal and fellow period drama enthusiast Paula G. Now here are the other seven great romantic heroes that make us swoon, and please vote for your fave at the end of the post! 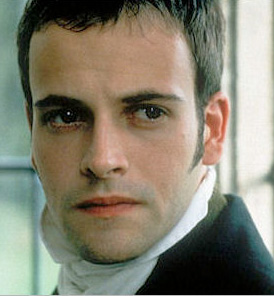 Paula – The Edmund I thought of first is Jonny Lee Miller in the 1999 production, but the character is not one of my favorites. I find him to be the most solemn of Austen’s male main characters and a bit of a hypocrite. The impression I get from the book is that he only gets together with Fanny Price because every other girl around has been shown to be completely immoral. Things aren’t much better in the film…I remember Sir Thomas ripping her down for not marrying ne’er-do-well Henry Crawford…and Edmund sitting there reading a book. She looks to him for help, but he just shrugs and goes back to reading.

Ruth – Edmund may not be fashionable like Darcy, but I picked him because he’s a naturally compassionate person, right from the start he befriended the poor and lonely Fanny Price. Yes perhaps there are times I wish he would stand by Fanny more, but still, he’s the only person in the Bertram’s household who truly loves and respects Fanny for who she is, even if he’s slow to admits that he is actually in love with her.

Most romantic scene: When Edmund and Fanny rides together in a carriage from her parents’ house back to Mansfield Park. They’ve missed each other so much but neither could express their feelings. One time their hands touch lightly and Edmund slowly envelopes hers with his… Fanny’s expression of inner tumult is priceless.
… 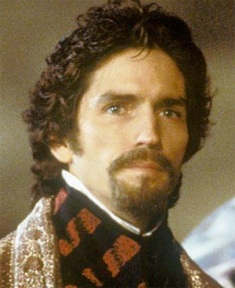 Ruth – Paula told me the only time she saw this movie was to look for Henry Cavill. I don’t blame her, Henry is one gorgeous creature even from such a young age. But it’s James Caviezel as the main protagonist whom I fell for when I saw this movie years ago. What Edmond goes through in this Alexandre Dumas’ story is heart-wrenching… the merchant sailor who’s about to marry his fiancée Mercédès but is betrayed by his friend Fernand, which sends him to prison for 13 years.

Yes, Monte Cristo is more of a revenge tale, but I feel that Edmond’s undying love for Mercédès deserves a place on the list. The moments of them frolicking on the beach in the opening scenes is definitely romantic. I also love the part when she recognizes him when he starts twirling his hair at his lavish party and then she shows him the rope ring he once gave him… it’s a beautiful and touching scene. Caviezel has such a regal presence as a count, especially the moment Edmond emerges from the hot air balloon with his cape flowing about in the wind…    b
…

Paula – I fell hard for Hugh Grant’s big blue eyes, floppy hair and cute stammer in this role. i just remember the heartbreaking and sometimes funny awkwardness between he and Elinor throughout the film, particularly in the scene where Elinor plays hostess to Lucy Steele and Edward pops in to say “hi.” Everyone present knows what’s going on and no one can talk about it. Edward and Elinor are so perfect for each other but everyone & everything gets in the way until the very last. Most romantic scene: Any scene in which Edward helps Elinor with Margaret… he yanks Elinor around quite a bit but it seems like he’s got to be a good guy deep down.

Ruth – I love the character of Edward more so than the actor who portrays him, but I agree with Paula that Grant’s awkwardness with his signature stammering manner is quite endearing. But when I saw the 2008 BBC adaptation, I became quite smitten with Dan Stevens’ portrayal. He plays Edward with more confidence and playfulness but still has the warmhearted affection towards Elinor. I adore the ‘beating carpet’ scene where they first met and his longing look when the Dashwood family moves to the cottage. But the juiciest scene has got to be the chopping-wood-whilst-soaking-wet-in-the-rain scene and Elinor comes to visit him. “I enjoy a bit of a sweat. A man can relieve his feelings…” he says. Well I’m sure Elinor quite enjoyed, um, watching him, too 😀
… 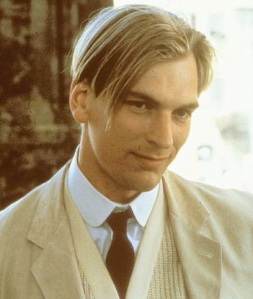 Paula – A rebel and a sweetheart, unconventional George sweeps uptight Lucy off her feet. Again, we see a couple who are perfect for each other but not completely sanctioned by society. Most romantic scene: George and Lucy run across each other in a field in Italy and… well, that kissing scene is certainly one of the movie’s most memorable moments.

Ruth – Well, I haven’t read the E.M. Forsters’ novel the movie’s based on but I presume George is a whole lot more interesting than the way Julian Sands portrayed him in the movie. As I said in my review, I actually thought he just isn’t compelling enough in the role (sorry Paula!), it’s Daniel Day-Lewis as the goody two-shoes Cecil who steals the show.
… 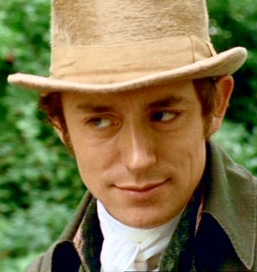 Paula – My favorite portrayal is by JJ Feild [sic] in the 2007 ITV version. He and Felicity Jones have so much chemistry that seemingly straightforward dialogue is rendered suggestive by the way they look at each other. The novel is generally considered to be one of Jane Austen’s “lesser works” — can there be such a thing? — because it was written first and isn’t as polished as, say, Pride & Prejudice. And the author herself admits that Catherine Morland is no heroine. But it’s still really fun. Most romantic scene: Henry shows up at the Morland house and asks if Catherine can show him the way to the Allens’ — which is within sight.

Ruth – I only saw bits and pieces of this adaptation but Feild seems to have that mischievous nature that makes him fun to watch. I’m not as intrigued by the story compared to other Austen’s literary works though.
… – 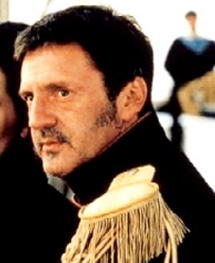 Paula – He’s a handsome man of action who loves his wife enough to let her try to rehabilitate a murderer. In their house! Public scorn means nothing, as long as his wife is happy. Unfortunately for all concerned, going against the established norm has consequences, but throughout, Daniel Auteuil makes devotion sexy. The film is based on actual events on Saint-Pierre-et-Miquelon, the French islands off the coast of northeastern Canada. If you haven’t seen it yet, I highly recommend it.

Most romantic scene: Before all hell breaks loose, the Captain & his wife only have eyes for each other at a stuffy tea party.
…

Paula – Hardy once said on a talk show that he’s the go-to guy for “nutters” and although he has played his share, there’s no better example than his Heathcliff, just for sheer adherence to the book. I’ve always found the character repellent and Hardy is appropriately psychopathic for a guy who kills his wife’s dog. But somehow he makes you feel some sympathy for him, which is more than anyone else has ever done. I don’t know when Hardy got together with Charlotte Riley, who plays Cathy so excellently, but it wouldn’t surprise me if it happened on this set.

Ruth – Romantic heroes doesn’t get any more dark and brooding like Heathcliff, and which the term crazy love is absolutely fitting. It’s even harder to root for Emily Brontë’s hero as he makes even her sister Charlotte’s Rochester seems like a levelheaded guy! I have only seen the Timothy Dalton’s version so I can’t say his is my favorite rendition, but he certainly conveyed the all-consuming passion Heathcliff has towards Cathy, it proves that ‘to die for love’ that’s romanticized by lovestruck individuals aren’t always beautiful, they can be haunting and down right tragic. Still, it’s the stuff classic romance are made of. I’m still looking forward to Laurence Olivier’s and Ralph Fiennes’ version as I’m not too keen on the actress who plays Cathy in the 1970 adaptation. Most romantic scene: When Heathcliff is reunited with Cathy again after running off for several years and the two are making out on the grass, professing their love to each other even though Cathy’s now married to someone else.
…

We hope you’ve enjoyed the list, now please take the time to vote for your favorite period drama hero, you can also enter one that’s not on our list. Do you agree with our picks? If not, let it be heard in the comments.