I saw this on day 4 of the film festival last week. There aren’t a lot of movies with strong female roles in Hollywood, so it’s nice that three out of four of the studio films at TCFF feature characters based on real-life strong women in a male-dominated arena. Secretariat is more than just a horse race movie, the heart of the movie is its owner Penny Chenery, and Fair Game‘s true heroine Valerie Plame is a CIA spy — it doesn’t get any more feisty than that. Fair Game review forthcoming. 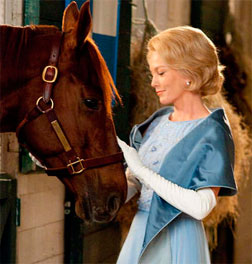 Before I saw this movie I had never heard of a horse named Secretariat and its legacy. But I was up for a feel-good, rousing movie and that’s exactly what I got and more. In fact, I was quite moved by the story of Penny Chenery, an ordinary housewife who ends up taking over her ailing father’s Meadow Stables in Virginia, despite her lack of experience with horse-racing business. Apparently the name came courtesy of the Stables’ secretary, Elizabeth Ham, who was had submitted 10 names to the Jockey Club, all of which were denied for various reasons [per Wikipedia]. Heh, I wonder what the other 10 were if this was considered a winning name??

I haven’t seen Diane Lane play such a ‘button-up’ role, I initially thought this is a rather unusual role for her, I guess she’s known for her sensual presence on screen. But you know what, she delivered a believable and affecting performance as Penny. In fact, this movie focuses as much on her as it does on the Triple Crown winner, and does it in a captivating way that I wasn’t at all bored during the almost 2-hr running time.

It’s nice to see John Malkovich playing a somewhat ‘normal’ character, but of course he retains his signature quirkiness, which is what makes him so watchable. He plays the French Canadian veteran horse trainer Lucien Laurin who’s dressed like Superfly, quite possibly the zaniest-dressed horse trainer there ever was. I hope he didn’t design those himself (in case you didn’t know, Malkovich has his own fashion label) There’s a funny scene where Miss Ham commented about how much he paid for his hat, both characters are quite the comic relief here.

The action shots of the horse races are fun to watch, I found myself cheering for Secretariat as if I was right there watching him on the Kentucky Derby racetrack. The grand finale of the race at Belmont Stakes is particularly memorable and made me want to stand up and cheer. The gospel-style music also helps set the mood though I’m not quite sure what the connection of that and the occasional Bible references are to the story. The heart-stirring scene of the large chestnut colt being born was also one of the highlights, no shortage of beauty shots of the super horse, that’s for sure. 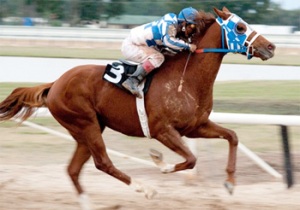 Directed by Randall Wallace, who’s best known as the writer of Braveheart, he only had 3 directing credits in his career. One of which is The Man in The Iron Mask, another personal favorite of mine. I thoroughly enjoyed this movie, it’s right up there with the underdog football movie Rudy and the similarly-themed Seabiscuit.

I highly recommend this to everyone of all ages, whether or not horse race is your thing.

Have you seen this movie? What did you think?