Happy Wednesday, folks! Hope your weekend was a good one. Well, mine was hectic to say the least, part of the weekend I was working on my fantasy movie pitch, speaking of which, have you read it yet?

Well, Clooney is box office king this weekend with The American. I didn’t see it though, I finally saw The Expendables. But just barely ten minutes in, I wish I had bought the ticket to that one instead. After the movie, half my friends who went to see The American while some of us saw the Stallone movie said that they didn’t like it, either. They said it was downright boring and the story is ‘pointless.’ One of them said he nearly fell asleep until the steamy sex scene appeared on screen, ha!

Anyhoo, I also managed to see two other movies this weekend. Instead of posting a full review of each of them, let me just jot down my thoughts on each of them in one post. (Beware, it might contain some spoilers) 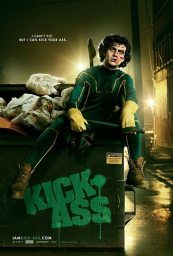 Plot: Dave Lizewski is an unnoticed high school student and comic book fan who one day decides to become a super-hero, even though he has no powers, training or meaningful reason to do so.

I admit I was excited to see it as we both have been curious given the rave reviews. Thankfully, we weren’t disappointed! I thoroughly enjoyed it, despite being far more violent than I thought, and most of the brutal scenes were involved Chloe Moretz who’s a mere 13 years old!!

From the get-go, this movie grabbed my attention. Both of us were very impressed by Aaron Johnson’s performance as the high school comic book geek, and was floored to learn that he’s from England! The movie is funny throughout, and watching this scrawny looking kid trying to be a superhero is endearing, I mean the idea might be ill-conceived but he definitely has a good intention. But the story turns out to be engaging and the action sequences well, kicked ass!

Nic Cage was pretty darn good (a nice change after all the atrocious stuff he’s been involved in) as Big Daddy, an ex-police officer turned secret mercenary superhero who lives with her young daughter Mindy, known as Hit Girl (Moretz). Moretz is quite the scene stealer here, upstaging both Johnson and Cage in a lot of scenes. Mark Strong was playing his usual villain role with panache, and this time with a hint of New York accent?In any case, he’s always good in a role like this, not to mention he gets the best death scene in the movie (like in Robin Hood), but I gotta admit I’d love to see him be a good guy for once.

The real revelation here for me is the 20-year old Aaron Johnson. His American accent was so flawless I would never know he’s not from here, but I guess I shouldn’t be surprised that once again the actor I fancy happens to be a Brit 🙂 He looks so perfectly nerdy but when I Googled to find out more about him, dorky isn’t what I’d use to describe him at all, in fact, quite the opposite! Then I realized I did read about him playing John Lennon in Nowhere Boy. Looks like we have another versatile young British thespian here, no wonder Andrew from Encore Entertainment thought of him as being a noteworthy young star under 30. I’d have included him had I seen Kick-Ass at the time.

In any case, I’m even more excited about Matthew Vaughn directing X-Men: First Class now, he’s got a knack for stylized actions sequences, as well as ear for a witty dialogue. I was quite impressed with another movie of his, the fantasy adventure Stardust, so hopefully he’ll continue to get more work in Hollywood! 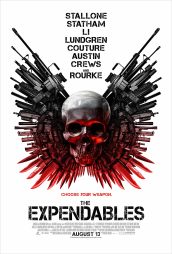 Plot: A group of elite mercenaries, the Expendables, are deployed to the Gulf of Aden off the coast of Somalia to halt local pirates from executing the hostages.

Well, I’m not going to say a lot about this one as I don’t even want to think about it. If you read this blog long enough you know I’ve been anticipating this movie ever since I heard about it a year ago. I went in undeterred by the critics and with a low expectation, I mean, with this cast of 80s action stars AND Arnold’s cameo, it’ll be a helluva entertainment, right? Wrong! I came thisclose to leaving the theater even after 15 minutes, which I never experienced before.

I should’ve listened to my friend and guest blogger Ted who said this movie is bloody awful. I don’t expect Shakespeare obviously, but does the dialog have to be THAT terrible? And the action sequences, the saving grace we all hope for, was pretty dismal, too. Despite being all brutal and gory, as to be expected, it just looks cheaply made, not too mention old-fashioned. I mean I get the ‘vintage’ vibe is deliberate, but I didn’t think the action stuff have to look like they’re done 3-4 decades ago.

Believe it or not though, the girls in the movie (there are only two of them) actually fare WORSE than the boys, especially Charisma Carpenter (definitely didn’t live up to her first name as she had none at all). I mean, goodness me, her scenes with Jason Statham made him look like an Oscar contender. I understand that “the appeal of Charisma Carpenter isn’t her acting!” as Andy from Fandango Groovers put it, but come on!

I mean it really is, folks, there is absolutely nothing I could praise about this movie. Sure, the “He wants to be president” line from Sly to Arnold’s character did draw a lot of laughs, but if that is all there is to it, I could’ve just waited for the dvd… or better yet, watch it on YouTube. I thought that at the very least, despite plot holes bigger than Steve Austin’s biceps, I still might get a good comedy out of this, y’know like the A-Team. To be fair though, I did like Mickey Rourke’s character, but maybe because he doesn’t seem to take this role seriously and at least I can understand every single word he is saying, unlike y’know, the leading actor!

The definition of expendable |ikˈspendəbəl| – (of an object) designed to be used only once and then abandoned or destroyed. If only Stallone would treat this movie like that definition, alas, with Expendables 2 in the works, we haven’t seen the end of this, yet 😦

Plot: In 1930s, Depression era New Jersey, a movie character walks off the screen and into the real world.

After watching two action-packed movies, I was ready to unwind with something much more mellow. This movie came highly recommended by my friend Prairiegirl as well as Peter from Magic Lantern film blog. Well, thanks to both of them that I came across this gem as it’s an utterly delightful film! I’m not exactly a Woody Allen fan, and considering how dark the themes of his movies of late (Match Point, Cassandra’s Dream), I was surprised at how ‘innocent’ this one is.

It mixes the world of fantasy and reality so seamlessly that as the audience I was swept away by the surreal world of Mia Farrow’s character Cecilia. I mean, who hasn’t dreamed about meeting their favorite character in a movie, don’t we all wish sometimes the person we’re so in love with could just, well, leap off from the screen and actually talk to you? I’m a bit of a dreamer myself, and though I don’t necessarily find solace from the world of the movies, there are times that a scene or character I’m seeing is so bewitching I wish I could be a part of it.

This is the first time I’ve seen a Mia Farrow movie, but she is definitely perfect as the down-on-her-luck waitress who’s disillusioned on her marriage and living in poverty. But the star of the movie is Jeff Daniels, playing two characters—well one essentially, the actor (Gil Shepherd) and the screen persona(Tom Baxter)—but they’re totally different characters. He projects such warmth and wholesome hunky-ness that’s so endearing. That scene in the bordello is just priceless!

The romance is just endearing and lovely, and even in the short running time (about 1.5 hour), I was immersed in the characters and really wanting to see Cecillia find happiness. The dialogue is a real treat, too, especially between Cecilia and Tom Baxter, no wonder Allen was nominated for Best Original Screenplay at the 1985 Oscar. I’m kind of glad that Woody himself is nowhere to be found in this movie, no offense to him, but I think he’d kind of be a distraction in this movie

I wish the ending had been more of a happy ending… oh how I wish Gil hadn’t left for Hollywood. But oh well, I guess reality bites… there is no Prince Charming to rescue us like the movies want us to believe.

So folks, what movies did you see this weekend? Or if you have any thoughts about any of these movies, let’s hear ’em!