As you probably know, I’m a sucker for movie trivia. I love reading tidbits about casting and behind-the-scenes stuff about film productions. I’m not talking about gossips about which actors are hooking up with who, now that’s TMZ territory I don’t care for. What intrigues me is the journey how certain flicks go from vision to the actual version released in theaters. It shouldn’t come as a surprise that for most films, the finished piece has been greatly altered from its original vision and the drama that go on in the making-of process is likely far more convoluted than whatever is going on in the movie itself!

Well, in the next few weeks, FlixChatter will be featuring guest posts from my colleague and fellow movie buff Ted Saydalavong, who’s like a walking encyclopedia on behind-the-scenes trivia! As this week is dedicated to Christopher Nolan’s Inception, why not start with my favorite of Nolan’s work. So here is a cliff notes version of the Batman Begins‘ history.

After the Batman & Robin debacle, Warner Bros. wanted to reboot their most lucrative franchise and so they went out and hired a lot of writers and directors to see who can come up with the most creative ideas to restart the franchise.

First they decided to adapt the animated cartoon Batman Beyond for the big screen. This version takes place in the future where Bruce Wayne is an old man and he’s training a young protégé to be the new Batman. In fact Clint Eastwood was asked if he’s willing to play the old Bruce Wayne/Batman, he said he would if he’s was younger. I believe around this time Eastwood was well into his 70s and he said he didn’t want to run around and kicking ass at that age. A little tidbit, Nolan actually asked Eastwood if he wants to be in Batman Begins and The Dark Knight, he was supposed to play the commissioner in Begins and the mayor in TDK. He couldn’t do it because he was busy filming his own movies, but he said if Nolan asked him again to be in the new Batman flick, he’d make time. So expect to see Eastwood in the next Batman film. As for the young Batman to be, there were lots of actors who auditioned for the role, these include Aston Kutcher, Joshua Jackson and Jake Gyllenhaal just to name a few.

After they read the screenplay from the animated show’s writers, they didn’t like what they read and decided to go another route. In came director Darren Aronofsky (Requiem for a Dream, The Wrestler), he asked Frank Miller (the man who pretty much reboot the Batman franchise in the comic books) to help him write the script. Miller wrote the first treatment based on his graphic novel Batman: Year One, also the name of the script, which you can read in full here. In this version, the setup is similar to Batman Begins: Bruce Wayne left Gotham for a few years and came back to the even more corrupted city. As the story begins we see Bruce as some kind of bum and homeless, he’s still upset about loss of his parents. This version is very low tech compare to Batman Begins, but very gritty and violent. There’s no Alfred in this version, only a mechanic whom Bruce works for and he refers to him as Big Al. Also, the main villain is the police commissioner Loeb, so no Joker, Two-Face or Scarecrow yet. 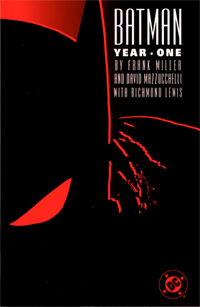 Year One is more of a detective story; the plot is really about Bruce Wayne becoming Batman while trying to accept the deaths of his parents. He does a lot detective work, trying to take down thugs, pimps and gangsters. The script also focuses Jim Gordon, in this version he is trying to take down the dirty police force by himself but as the story progresses, he gets help from Batman. As I mentioned earlier, this script is quite violent so had they made the movie, it would’ve gotten a hard R rating. Oh yeah, Miller did introduce Selina Kyle a.k.a Catwoman but she starts out as hooker who meets Bruce near the beginning of the story. He also hints a bit about bringing in The Joker, similar to what Nolan did at the end of Batman Begins.

Well, after Aronofsky and Miller finished the script, they handed it into the studio. Not surprisingly, they rejected the idea, instead they asked Aronofsky to tone down the violence and make it a more conventional storyline, such as bringing back Alfred and not make Catwoman a prostitute. Aronofsky refused and left the project.

In late 2002 early 2003, the studio hired Wolfgang Petersen (Das Boot, The Perfect Storm) to direct Batman vs. Superman since they couldn’t get either one of the superhero films off the ground separately. The script was green-lit and they begun the casting process. Christian Bale was actually close to becoming the new Man of Steel, not The Dark Knight. If I remember correctly, they wanted some unknown for Batman/Bruce Wayne role. So while Petersen was searching for the new Bruce Wayne and Clark Kent, the studio suddenly decided to shut down production. As a consolation, the studio offered Petersen a chance to direct Troy and of course he accepted.

Now, I don’t know why the studio decided to abruptly canceled Batman vs. Superman, but my guess is that by that time, Nolan had pitched his version of Batman to them and they loved it. As we all know, Nolan is now the ‘savior’ of the Batman franchise. Let’s hope the third Bat flick is as good as the first two. Rumor has it, the third film might be called The Caped Crusader. I like it, but Nolan might end up naming it The Dark Knight Returns. He’s also in charge of rebooting Superman franchise, again.

15 thoughts on “A Flix Odyssey – From Vision to Film: Batman Begins”