Hi everyone!  Another blog event is upon us movie bloggers. Mike at You Talking To Me? Blog is compiling a list of influential movies that in its wake brings about other movies trying to capitalize on its success. So the list is basically about the great movies the were trailed by a bunch of pretty bad ones that did everything short of tarnishing the original’s legacy. It’s both a celebration of great films and a condemnation of Hollywood’s tendency to repeat trends until they are utterly and hopelessly dead. There are 27 movies on this list that’d be revealed one day at a time, starting with It Happened One Night. So, be sure to visit his blog daily to check out if one of your faves made the cut.

For this blog event, I recently re-watched Gladiator again. I’ve only seen the extended dvd version twice and let me just say, this movie still blew me away as much as it did when I first saw it ten years ago. Yes, it has been over a decade since this movie was released and people are still talking about it. I’d be hard-pressed to find an article/review of a film of that genre since then without Gladiator being mentioned.

It’s hardly surprising as the famed director Ridley Scott single-handedly revived the long-dormant sword-and-sandal genre that’s been long absent for over 3 decades. This article mentioned that the flop of The Fall of the Roman Empire (1964) – despite a stellar cast of Sophia Loren, Alec Guiness and Stephen Boyd (Messala in Ben Hur) – pretty much ended Hollywood’s golden age of historical epic. It’s quite interesting that the same historical characters of Emperor Marcus Aurelius, Commodus and Lucilla brought the genre back to life. The story of Maximus Decimus Meridius, the Roman general who becomes a slave who later defies an empire, is pure fiction of course, craftily intertwined with the history of Rome.

The good: It’s no hyperbole to call Gladiator a masterpiece. It’s a visceral spectacle that offers a thrilling blend of intellect and physical strength.  Massively entertaining and memorable, it lived up to the promise of Maximus himself: “I will give them something they have never seen before.“ Oh yes, we’re definitely entertained.

What Sir Scott did is filmmaking of epic proportion, just reading the trivia on what it took to film this movie is awe-inspiring, i.e. building one third of Rome’s Collosseum in Malta to a height of 52 feet, the 2000+ extras used for the crowd scenes, and how the Germania battle scene in Bourne Woods took 20 days to complete. The result is an uncompromisingly gritty sequences as well as a convincing look that evoke the grandeur of Rome. The scene when the city of Rome greets their new emperor Commodus is breathtakingly majestic even a decade later. It’s not just the set that’s epic, the revenge-fantasy story is equally complex, combined with grand action and grand acting from everyone involved (from Crowe’s heroic portrayal, Joaquin’s deliciously sinister villainous role, to Derek Jacobi’s theatrical-tinged performance) that results in entertainment in a grand scale.

Yet, on top of being a feast for the eyes, Gladiator has plenty of heart. Even with all the pulse-racing action stuff, the movie never forgets to make the audience connect with the central character. We weep when Maximus finds his home is burned down, and we rejoice when he comes out triumphant one gladiatorial race after another. On top of that, the movie also immerses us in the complex political web brewing underneath the revenge story. All that makes for a movie that warrants repeated viewing because it’s so satisfying every single time.

Now, the bad: As with the success of any particular ‘trend,’ it no doubt launched scores of imitators wanting to capitalize on the now-embraced genre.  Alexander, King Arthur and Troy are all released in 2004, Kingdom of Heaven in 2005, the CGI-laden 300 in 2007 and the recently released Centurion, all carry the Greco-Roman mythology theme of which comparison to Gladiator is inevitable. There are also the B-movie versions: The Last Legion and In the Name of the King, as well as TV series: HBO TV miniseries Rome and the one currently playing on Starz cable network called Spartacus, Blood & Sand I’m sure there are countless others that escape me. The point is, Hollywood since realized that there is money to be made in this genre, and there’s no stopping them. 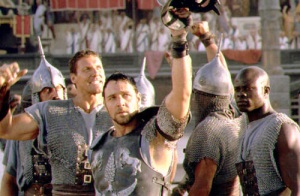 Unfortunately, none of those movies quite capture the ‘magic’ of the 2000 Oscar Best Picture winner, nor did it match its critical and box office success (Gladiator grossed nearly half a billion dollars worldwide). It’d take this entire blog to list the problems with each one, but suffice to say there is still nothing quite like the story of Maximus.

The thing with a lot of the swords & sandals movies is that they tend to be more sensational to make up for a subpar script. With the exception of the critically acclaimed Rome series (which had great characters to go with its magnificent sets), a lot of the characters in these movies are one-dimensional and lack an affecting/gripping storyline. Some of them even opt for more sensationalism and provocative scenes instead of character development, as is clearly the case in the Spartacus TV series. Think about it, there is zero sex scenes in Gladiator (we have Crowe to thank for that) and even the amount of violence isn’t overblown, it’s just enough to serve the story. The most alluring thing about Gladiator is in the script and the acting.

Additionally, the look and sound of Gladiator also spawn movies with similar visual style and music. It seems like I see a lot of movies in the past decade that use the overly muted color palettes. Then there’s the much-copied Hans Zimmer score with Lisa Gerrard’s emotive, tribal-sounding chant that felt so fresh the first time I heard it in Gladiator. The ‘Battle’ score also seems to have been imitated verbatim in the Pirates of the Caribbean franchise. My husband was playing POTC the other day and I swore I thought it was from Gladiator (you can listen both of them here) But since Zimmer himself produced the soundtrack, it’s possible he simply recycled it. 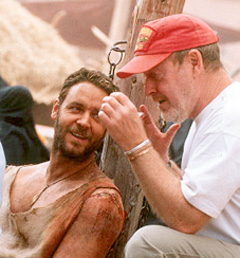 Interestingly enough, even Ridley Scott himself has been trying to capture the magic of his own epic movie. He had tried – but failed – with Kingdom of Heaven just four years after Gladiator, but then again who in the right mind ever think that Orlando Bloom could match the intensity and credibility of Russell Crowe??! And if you were going to hire someone like Edward Norton, why the heck would you cover him up from head-to-toe playing a king suffering from leprosy??

In any case, now ten years later, the dynamic duo Scott and Crowe are at it again with Robin Hood, which a lot of people have been calling the Gladiator sequel. Even the producer of the movie himself admits it, Brian Grazer is quoted in Telegraph UK calling Robin Hood “the Gladiator version of Robin Hood.”

It remains to be seen if he can even lives up to his own work.

36 thoughts on “Movies that made going to the movies suck #26: GLADIATOR”