I’ve wanted to see this when I saw the trailer early last year, but wasn’t fast enough to make it to the theater. Adapted from Noel Coward’s 1924 play, it’s a comedy that pokes fun at the stifling British upper class. Jessica Biel stars as a feisty American divorcee Larita who re-marries a young man from a wealthy family, and immediately causes a stir as soon as she arrives at his parents’ crumbling stately home. She’s surrounded by mostly British cast (always a good thing in my book): Ben Barnes as her young husband John, and Colin Firth and Kristin Scott Thomas as Barnes’ parents, the Whittakers.

I have to admit, I was baffled at first by her casting but Biel is quite a revelation here. Not only does she look really good in the retro costumes – they look flattering on her bodacious figure – but she’s also quite believable in her role. Best of all, she seemed to hold her own against the more experienced actors. She did seem a bit of an outcast at times, but in this case it’s actually a good thing as as her character is meant to feel that she didn’t belong.

I enjoy the whimsical comedy and witty banters, but as the movie progresses, I find that there’s more to the story than it seems to be. Firth’s melancholic but earnest performance adds gravitas to this movie, he plays a rather glum war vet and distant husband, increasingly weary of his nagging wife. He welcomes the new addition to the family with open arms, especially because his wife detests her. Their interaction slowly sheds a light as to who he, as well as Larita, really is. Perhaps it’s Firth who brings out the best in Biel, the great repartee between them is fun to watch.

The fairy-tale-free ending isn’t quite what expected, but in hindsight I quite like it. Larita’s old secret has been revealed, which led to her being dismissed by John, leaving her all dressed up with no one to dance with at the party.  Mr. Whittaker steps in and the two wounded souls finally come to terms with their predicaments as everyone around them watch them dance the tango together passionately and defiantly. It’s a great scene not only because I enjoy the sequence itself, but because of the significance of what their action/choices mean to them and the people inside that house.

The thing I find a bit odd is how the movie switches from comedy – laden with slapstick scenes – to a more weighty subject almost abruptly. But overall it’s still a pretty charming movie. Like Firth said in the premiere interview, “it’s a substantial movie that’s surprisingly light in tone.” That about sums it up.
…. 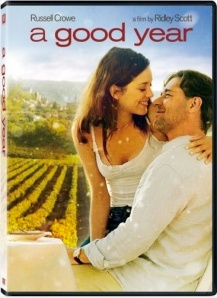 Thanks to loyal FlixChatter reader Samantha — who shares my fondness for Russell Crowe — for urging me to see this movie. This is Crowe’s second collaboration with Ridley Scott after Gladiator, but unlike the first one, A Good Year was trashed by the critics, with most of them basically lambasting him for his lack of comedic talents. Now, Sam’s theory is that it was panned seemingly for no other reason than that people were weirded out by an Aussie tough guy actor and a director known for doing intense thrillers doing a ‘soft’ movie. She might have a point there, it’s their own expectation that prevent them from enjoying the movie for what it is. I actually enjoyed it and it’s refreshing to see the gentler side of Crowe.

Maximillian may share a similar name to Maximus, but there’s no resemblance of that Roman general here. This successful investment broker Max is self-serving, ruthless, and unfeeling. In fact, all Max cares about is himself and as his best friend says, what Max Skinner does best is make money (the kind that’d give Gordon Gekko a run for his millions). He hasn’t spoken to his only surviving family member who helped raise him, uncle Henry. One day, a letter arrives informing him of his uncle’s passing and that he inherits his chateau and vineyard in Provence. Max doesn’t think much of that gift, and inclines to immediately sell it for profit.

But it’s when Max visits the vineyard to renovate the place that things take an unexpected turn. Despite his initial reluctance, eventually Max begins settling in with the leisurely life, buoyed by his fond childhood memories he shared with his uncle growing up. He also meets a beautiful woman whom he unknowingly ran over the road as he was fumbling with his phone whilst driving, played by the ravishing French beauty Marion Cottilard, whose almost as gorgeous as the picturesque French countryside. As luck would have it, Max’s lucrative job is suddenly put in limbo pending an investigation into a questionable bond transaction, so the seemingly ‘trivial’ inheritance could become a life-changing matter. To complicate matters though, a young California girl suddenly shows up at his doorstep claiming to be Henry’s illegitimate child (the radiant Abbie Cornish).

Based on a best-selling novel of the same name by Peter Mayle, Scott’s personal friend, the story speaks about making the most of life’s simplest joys. The critics bark at the unhurried pace of the movie, but that’s kind of expected given the moral of the story where the protagonist takes a break out of his high-intensity life and discover there’s more to life than monetary success. Besides, the quieter scenes give you a chance to marvel at the lush scenery —  it’s almost worth renting this movie just for the cinematography alone, which might compel you to book a trip to France pronto.

Crowe is quite charming as Max, and he’s got a nice chemistry with Cottilard. It also boast terrific supporting performances from British-Indian Archie Punjabi as Max’s saucy assistant, Tom Hollander as Max’s best bud Charlie and best of all Albert Finney as uncle Henry. I particularly liked the flashback scene with him playing tennis with the young Max (Freddie Highmore) and his wise words: “You’ll come to see that a man learns nothing from winning. The act of losing, however, can elicit great wisdom. Not least of which is, uh… how much more enjoyable it is to win. It’s inevitable to lose now and again. The trick is not to make a habit of it.”

Turns out there are quite a few good things going for this movie. It might not be Scott/Crowe’s best work, but it’s definitely worth a look.

8 thoughts on “DVD Picks: Easy Virtue and A Good Year”