A woman, accidentally caught in a dark deal, turns the tables on her captors and transforms into a merciless warrior evolved beyond human logic.

Luc Besson is a hit and miss director for me. Of his recent works, The Family was abhorrent, but The Extraordinary Adventures of Adèle Blanc-Sec has its charm, so I proceeded this one with caution. The premise of this action sci-fi is rather preposterous, but that goes with the territory with Besson.

Scarlett Johansson portrays both sides of Lucy convincingly, before and after the *transformation.* She started out as a typical wild & fun-loving college student who inadvertently got involved in some serious mess when one of his party buddies forced her to deliver a suitcase to a Korean mafioso at a hotel. Naturally she’s scared witless and utterly confused as to what the heck’s going on and you truly felt for Lucy in this scenario. When she was brutally assaulted by her captors, the powerful drug that’s sewn into her abdomen was accidentally released into her system. Well, all hell break lose as Lucy then sets out to avenge her captors. 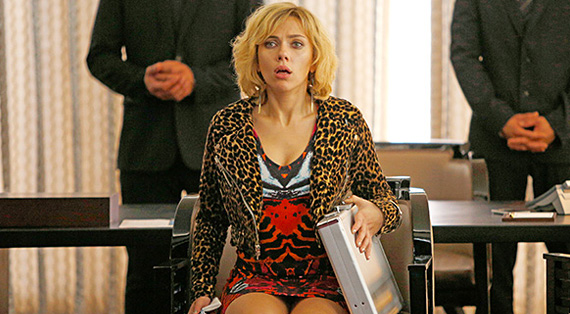 Despite the preposterous action sequences, I was quite engrossed in Lucy’s journey even as she quickly transform into some kind of a super-heroine with off-the-chart cerebral and physical prowess. If you’re familiar w/ Besson’s work, you can expect over-the-top bloody shoot-outs and of course, exhilarating car chases. It’s odd though that even though the setting is mostly in Taiwan, the villains all speak Korean.

Morgan Freeman is playing yet another wise-guy of sort, something he could do in his sleep practically but he’s still watchable even when he spent most of his time here looking perplexed. He plays Professor Norman, a well-known scientist whose research happens to be on brain’s cerebral capacity and he ends up being Lucy’s ally. Choi Min-sik is effortlessly sinister as the sadistic Korean drug kingpin. Amr Waked, whom I really liked in Salmon Fishing in The Yemen, has a small but memorable supporting role as a Parisian police captain. The star here is definitely Scarlett, she’s definitely has the charisma and star power as the protagonist. A lesser actress would’ve turned Lucy into a cyborg-like creature, but she’s still able to display a sense of vulnerability. There is an emotional moment when she calls her mother, knowing that the power of the drug will soon consume her. There’s a rumor that the role was initially offered to Besson’s ex Milla Jovovich, I doubt I’d even be interested in this if she had been in the lead.

Now, the movie attempts to be philosophical and it doesn’t quite work. I just don’t think Besson has it in him to really explore the depth of such a question about ‘the meaning of life’ and such, he’s more interested in the action. The *science* presented here is absurd, but hey, it’s science fiction after all, the logic-defying thing is sort of expected. At the same time, it’s actually not as vapid as it may seem, in fact, it’s engrossing enough that I was willing to go along for the ride. And that’s a pretty thrilling ride down to its wacky and bombastic conclusion.

Have you seen Lucy? Well, what did YOU think?

Oh boy, where do I begin. Honestly, I dreaded writing this review. At first glance, the premise seems like it has potential. A mafia boss and his family under the witness protection program are relocated to a sleepy town in France for snitching on the mob. Even under the surveillance of CIA Agent Stansfield and his men, things quickly go awry as The Manzonis, er The Blakes as they’re now called, have a hard time fitting in. Can’t teach old dogs new tricks they say, especially when those dogs are a Brooklyn mob family who are so set in their ways in dealing with problems.

Now, add a dream cast, well dream trio really: Robert De Niro, Michelle Pfeiffer, and Tommy Lee Jones, naturally I expect at least a decent dark comedy. Alas, this turns out to be THE biggest dud I’ve seen on the big screen so far. I was pretty close on walking out a few times as the movie seemed to go on forever with barely a single laugh coming out of my mouth. Saying this movie is contrived is putting it mildly. Every single scene is seething with bad taste and every Mafia clichés imaginable, not to mention every French and Italian/American stereotypes. What’s worse, you can figure out the plot from miles away. Even the way the Brooklyn mafia clan find out where they live is so predictable it’s downright irritating.

It’s really quite painful to watch great actors in something this terrible. Y’know, sometimes I don’t mind ridiculous, heck, I’d even tolerate absurdity. But a comedy that’s entirely unfunny — especially with THIS cast — is excruciating. Trust me, I wish I didn’t have to be so harsh but I kept hoping for one redeeming moment, but nope, that moment never came. Ok, there is one scene towards the end but it’s so self aware at its own joke that it feels so forced and exploitative. That scene too, was entirely predictable! I could tell the whole theater wasn’t enjoying it as I didn’t hear much laughter from start to finish, maybe a chortle or two… or perhaps a snicker?

De Niro has done similar comedic role that’s poking fun of the mob in Analyze This. To be honest with you, I’m kind of tired of that shtick, it’s only fun for maybe two seconds. Now, De Niro and Pfeiffer didn’t exactly phone it in here, I give ’em that, but I’d think they’d recognize a bad script when they see it by now? I’m a big fan of Tommy Lee Jones with his deadpan delivery but here he looks bored the entire time, like he couldn’t be bothered. Hmmm, perhaps that should be a warning to moviegoers?

Tonally, it’s all over the place, Besson just can’t seem to get his footing on what kind of movie he wants to make. I think he aims for a dark comedy but his approach is more like ‘shooting in the dark and see what hits,’ resulting in a misfire no amount of talent could save. It’s astonishing to read later on that Martin Scorsese is one of the executive producer, wow!

The subplots involving the Manzoni’s kids are so uninspired, but not exactly the fault of the young actors. I think John D’Leo and Glee actress Dianna Agron were serviceable enough, D’Leo is especially believable as a sly kid who learned everything from his wiseguy dad. Agron’s role as a principled virgin who takes pleasure in beating people up is so oddly-written though. In any case, the family’s German Shepherd still made more of an impression to me than those two.

There are violent scenes and profanities abound here, which warrants the R-rating. Perhaps people who are into mob movies might dig this one more than I did, but, really fans of any of the main stars here deserve better. Sorry to De Niro fans out there, but I think this Screencrush reviewer said it best: Robert De Niro‘s name on a film project is now more a red flag of warning than a sign of quality. Same with Luc Besson I guess, so don’t expect this to be remotely as shrewd as The Professional and Transporter/Taken film. If you want an action comedy from Besson that’s actually watchable, I guess just rent or rewatch The Fifth Element. By the third act, I was hoping someone would actually take a hit at the whole Blake family and spare us from our misery. I use the word complacent in my review of The World’s End and that’s a word I could use for the major talents involved here, too.

Well, what do you think of this one? Let me know your thoughts.