Since it’s the week of the Oscars, I’ve been preparing my predictions and also an Oscar-edition of Everybody’s Chattin’ series. That’s on schedule for Friday but today I just want to pick your brain a bit today, so hope you’d indulge me. 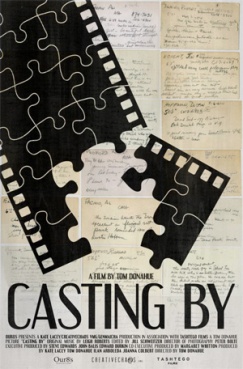 I just found out about this post from Flavorwire site (thanks to @WordandFilm tweet): New Oscar Categories We’d Like to See — And Who We’d Nominate to Win Them. They have about five different category suggestions, but I really like the Best Ensemble category (like in the SAG Awards) and also honoring Casting Directors in the Best Casting category. I totally agree w/ the article in that “casting directors are the unsung heroes of the industry… The work they do is often key, yet widely devalued and misunderstood.”

From that article, I also learned about this awesome documentary Casting By that highlights the career of Marion Dougherty, who was the first casting director to receive single-card screen credit. Based on the review on IMDb, the film features a bunch of footage of first roles given to future stars, i.e. Warren Beatty, Marlon Brando, and James Dean, who was apparently one of the first actors she had cast.

Now, back to the Best Casting question. If I to take all the casting in 2012 films, obviously some worked out and some didn’t. On the top of my head I think I’d the award to the casting director(s) of Silver Linings Playbook for casting Jennifer Lawrence as an unstable young woman struggling with the loss of her husband.

I just think she’s just perfect in the role, wise beyond her years even though she’s just entered her legal drinking age of 21 when the film was made! I really can’t picture anyone else in the role that could do an equally effective job. Now, I’m sure there are others that have made an excellent casting decision – whoever cast nine-year-old Quvenzhane Wallis in Beasts of the Southern Wild obviously has a keen eye for talent. I haven’t seen the film yet though, so can’t say much about her acting.

As for the worst, well I’m going to *honor* Hollywood’s most famous young couple Robert Pattinson and Kristen Stewart in their roles in Bel Ami and Snow White & The Huntsman, respectively.  I’ve already made my feelings known about the vacant *acting style* of K-Stew in my review. As for Pattinson, he was so ill-fitting and utterly unconvincing as the supposedly seductive and manipulative George Duroy, the protagonist from Guy de Maupassant’s classic novel. It’s even worse seeing him [over]acting opposite real thespians Kristin Scott Thomas and Uma Thurman in the film! I’d think just by casting different [read: more capable and expressive] actors in the leading roles would improve both films significantly!

If there were a Best (or Worst) Casting award, which film would you give that award to and for which actor/actress?

Interesting title. I don’t think Robert Pattinson will ever that problem for quite some time now. With a slew of teeny-boppers — and their moms — swarm the theater to see New Moon, I couldn’t help being intrigued by the trailer of R-Patz new flix. Check it out below:

Pattinson plays a rebellious young man who has a strained relationship with his father. Tyler, who lives in New York City, is a guy who tries to break every rule. He thought no one could possibly understand what he was going through until the day he met Ally through an unusual twist of fate. However, their newfound relationship is threatened after Ally witnesses her mother’s murder and Tyler deals with the suicide of his brother, causing his parents to divorce. Moreover, hidden secrets are revealed and the circumstances that brought them together slowly threaten to tear them apart.

Pierce Brosnan plays his distant father, and they actually look believable as relatives. The rest of the excellent cast include Chris Cooper and Lena Olin, hmmm it can’t be that bad if Mr. Cooper is involved. But it’s clear this is a Pattinson’s vehicle, as the floppy-haired young Brit makes a real attempt to find a career beyond Twilight. The role doesn’t seem much of a stretch though, he’s still brooding and cranky like Edward, but at least he doesn’t sparkle =) I got to admit the guy is pretty nice to look at, though having seen the vampire flix once, I really don’t get what the fuss is about. But hey, I’m not going to bash someone’s taste, I mean we all have our guilty pleasures. It’s mostly the manic reaction and calculated overexposure that’s what’s sickening about it. To be fair, I think R-Patz and Kristen Stewart are probably a pretty gifted actors, and I for one would rather see them in other (read: better) flix.

Speaking of which, shortly after this trailer is released, it’s reported that Uma Thurman has joined the cast of his new flix Bel Ami, based on Guy de Maupassant’s short story of the same name. The story tells of George Duroy (Pattinson), a young journalist who rose from poverty to become one of the most successful men in Paris via the ruthless and calculating bedding of the city’s most glamorous and influential women. Sounds like a tailor-made role for the Hollywood boy du-jour, wouldn’t you say?

Kidman was rumored to have gotten the part earlier, but apparently it wasn’t a done deal. According to The Hollywood Reporter, British actress Kristin Scott Thomas also has joined the cast. Thurman’s role will be the wife of Duroy’s friend, a woman who is extremely involved and connected in the goings-on of Parisian society. She helps Duroy in his ascent, later becoming his wife. As for Thomas, she will play a socialite who falls for Duroy, becoming clingy in the process.

Let’s see how the young heartthrob fares against the two accomplished ‘mature’ actresses.