In the antebellum United States, Solomon Northup, a free black man from upstate New York, is abducted and sold into slavery.

I saw this film two months ago and it was an early screening at 11 in the morning. I made the mistake of going back to work after this, as I was so shaken by it I could barely concentrate on even the simplest tasks. It’s the kind of film that’s perhaps seen alone or at least not with a big group of friends, because it would leave you so speechless afterwards that one would not be good company for a lively conversation.

The title says it all, it’s an incredible story of a formerly-free black man ended up sold to slavery and having to endure it for twelve agonizing years. Based on an autobiography written in 1853, the fact that Solomon survived this ordeal doesn’t exactly make this retelling any less harrowing, director Steve McQueen makes sure of that. The way the story is told is pretty straight-forward, we see Solomon with his family in Saratoga Springs, New York. An educated man and trained violinist, he lives a good life with his wife and two kids, until one fateful day when two men claiming to be from a touring circus duped and drugged him. That following morning, Solomon finds himself chained to the floor, no doubt it’s the start of the darkest decade of his life.

This is the first film of British filmmaker Steve McQueen that I saw. As I wasn’t familiar with McQueen’s previous works, the main draw for me is Chiwetel Ejiofor and he absolutely delivered. It’s as if I wasn’t watching an actor simply playing a role, Ejiofor became Solomon and everything from his mannerism to his soulful gaze lends authenticity to the character. What happened to Solomon is tragic and he’s a victim to be sure, but there’s a defiant strength in him that’s so compelling. “I don’t want to survive. I want to live.” He says, at one of the pivotal moment in his journey, and as life deals him one nasty blow after another, he clings to that glimmer of hope that one day he’d live again.

McQueen doesn’t spare us the goriest and most vicious details of Solomon’s, as well as his fellow slaves. It’s truly an emotionally—and at times physically—draining experience watching this film as we’re subjected to several unflinching & sadistic violence that seems to go on forever. Though I appreciate the fact that McQueen doesn’t sugarcoat the story to make it more palatable, at times the extensive whipping scenes feels like it overpower the story. The whipping scene is bound to be one people talk about most, but there is also one incredibly disturbing scene involving Solomon half way through the film. It’s particularly harrowing not only because of the act itself, but the reaction of his fellow slaves around him. McQueen kept this scene on screen for a long time, too long for comfort, and that’s exactly the point. Yet it’s not just the brutal violence that really tug your heartstrings, I was practically sobbing watching the scene where Solomon was trying to write but simply couldn’t make the ink solid enough to use. It made me think how I’ve taken for granted the seemingly-simple things I have in my life.

The film intermittently shifts its focus from Solomon to the slave owners, particularly Edwin Epps (Michael Fassbender), whose brutality is matched only by his own wife (Sarah Paulson). In many ways, Mrs. Epps is actually scarier than her husband. Hell hath no fury like a woman scorned, they say, and boy it’s never more true here seeing a woman so madly-driven by jealousy that she couldn’t even recognize the intense suffering of fellow human beings. The subject of that sheer jealousy is Patsey (Lupita Nyong’o) as she’s the subject of Epps’ sexual urges. Her scenes are the toughest to watch, even the scene containing only dialog between her and Solomon is utterly heart-wrenching.

This film has one of the best ensemble cast of the year and the actors delivered solid performances pretty much across the board. Paul Giammatti and Paul Dano played against type portraying some evil characters, though Dano overacted in his brief scene that it made me cringe. Benedict Cumberbatch gave Solomon a fleeting hope as a compassionate slave owner, but in the end he didn’t really make any real difference. There’s much buzz about the Kenyan newcomer Nyong’o with her devastating performance and she deserves them, but I think Paulson deserves equal kudos for portraying such a wicked persona convincingly. Speaking of which, it’s hard not to think of Epps as a devil-incarnate, yet there’s something in Fassbender’s eyes that somehow make us believe he’s not a soulless creature. Alfre Woodard has a bit part here as well, though I wish her character were explored just a bit more. Lastly, Brad Pitt, who also produced the film, showed up towards the end and it was clear even from the promos that he’s made to be the hero in the film. Well, I’m glad to see his character appears in the film though I didn’t think anything of it about his performance. The heart of the film is no doubt Ejiofor, portraying a man who’s down but not defeated, he somehow remains hopeful despite seemingly-impossible odds. I sure hope this role opens even more doors for him in leading man roles as he’s certainly got the talent and charisma.

As powerful as this film is though, it’s not exactly flawless nor would I call it a masterpiece in the same vein as say, Schindler’s List. As my friend Terrence pointed out in his review, I too feel that the treatment of time passing is way too subtle. I didn’t even notice so much about Solomon aging, which should’ve been more obvious in a matter of 12 years under such duress. John Ridley’s screenplay felt a bit too poetic at times which lessened the sense of realism. I also wish there were more continuation with certain scenes and characters, i.e. the flashback scene where Solomon was approached by a slave whilst he shopping with his family, as there’s no follow-up to that encounter later in the film. I also wasn’t too impressed by Hans Zimmer‘s score. For the life of me I simply can’t remember what it sounds like now, perhaps it was a bit too similar to his previous works. 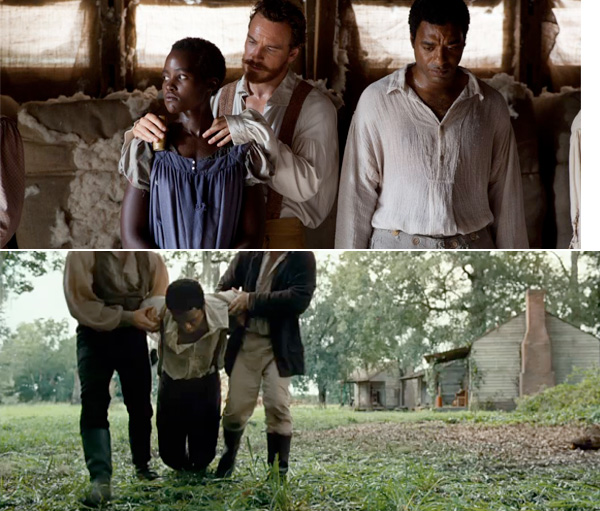 Final Thoughts: Even with the flaws, I still think this is a brilliant film that merits the praises it’s been receiving. McQueen’s meticulous direction with his no-holds-barred approach proves that he’s one of the most talented filmmakers working today, quite a feat considering this is only his third film. This film shows the absolute horror of what the worst of us are capable of, enhanced as well as contrasted by Sean Bobbitt‘s breathtaking cinematography. This is one of those essential films that ought to be seen. Even if it may take you days to recover from, it’s such a worthwhile cinematic experience.

What did you think of 12 Years A Slave? I’d love to hear what you think!

As tonight I’ll be seeing Now You See Me tonight, a crime thriller about a team of illusionists pulling off bank heists during their performances, I thought this week’s music break would have a similar theme of magic. The Illusionist is essentially a love story based on Steven Millhauser’s short story, “Eisenheim the Illusionist.”

The film tells the story of Eisenheim, the the son of a cabinetmaker in Vienna, who uses his abilities to secure the love of a woman far above his social standing.

Before I get to the music, I’m quite fond of this period drama. The cast is wonderful, especially Ed Norton who carried the film with his affecting performance. I also love Paul Giammatti and Rufus Sewell here, both are terrific character actors who rarely disappoint. Even Jessica Biel, who’s not typically a strong actress, seems to acquit herself well here as Norton’s long lost love, though at times she did seem to be out of her elements amongst other more experienced actors. Visually it’s quite beautiful as well, shot by cinematographer Dick Pope who deservedly nabbed an Oscar nomination for his work.

Now, I think Philip Glass should’ve been nominated for his work here as well, as his score is no doubt one of the strongest artistic elements of the film.

…
I love Philip Glass‘ musical style, he’s actually my dream composer for my romantic thriller movie pitch Hearts Want. I first heard his beautiful score for The Hours a few years ago, and I also love his work in The Truman Show. Glass was nominated for three Oscars for his work in The Hours, Notes on a Scandal and Kundun. The Baltimore-born composer utilizes the repetitive structures that some critics would label ‘minimalist style.’ Now, I’m no musical critic, so for me, I’m a fan of his work as his music have a distinct sound unlike any other, and they’re pleasing to the ear.

In this one, he wonderfully captures the romantic sensibility as well as the mysticism and magical tone of the story. According to PhilipGlass.com, Michael Riesman is the conductor and producer of nearly every Philip Glass soundtrack recordings. And here he conducted the Czech Film Orchestra to bring the score to life beautifully.

Another one of my favorites from the score is the Orange Tree track, and the scene in the movie is also one of the major highlights.

Hope you’ve enjoyed today’s music break. What do you think of Philip Glass and/or The Illusionist’ score?