I’m taking a bit of a blogging break and throughout the Summer I’m actually going to blog a bit less as I’m working on my novel/script [still deciding which format it’ll end up to be], plus I just need a break from review writing.

But as I mull over the topic presented by guest blogger Izzy on this post about Gender & Hollywood Screenwriting, it made me feel compelled to write a reaction post of sort. Izzy’s post made me ponder of some of my favorite movie quotes uttered by female characters. As Izzy pointed out, there are far fewer of memorable movie lines by female characters than the male counterparts, even fewer when it’s not romance related or about wanting something from the male co-star of the film. For example, take these two quotes from one of Hollywood’s biggest leading ladies, Julia Roberts:

“I’m just a girl, standing in front of a boy, asking him to love her.” – Anna Scott, Notting Hill

For me, some of the truly memorable quotes are those that represent the strength of the character, those that display their feisty-ness, survival prowess or willful defiant against what society dictate them to be.

Well, after raking my brains, here are five quotes I love from some of my favorite female characters of all time:

All About Eve – It was based on the 1946 short story The Wisdom of Eve by Mary Orr, although screen credit was not given for it (per Wiki) 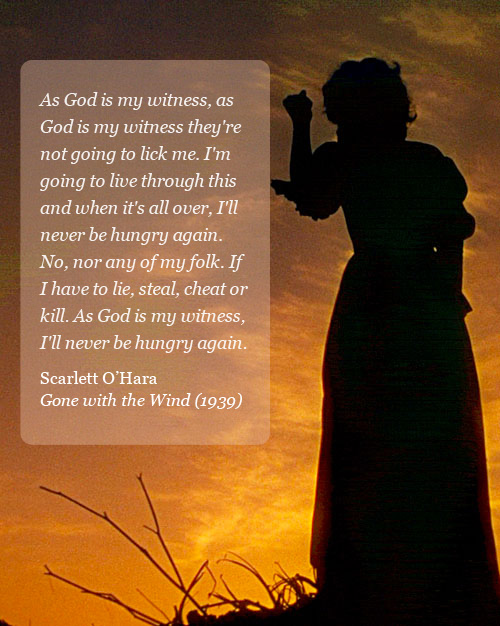 Now, this one I had to put the scene before it to put it in context. Eowyn is perhaps one of the most well-rounded supporting female characters in blockbuster films. It’s no doubt one of the highlights of the final Lord of the Rings trilogy, The Return of the King:

Both Sense & Sensibility and Mansfield Park were based on Jane Austen’s famous novels, which always feature strong female protagonists. I LOVE how both Elinor and Fanny are not defined by romance nor the men in their lives. Though they are in love with men who seem to be unattainable due to the societal norm of the day, they stick to their principles even if they have to emotionally suffer from it.

It’s no surprise that four of the films above are based on narrative stories written by women. And nobody could argue that there’s a shortage of female screenwriters [or female anything for that matter] in Hollywood. It’s a pity because just in the past few years, the movies that made a big impression on me happen to be written and/or directed by women, i.e. In A World, Belle, Beyond the Lights, Brave, Gone Girl, Girlhood (Bande de Filles), not to mention these three French films I saw recently that are women-centric: Thérèse Desqueyroux, Violette and Pour Une Femme (For A Woman). I like them because the protagonists break the female archetypes of women being defined by men, but show women as being the complicated, flawed and conflicted beings that we are.

As my friend Cindy wrote in her comment in Izzy’s Post, women are as complicated as men and their characters should represent that. Let’s hope we’ll see more women being active parts of Hollywood filmmaking process, both in front and behind the camera.

So what are some of YOUR favorite movie quotes by female characters?

Happy Thursday everyone! Today we’ve got a special guest post from Yorkshire. Izzy is writing about a topic that’s dear to my heart and an important discussion point.

So without further ado, let’s dive into Izzy’s post…

How many times in a day do you quote the lines of a TV program or movie? Personally I wouldn’t be able to count the number as my days are littered with “Houston, we have a problem” (Apollo 13, 1995) and “I’ll be back.”  (The Terminator, 1984) sometimes I don’t even realise I’m doing it and I bet you’re the same!

So, when this quiz landed in my inbox:  I thought nothing of it other than ‘I love quotes! I’ll be good at this!’ (As it turns out I didn’t score as well as I’d hoped but that’s irrelevant for now.)

It wasn’t until I was thinking about the quiz a few hours later that I put my literature degree head on (I only recently graduated) and began to analyse the quiz how I had been taught by lecturers, in a way that delves deeper than face-value.

What did I discover?

Well, after some further Googling I compiled this:

The most obvious revelation is that male characters are written more memorable lines.

My second discovery was that a high proportion (but by no means all) of the famous lines spoken by male characters are fueled with aggression, whereas five out of the seven most memorable female lines are projected through love of either a man or family life.

The questions is, ‘Why?’

In 2014 only 15% of Hollywood film script writers were female (with numbers fluctuating around that figure, if not lower, for decades). Again in 2014, females made up only ‘12% of protagonists featured in the top 100 grossing films.’ Again, this percentage seems to have always been the norm.

Those stats can help to explain my findings.

• If 80-90% of Hollywood film script writers are male then it is understandable that they will write male-centric stories with male protagonists.

• If 80-90% of protagonists are male then they are likely to have the most lines in a movie, therefore increasing their chances of having a memorable one.

• We can also assume that 80-90% of characters in Hollywood have had their lines written by a man. This may explain why famous female lines are written with the intention of underlining their affectionate personality- because women are stereotypically affectionate and as a male writer it is easier to write stereotypes than it is to dedicate time to researching the female psyche.

My last thought is a little more obscure and far more open to debate. 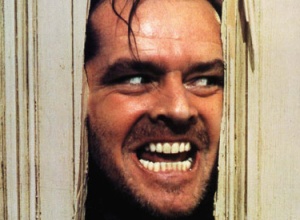 Jack Nicholson came up with ‘Here’s Johnny’ (The Shining) on the spot, as did Robert De Niro with his famous line “You talkin’ to me?” (Taxi Driver). This opens the debate of if male actors embody their characters with more vigour and intensity than their female counterparts. Do they ‘feel’ their characters on a more personal level? Do they have a closer relationships with the people they are playing? Or, as only 2 out of the 18 male lines equals to 11% and 11% of the 7 female lines is 0.77, maybe an incredible, unscripted female line is yet to come…..

This article by Entertainment Weekly’s Jeff Labrecque [in regards to Maggie Gyllenhaal being deemed too old to play the love-interest of a 55-year-old man – ed] highlights that male ‘tastes,’ i.e. a preference to date significantly younger women, is embodied across the cinematic world in terms of casting. It can then only be assumed that male scriptwriters also write female character’s lines in relation to their ‘taste’, as well as based on assumptions as mentioned earlier.

I have great respect for the likes of Emma Thompson who write screenplays such as Nanny McPhee presumably so that she has the opportunity to play a leading Hollywood role regardless of her age, and most definitely without a male screenwriter’s sexual agenda. I cannot wait to see more of the same and experience Hollywood productions written by women for female actors of ‘a certain age’ or otherwise. Kelly Marcel and Sue Smith, writers of Saving Mr Banks, wrote their P.L. Travers beautifully- highlighting their female characters’ insecurities as well as defiance, likeability as well as unpleasantness. It is safe to say that they wrote a well-rounded and very human character, and the sooner this sort of female characterisation becomes the Hollywood norm the better.

…
Izzy S. is a drama graduate with an interest
in literature and screenwriting

Thoughts on this article? We’d love to hear from you!