You wake up to eerie silence. You call out ‘Hello?’ but no-one answers. You’re alone except for a film projector and speakers with infinite battery life and five of your favourite films at the foot of the projector. You have nowhere to be so start watching the films. What are they, where are you and how will your story play out?

I had participated in a similar blogathon over a decade ago where I had to pick 8 films that I’d take with me if I were stranded on a desert island. This is a lot harder as I have fewer movies to pick. Looking back at that post, those films are still my favorites but out of that list, there is only one I’d still include in this list.

So here are my FIVE FILMS picks:

I knew I had to include one classic movie in my collection, and given my love for Gregory Peck, it kinda narrow things down for me 😉 This William Wyler rom-com is one of those movies that’s guaranteed to lift your mood whenever you watch it. The plot may seem straight out of a Disney princess movie but there’s SO much more and it’s deeper than meets the eye… radiant Audrey Hepburn played a princess of an unnamed European country who falls for a handsome, charming American journalist. An eternally enchanting film with a poignant ending that sticks with you long after the end credits.

I enjoy a good superhero movie, so you’ve got to look among the MCU. Well, the Captain America movies make up one of the best trilogies ever and The Winter Soldier is the best of the three. I’ve watched this movie over a dozen times… it’s so immensely watchable, full of amazingly-crafted action scenes that I can watch on repeat. The friendship between Capt and Bucky is the heart of not just the trilogy, but it strongly impacts the storyline of The Avengers as well.

3. The Gods Must Be Crazy

After enjoying a delightful rom-com and a dynamic action movie, it’s time for a genuinely hilarious comedy. It’s really not a tough pick for me as I’ve loved this 80s classic since I was a kid. I used to watch this with my late mom and two brothers and it still made me laugh out loud to this day. The story of a traveling Bushman who encounters modern civilization is simply brilliant. There’s a certain timelessness to its humor, the witty script and slapstick comedic scenes (courtesy of N!xau as Xi and Marius Weyers as Mr. Steyn) always makes me cry with laughter. To this day I’d still say ‘ayayayayay’ whenever I remember this movie 😀 Oh and that Land Rover is a character in its own right!

When you’re all alone in a desert island, you’ve got to have something to constantly lift your spirits. I love Pixar movies and Monsters, Inc. is one of my all time favorites! Mike Wazowski (Billy Crystal) is one of my top 10 Pixar characters, and the movie still remains one of the best from Pixar even two decades later. I actually rewatched this recently and I loved it even more. There are so many details I appreciate now that I missed back then… but the genius is in the story (script by Pete Docter, natch) and the memorable characters. 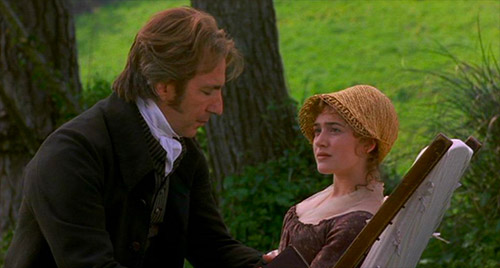 Well, this last pick should be no surprise to most of you. After all, this is my favorite film of all time… one I’ve watched countless times and one that never fails to move me. Elinor Dashwood and Colonel Brandon are two of my all time favorite cinematic characters… in fact, I love the latter much I actually named my lead character in my film Hearts Want after him (Lily Brandon – there’s also the ‘li’ from Elinor).

Sense & Sensibility is actually not my fave Jane Austen novel (that would be Persuasion), but Emma Thompson‘s script and Ang Lee‘s direction actually elevated the material and made it work perfectly for the screen. The agony of unrequited love & ecstasy of finally finding love is realized so beautifully, all mixed in with sharp wit and humor that makes it so fun to watch every time. It’s also a gorgeous movie to get lost in… isn’t escapism what everyone wants in a movie? The acting, scenery, costumes, art direction, music, etc. all work harmoniously to make this a timeless masterpiece. I certainly don’t mind watching this on repeat if I ever get stuck somewhere.

So what do you say, friends? What 5 movies would YOU pick if you were stranded? Let’s hear it!