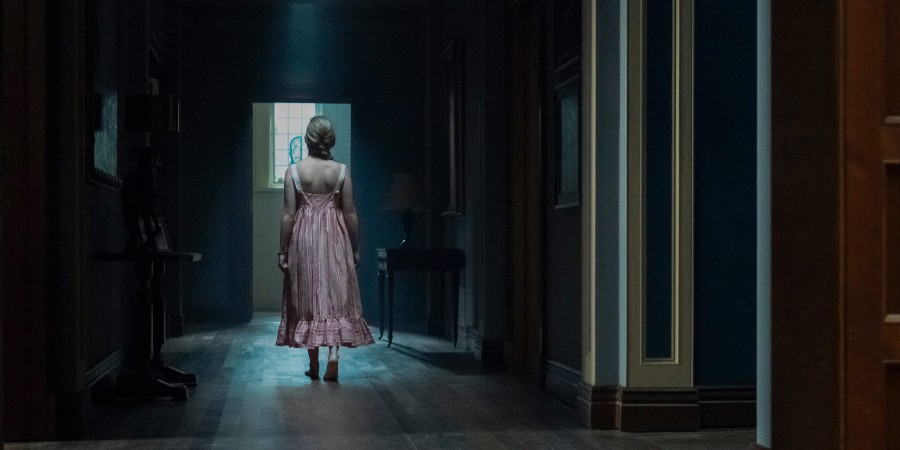 Sorry for the delay on this one! Turns out watching 9 1-hour episodes of a mini-series is difficult to do quickly when you have a full-time job, and for some reason my boyfriend didn’t want to stay up until 3am watching every episode back to back (what a killjoy).

However, I have finally finished The Haunting of Bly Manor, Mike Flanagan’s follow-up to 2018’s The Haunting of Hill House, and am eager to share my thoughts with you. Unlike Hill House, I haven’t read the book this series is based on (Henry James’s The Turn of the Screw) yet, but I plan to, and I’m looking forward to re-watching after reading it and hopefully catching more connections and references.

The Haunting of Bly Manor follows Dani Clayton (Victoria Pedretti) as she starts a job as an au pair to two young orphans, Flora (Amelie Bea Smith) and Miles (Benjamin Evan Ainsworth) at their enormous mansion in the small English village of Bly. Their previous au pair, Rebecka Jessel (Tahirah Sharif), died tragically not long before Dani’s arrival, and her memory, along with Dani’s own dark past, loom over her.

While I didn’t like Bly Manor quite as much as I liked Hill House, I still think it’s an incredibly well-done series. It’s even more of a slow burn than its predecessor, so people hoping to be scared a lot in each episode might be disappointed, although there are still plenty of suspenseful moments and creepy imagery; like Hill House, there are several hidden ghosts throughout the series, and I only managed to catch a few of them on my first watch. There’s much more of a focus on the ghosts’ lives (er…afterlives) and how their existence on the grounds of Bly Manor works, which is an interesting concept that I really appreciated.

Like Hill House, Bly Manor has an incredible cast. There are several actors from the former that appear in the latter; in addition to Victoria Pedretti as Dani, we have Henry Thomas as Henry Wingrave, Flora and Miles’s tormented uncle, Oliver Jackson-Cohen as Peter Quint, Henry’s manipulative and conniving valet, Katie Siegel as Viola Lloyd, the original lady of Bly Manor, Katie Parker as Perdita, Viola’s sister, and Carla Gugino as the storyteller. It’s a lot of fun seeing these familiar faces in different roles getting to stretch their acting muscles, especially Jackson-Cohen, who goes from this heartbreakingly vulnerable character you want to hug in Hill House to a villain you want to punch in the face in Bly Manor.

But while seeing the returning actors in this new season is great, the new cast members are the ones that really shine. Rahul Kohli as Owen, the cook at Bly Manor, is delightful; I adored him in his role in iZombie, and he brings the same humor and likability from that performance to this one. T’Nia Miller as Hannah Grose, the housekeeper, gives a beautiful and gut-wrenching performance, and her chemistry with Owen is so lovely. Tahirah Sharif as Rebecka Jessel is absolutely haunting. Amelia Eve as Jamie, the gardener, is so engaging. And, like Hill House, the child actors in Bly Manor are spectacular. Amelie Bea Smith as Flora is so sweet and funny, but Benjamin Evan Ainsworth as Miles gives the most impressive performance, especially considering how complex his role ends up being.

My only serious gripe with Bly Manor is that it seems to have some pacing problems. This series is one episode shorter than its predecessor, which makes it even more difficult to fit in all the backstory and subplots without it feeling messy. Because there’s less time to flesh out some characters, their character growth feels unearned (specifically Peter Quint), some exposition feels clunky and rushed, and some subplots that were built up as more important are dropped altogether (seriously, what happened with SPOILER [highlight to read] Dani’s confrontation with the ghost of her ex-fiance at the end of episode 4?! They spend the first few episodes hinting at this dark part of her past, and we finally get this moment that might resolve everything, and then it’s just dropped for the rest of the series! Why?! I can understand potentially not having enough material for 10 full episodes, but if they had maybe made each episode a little longer, the pacing might not have been as much of an issue.

Despite the pacing issues, and despite it being less straightforward horror than Hill House, I would still recommend checking out The Haunting of Bly Manor. It’s visually stunning, beautifully written, and expertly performed, and I’m already racking my brain for other classic ghost stories that Mike Flanagan could possibly adapt for season 3. If you have any you think would work, let me know in the comments!

Have you seen The Haunting of Bly Manor? Well, what did you think?

4 thoughts on “FlixChatter Review: Netflix’s The Haunting of Bly Manor (2020)”