Well, it seems streaming content is in our future for a long, long time. If this THR article is to go by, this pandemic isn’t slowing the streaming giant at all. In fact, Netflix continues to spend a gazillion dollars for original films/shows. Well I ain’t complaining!! I’m grateful that my home cinema setup makes it enjoyable for me to watch movies at home.

Here are two I just read about in the past couple of days, both happens to be gothic thrillers, got me super excited! So fall movie seasons isn’t going to be too bleak after all.

THE DEVIL ALL THE TIME

Adapted from the novel by Donald Ray Pollock, the screenplay of this Southern gothic thriller is written by director Antonio Campos (Christine) and his brother Paulo Campos.

In Knockemstiff, Ohio and its neighboring backwoods, sinister characters—an unholy preacher (Robert Pattinson), twisted couple (Jason Clarke and Riley Keough), and crooked sheriff (Sebastian Stan)—converge around young Arvin Russell (Tom Holland) as he fights the evil forces that threaten him and his family. Spanning the time between World War II and the Vietnam war, director Antonio Campos’ ‘The Devil All the Time’ renders a seductive and horrific landscape that pits the just against the corrupted.

Now, I’m not typically into horror movies, but man, check out THIS cast!

Now check out the trailer!

Interesting to point out that even though the story is set in Knockemstiff, Ohio, most of the cast are not from the States. Riley Keough is the only American actor here, the rest are English, Australian, Swedish and Romanian descent. Fun seeing Batman-to-be Pattinson as a crooked Southern preacher, ahah, and hey, Spidey is pointing a gun at him 😀

This trailer promises something truly disturbing. I’m not a horror fan but I’m curious to check this one out. Fortunately it’s on Netflix so I can just turn it off it it gets to be way too scary for me, without worrying about making my money worth for the rental fee! 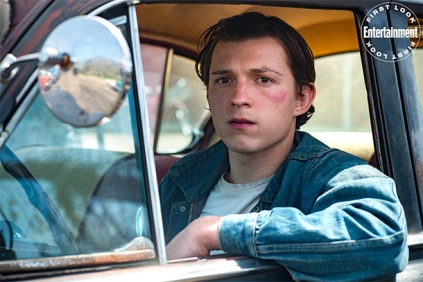 While the movie is set in Ohio and West Virginia, it was actually shot in Alabama. Per EW, Campos said “It was a challenging shoot just because there were so many locations and we were really spread out over a large portion of northern Alabama… The nice thing is Alabama hasn’t been filmed in very often, so it’s not as recognizable as some other places that have been filmed in and photographed thoroughly by various films and TV shows.”

Tom Holland and Robert Pattinson have previously worked together on The Lost City of Z, in supporting roles. It’ll be nice to see them team up again, and now Holland is a legitimate movie star since playing Spider-man. Oh, and speaking of Marvel superhero, initially Chris Evans was to portray Sheriff Lee Bodecker, but was replaced by his bff Bucky, er Sebastian Stan in the role.

The movie is scheduled to hit Netflix on Wednesday, September 16th, 2020.

Now this one is something many people should be familiar with, especially if they’re into Hitchcock classics. The most famous adaptation of the 1938 Daphne du Maurier’s novel of the same name starred Laurence Olivier and Joan Fontaine in 1940.

After a whirlwind romance in Monte Carlo with handsome widower Maxim de Winter (Armie Hammer), a newly married young woman (Lily James) arrives at Manderley, her new husband’s imposing family estate on a windswept English coast. Naive and inexperienced, she begins to settle into the trappings of her new life, but finds herself battling the shadow of Maxim’s first wife, the elegant and urbane Rebecca, whose haunting legacy is kept alive by Manderley’s sinister housekeeper Mrs. Danvers (Kristin Scott Thomas).

I also LOVE the cast on this one… 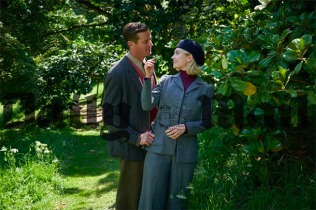 Armie and Lily are such an intriguing pairing and Kristin Scott Thomas as Mrs. Danvers is just brilliant! Based on this Daily Mirror article, Kristin’s so believable in the role that she terrified her co-star. I’m a huge fan of Sam Riley too, always glad to see him in any role!

The article also mentions how the Manderley house is a character in itself, as it should be! It’s got Oscar-nominated production designer Sarah Greenwood who did Atonement which also has a memorable English estate in it. I’m curious to see Ben Wheatley in this, as he’s someone mostly known for his shoot-em-up action flicks like Kill List and Free Fire.

We now have a trailer!

Reportedly REBECCA will premiere on October 21 on Netflix.

9 thoughts on “Netflix FIRST LOOK: The Devil All the Time + Rebecca – coming this Fall”