Last Call is a technical feat. It is a continuous shot film made doubly impressive by the fact that it is a split screen for the entire movie. That’s right. Last Call is a continuous shot film twice over. One screen is entirely devoted to single working mother Beth (Sarah Booth). The other features Scott (Daved Wilkins, also one of two writers on the project). Scott is a suicidal, depressed man who tried to call a help line, but mistakenly called the school where Beth is currently working as the night janitor.

Last Call opens on Beth driving to work and Scott finishing a long string of drinks at a local bar. Their stories don’t intersect until Scott settles into a worn couch at his apartment with, you guessed it, a freshly poured drink. He hesitantly dials the number he has been saving for a day as bad as this one and in that moment the two stories become one. 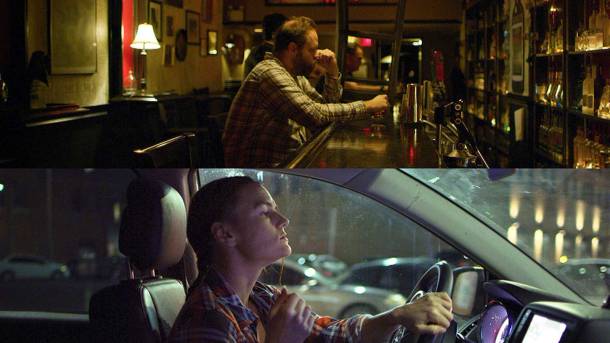 At first it seems unlikely that the two would stay on the line together. Scott called the wrong number, why wouldn’t he just hang up? Beth is at work and is worried about her son missing curfew. But at second glance their choice to stay on the line makes so much sense. Scott doesn’t have anyone else to talk to and before Beth realizes the stakes of the situation, it’s probably nice for her to have something other than her rising panic about her son to occupy her brain space.

Last Call is directed Gavin Michael Booth, who is the other writer of the project. What he accomplished (what the entire team accomplished, really) in directing this project is no small feat. Pulling off a dual split-screen is one thing from a purely technical standpoint (Were both shot at the same time? How close were the two sets? How many times did the actors rehearse on set? Did they shoot it more than once? I have so many questions!), especially considering how many props are involved, how extensive the set is, and how emotionally taxing the script is. 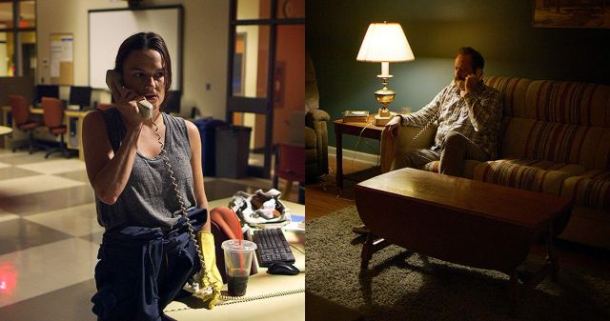 I understand the bragging rights behind making a continuous shot movie and I would love love love to see the behind the scenes of this entire project. But apart from the split screen giving me the ability to choose which actor I looked at in any given moment (like theater! so novel!) it didn’t really add anything to what is a strong story on its own. Several times I wished for a “normal” movie because a shot was blurry or shaky or a transition from horizontal to vertical split-screen was a little too reminiscent of Microsoft Powerpoint circa the early 2000s. But, ultimately, I did enjoy the shtick of it, so ignore me.

Aside from my tiny reticence about the continuous shot shtick, I did have a couple other small issues with the movie. There are several moments in the script that don’t feel organic; conversations that felt forced. I had to convince myself into thinking that Beth would have stayed on the line with Scott (said logic is conveniently laid out for you above). The end (no spoilers) is almost too intense after what is mostly a mellow ride through the story. But. All that said, I’m going to go out on a limb (a precarious limb) and say that this might be one of the best independent features at TCFF this year. It is skillfully directed; has a gorgeous soundtrack; feels more like weird new-age theater than film; and is a feature length, mumbled conversation that you want to eavesdrop on.