Dora and the Lost City of Gold is a new family adventure live action film, based on the popular Nickelodeon animated television series Dora the Explorer. If you are like me (and you don’t watch Nickelodeon on a regular basis—OR AT ALL!!), you may have heard of Dora the Explorer from Saturday Night Live’s TV Funhouse animated skit spoof, where they switch Dora’s name with the name “Maraka”, and do pretty much what Dora does on Nickelodeon but with the SNL twist.

“Hola. Hello. I’m Maraka. Soy Maraka,” says Maraka, standing next to an animated kitten. “Do you know who this is?” ask Maraka to the audience. “That’s right, I’m Mittens. Soy Mittens,” says the animated kitten. “Mittens is a cat. Mittens es un gato,” continues Maraka. And then Maraka throws you a curve ball: “Do you like Penguins?” Both Maraka and Mittens wait for five or six seconds, blinking here and there, while they wait for your answer. “Me too! Mittens and I are on our way to Penguin Island. Can you break a fifty?” asks Maraka, showing you a fifty dollar bill. Then they’re off on a hot balloon ride towards Penguin Island, breaking out a song—in English AND Spanish. And this is all you need to know to understand what makes Dora the Explorer so unique and strange animation at the same time.

Similarly to the Saturday Night Live version of Dora the Explorer, the movie Dora and the Lost City of Gold introduces you right away to a young version of Dora (Madelyn Miranda) and her cousin Diego (Malachi Barton) who are living somewhere in the jungle, each with their parents. Dora has an animated monkey, Boots (voiced by Danny Trejo), who is her sidekick in jungle exploration. Of course, he understands her and speaks to her. One day, Diego’s parents decide to move to the city (somehow that ends up being Los Angeles). That leaves Dora to stay with her parents, going on adventures exploring the jungle. A few years later, an older, teenaged Dora (Isabela Moner) is told by her mother Elena (Eva Longoria) and father Cole (Michael Peña) that they have found an Incan treasure that they had been on the hunt for years, but she couldn’t come with them to find the treasure. Instead, she would be sent to live with her aunt, uncle and also-teenaged cousin Diego (Jeff Wahlberg) in the city.

Once she arrives in Los Angeles, Dora finds Diego less-than enthusiastic about her arrival, seemingly being a normal American teenager who is embarrassed by his cousin’s exuberance. The next day, they are sent to high school in the city, and Dora being herself sets off the school metal detectors with all kinds of tools and weapons used in jungle, found inside her school backpack. In class, Dora seems to be one of the smartest students, being home-schooled by her parents, but has competition from another girl named Sammy (Madeleine Madden). Dora is mostly ignored by her cousin Diego throughout the day; while in the lunchroom (she does complement all the lunch ladies and lunch gentlemen, of course) she befriends another geeky student named Randy (Nicholas Coombe) and develops a crush on him. Later, at a school dance Dora embarrass Diego yet again, which frustrates him to no end and alienates him from his group of friends.

The next day, while on a school trip the Museum of Natural History, the students are told to make groups of four and go on a scavenger hunt. All students form groups…all but Diego, Sammy, Randy and Dora. Left with no choice, they form the last group and are led to the basement by a museum docent who overhears their conversation about the scavenger hunt. They get tricked and are locked inside a large crate, then knocked out by sleeping gas. Once they wake up, they find that they have been flown on an airplane to the jungle. They get unexpected help from a guy named Alejandro (Eugenio Derbez) who tells them that he is a friend of Dora’s parents and is here to help them. While being chased by the treasure-hunting mercenaries, the teenagers and Alejandro escape into the jungle to try to find Dora’s missing parents. The treasure-hunting mercenaries are hot on their trail, and are aided by the sly animated character Swiper the Fox (voiced by Benicio del Toro). 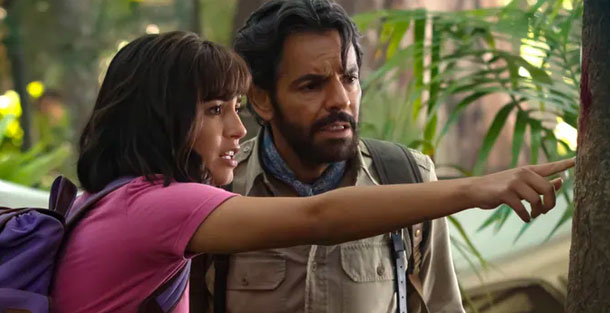 Soon enough, the teenagers and Alejandro find Dora’s parents, but it turns out that Alejandro isn’t the savior he claims to be but is ***SPOILER*** (highlight to read)working with treasure-hunting mercenaries to find the long lost Incan treasure for himself.  This doesn’t come as a shocker, because if you have been following the story all along, you would realize that Dora’s parents have been safe all along and were just out of communication range while in the jungle. Luckily, the teenagers and Dora’s parents escape from the treasure-hunting mercenaries, and find the long lost Incan city of gold. This is where the movie turns more into Indiana Jones than it does Dora The Explorer . There are booby traps, gold idols and even Inca Princess Kawillaka (Q’orianka Kilcher) makes an appearance. Since this is a family-friendly movie, you can probably assume that all’s well that ends well… and you’d be correct!

The problem with Dora and the Lost City of Gold is that while it may work for a lovable animated child, like Dora, to be engaged in her kid adventures of life, it doesn’t work quite as well with real life teenage Dora, who is trying to be Indiana Jones more than she is Nancy Drew, putting her family and friends in real danger. It’s also bizarre that Dora is accompanied by a cartoony monkey and is being chased by a cartoon masked fox that runs on its hind two legs. Actress Isabela Moner does her best to portray the upbeat, sleuth-y main character, but the lines given to her by co-writer Nicholas Stoller and director James Bobin feel like the belong more like on Nick Jr. than on the big screen. The jokes are very kid-friendly and will make most adults roll their eyes, as they try to land a punchline. What the movie has going for it is that it features a large Latin cast, speaks Spanish and doesn’t try to hide its cultural heritage. Also the actor that stands out the most is Eugenio Derbez, a Mexican actor and comedian that has found his way into some big Hollywood productions recently, including How to Be a Latin Lover and Geostorm.

Overall, Dora and the Lost City of Gold will appeal to those most nostalgic for the animated series, and to those kids who’ve outgrown the cartoons but have not yet moved on to the full-fledged superhero movies. This crowd of moviegoers (and their parents) will carry the film, and I could easily see it turning into a live action franchise for Nickelodeon. Unfortunately, there isn’t enough for adults to enjoy here, and the educational quotient of the movie leaves much to be desired.

Have you seen Dora and the Lost City of Gold? Well, what did you think?