The award season is officially here… can you believe it? [I still don’t believe it’s Winter already, but well, whatchagonnado?] The Golden Globes nominations were announced this morning, and so the reactions for snubs and surprises have dominated social media. So why not add one more for the fun of it.

Before we go into my thoughts on the noms, let me say that I’m thrilled to see Sandra Oh will be hosting the telecast, along with Andy Samberg. Glad she’s amongst the nominees too, wahoo!!

Now about the nominations… per usual, in addition to my thoughts about the nominees, I thought I’d include my winner pick for some of the categories…

Ok so I’ve only seen three out of five, hopefully I can catch up with Bohemian Rhapsody and BlacKkKlansman later this month. Honestly, I’m not as enamored with Barry Jenkins’s If Beale Street Could Talk the way I did with Moonlight. I actually like the acting of the two leads and Regina King, but that’s about it. I am thrilled to see Black Panther breaking new grounds as the only superhero film getting nominated, yay! It’s absolutely well-deserved and of course I’m rooting for that. I loved A Star Is Born too, but I’d give Black Panther a slight edge because it’s not only a fun, entertaining film with substance, but it’s also immensely re-watchable.

Glenn Close (“The Wife”)
Lady Gaga (“A Star Is Born”)
Nicole Kidman (“Destroyer”)
Melissa McCarthy (“Can You Ever Forgive Me?”)
Rosamund Pike (“A Private War”)

I’ve only seen Lady Gaga’s and Melissa McCarthy’s performances, man what a list!! No doubt Close, Kidman and Pike all give worthy performances, but I was truly impressed by McCarthy’s sensitive and nuanced performance as Lee Israel. Balancing comedy and drama is so tough, and I thought she did a terrific job playing a rather unlikable character.

Gaaah I have only seen Cooper’s performance here 😦 I’m not going to pick a winner as I should at least see two performances of the list. But if Cooper does win, I’d be totally ok with it as I think he delivered a tremendous performance in his directorial debut (my review of A Star Is Born)

Ok so most of you know just how much I adore Crazy Rich Asians and how much representation of Asians (esp. Southeast Asians) in Hollywood matters to me. I have to say that Green Book also really moved me. Both films have wildly-different style and tone, but both speak about hot button issue of race with humor. I LOVE the cast in both films too, which made it all the more difficult to choose between the two! 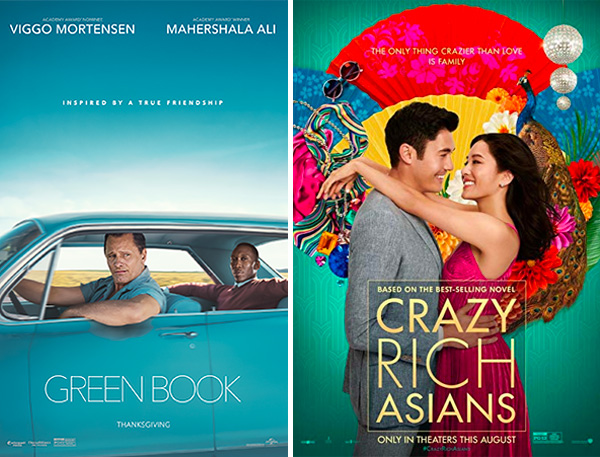 Best Actress in a Motion Picture – Musical or Comedy

Firstly, where in the world is Viola Davis??!??! Come on HPFA! She was simply phenomenal in Steve McQueen’s fantastic ensemble cast and she’s the heart and soul of that movie. The lack of love for Widows is truly mind blowing!

Ok now that’s out of my system… given that I’m actually rather lukewarm about The Favourite (which is NOT my favorite films of the year), I really love Colman’s performance as the decidedly unlikable and bizarre Queen Anne. The film’s also decidedly riddled with historical inaccuracies (esp. in regards to her lesbian affairs), yet Colman was mesmerizing in the role. I just think Colman is such a deftly talented actress and I’m thrilled to see her finally getting more recognition!

Best Actor in a Motion Picture – Musical or Comedy

I’m still waiting with bated breath for the press screening of VICE (scheduled to be released on Christmas day). Just based on the trailer alone, I’m willing to bet that Christian Bale will disappear once again into his role as Dick Chenney, perhaps the unlikeliest role for the Welsh thespian even in his wildly diverse resume. It’s pure coincidence that both dreamboat actors (Batman and Aragorn) gained significant weight for their respective roles. I LOVED Mortensen’s comedic performance in Green Book, so I’d be truly happy if either one of them win!

Best Actress in a Supporting Role in any Motion Picture

Hmmm, the Hollywood Foreign Press clearly is enamoured (yes I’m using the British spelling here to match the film’s title, ha!) with The Favourite. I personally would love to see one of the ladies from Widows being nominated here (esp. Elizabeth Debicki). But if I had to pick one from THIS list, I’d go with…

Best Actor in a Supporting Role in any Motion Picture

I have only seen Ali and Richard E. Grant who’s excellent as Melissa McCarthy’s randy bff. Everyone seems to be smitten with Timothee Chalamet (I haven’t seen enough of him to form an opinion) but Driver and Rockwell are such great character actors. I do have a soft spot for Mahershala, who’s so elegant and oh-so-regal as Dr. Don Shirley. 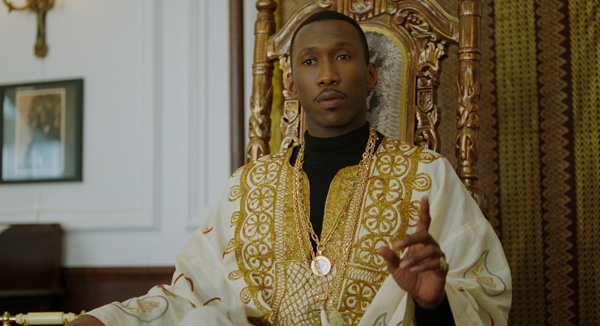 “Incredibles 2”
“Isle of Dogs”
“Mirai”
“Ralph Breaks the Internet”
“Spider-Man: Into the Spider-Verse”

I’m going to refrain from picking a winner as I’ve only seen Ralph Breaks The Internet (see my review and interview with the filmmakers). I am excited to see Spider-Man: Into the Spider-Verse this weekend!

I am ashamed to say I have not seen any of these!! I was hoping to go see ROMA last month at the Film Society, but the schedule just didn’t work out.

Looking at this list… I was really impressed with Cooper’s directorial debut and not surprised at all he’s nominated. However, I don’t think he deserved to win in this lineup. I’ve heard nothing but tremendous praise for Alfonso Cuarón’s ROMA, which chronicles a year in the life of a middle-class family in Mexico City in the early 1970s, starring unknown actors. If I were a betting woman, I’d put my $$$ on the Mexican filmmaker.

Yes I know the movie hasn’t come out yet, but this movie’s already leading the pack with six Globes nominations. Adam McCay could very well score another big win in the screenplay category. He’d won in 2015 for The Big Short, which also had Christian Bale AND Steve Carell in it, both looked utterly convincing as Chenney and Donald Rumsfeld respectively. Physical transformation aside, this political satire has certainly become the one to beat this award season.

This song was stuck in my head for weeks after I saw the movie. Even listening to it again it still moved me to tears. It has everything one wants in a romantic ballad, it has a Whitney Houston vibe to it (circa The Bodyguard) … a truly beautiful and highly-emotional song.

I’ll refrain from making my pick as I’ve only Bodyguard in its entirety. I’ve only seen season 1 of The Americans and based on that alone, I can see why it’s become awards darling for years. I hope to catch Killing Eve just to see Sandra Oh, I’m thrilled to see her finally getting recognition after putting in great work all these years.

Best Performance by an Actress in a Television Series – Drama

As I mentioned above, I can’t wait to see Killing Eve. But given I don’t have cable, who knows when I can finally see the BBC America series. I just read this on the NYTimes … “Spy thrillers almost never cast women as both the cat and the mouse, and this one also features an equally rare female presence behind the camera: The English writer and actress Phoebe Waller-Bridge… is the series’s lead writer, showrunner and executive producer.” Just for this reason alone I’m rooting for this show to win! Miss Oh missed out on becoming the first woman of Asian descent to win an Emmy in the lead actress category, I’m hoping she has a better chance in snatching the Globe since Claire Foy is not amongst the nominees. 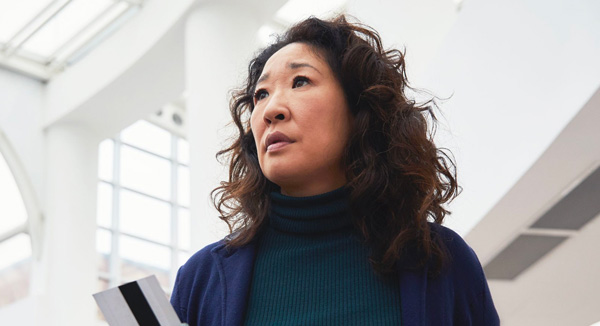 I’m going to refrain from picking my winner picks in these TV categories. Yes I have picked winners from films/shows I haven’t seen before, but I don’t have any strong hunch or feelings about the following shows and performers to make up my mind.

Best Performance by an Actor in a Television Series – Drama

Best Television Limited Series or Motion Picture Made for Television

Best Performance by an Actor in a Supporting Role in a Series, Limited Series or Motion Picture Made for Television

Best Performance by an Actress in a Supporting Role in a Series, Limited Series or Motion Picture Made for Television

Ok so I have only seen Borstein and Newton’s (in S1 of Westworld) performances. I absolutely love Borstein’s performance as Susie in The Marvelous Mrs. Maisel that I kind of want her to win every time she’s nominated!

Well, for me it’d be 15-year-old star of Eighth Grade, Elsie Fisher. I haven’t heard of her before this one, and the film wasn’t exactly on my radar. Well good for her, she’s actually done a ton of projects in her young career.

I think VICE being the leader of the pack at the Globes and possibly at the Oscars could count as a surprise to most people. I really can’t wait to see that movie!!

Well firstly, the obvious… where are the female directors?? I mentioned it above in the Best Director category, and for one I thought Josie Rourke who directed Mary, Queen of Scots might have a shot. And there’s Mimi Leder, director of On The Basis of Sex, who hasn’t directed a feature film in ages!

As for the performers… let’s start with Viola Davis in Widows.

I mean… I was quite floored NOT to see her name amongst the Best Actress category. She’s truly amazing as the leader of a fantastic ensemble cast and her performance is simply outstanding. The lack of love for Steve McQueen’s Widows baffles me. There are themes of social, economical, political and racial divides, not to mention a female empowerment story that makes it SO much more than a cool popcorn thriller.

I haven’t seen the film yet but based on the reviews of Hereditary (including ours, by Laura S), I thought Toni Collette’s nomination is a shoo-in [shrug].

So what are your thoughts on the Golden Globes nominees? Who do you think are snubbed and who are you rooting for?