M. Night Shyamalan has struggled over the years to regain his early 2000’s glory. From a movie about trees compelling people commit suicide, to a horrible adaptation of a beloved animated series, several of his more recent films have been flops. His newest movie, however, has been attracting a lot of attention, and people are wondering if it might be a return to the tense, unique thrillers that originally made Shyamalan a household name. Does it deliver? In addition, can a movie with an antagonist whose defining characteristic is a legitimate mental disorder succeed without being offensive or painfully inaccurate?

In Split, three teenage girls (Anya Taylor-Joy as Casey, Haley Lu Richardson as Claire, and Jessica Sula as Marcia) are kidnapped by Kevin (James McAvoy), a man with dissociative identity disorder. Kevin currently has twenty-three personalities who are awaiting the arrival of a new, mysterious one who is simply called The Beast. The girls must figure out which personalities they can trust or manipulate to help them escape.

While this film had its problems, it was still one of the better ones I’ve seen out of Shyamalan in quite a while. It starts out tense and is suspenseful the whole way through; at the risk of sounding cliché, I was on the edge of my seat the whole time, watching the girls’ constant attempts at escape and tense interactions with Kevin’s multiple personalities. James McAvoy gave a fantastic performance, managing to portray nine different personalities without overdoing any of them in an attempt to make them distinct. The actresses playing the kidnapped teenagers gave great performances as well, especially Anya Taylor-Joy as Casey, and hopefully we’ll be seeing more of their work in the future. 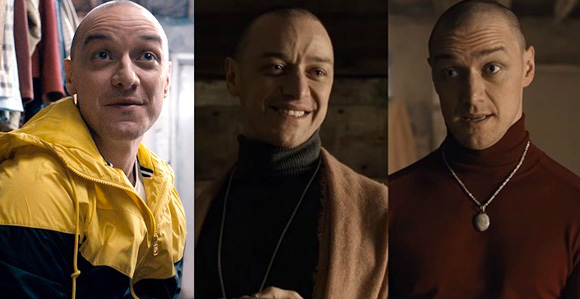 That said, this was far from a perfect movie. There were some moments where the tone felt a little confused, and I wasn’t sure if the audience was supposed to laugh or feel unnerved. Much of the exposition comes from Kevin’s psychiatrist, Dr. Fletcher (Betty Buckley), and the way it’s presented is pretty clunky. Then, of course, there is the portrayal of dissociative identity disorder. Is it insensitive or inaccurate? To answer that would spoil Shyamalan’s signature “twist,” so you’ll have to highlight this next part in order to see it [SPOILER ALERT] Based on the climax of the movie, it appears whatever Kevin suffers from isn’t dissociative identity disorder, but some sort of supernatural ability to not only be host to multiple personalities, but to change physically depending on the personality. When The Beast finally makes his appearance, Kevin’s muscles grow and his skin thickens, earning him near invincibility. He can easily climb walls and ceilings and receive multiple gunshots without being taken down. So because the antagonist doesn’t actually have this specific mental disorder, I can’t say it was portrayed insensitively, since technically it wasn’t what was being portrayed at all.

The twist doesn’t come out of nowhere- it’s hinted at during a session between Kevin and Dr. Fletcher- and, for people who are familiar with Shyamalan’s style, one could almost predict it from the plot summary alone (maybe not the exact details, but at least the general idea). As far as accuracy, Dr. Fletcher does discuss her research on physical changes in individuals with DID, some of which sounded pretty far-fetched, but upon further research (Google searches during my lunch break at work), I found that much of what she said in the movie is based on actual DID cases, so at least the little they did include regarding the actual disorder was mostly based in reality.

Split isn’t necessarily a major comeback for Shyamalan, but it’s still an interesting watch, and it’s definitely worth checking out if you want to see a solid acting performance

Have you seen ‘SPLIT’? Well, what did you think?